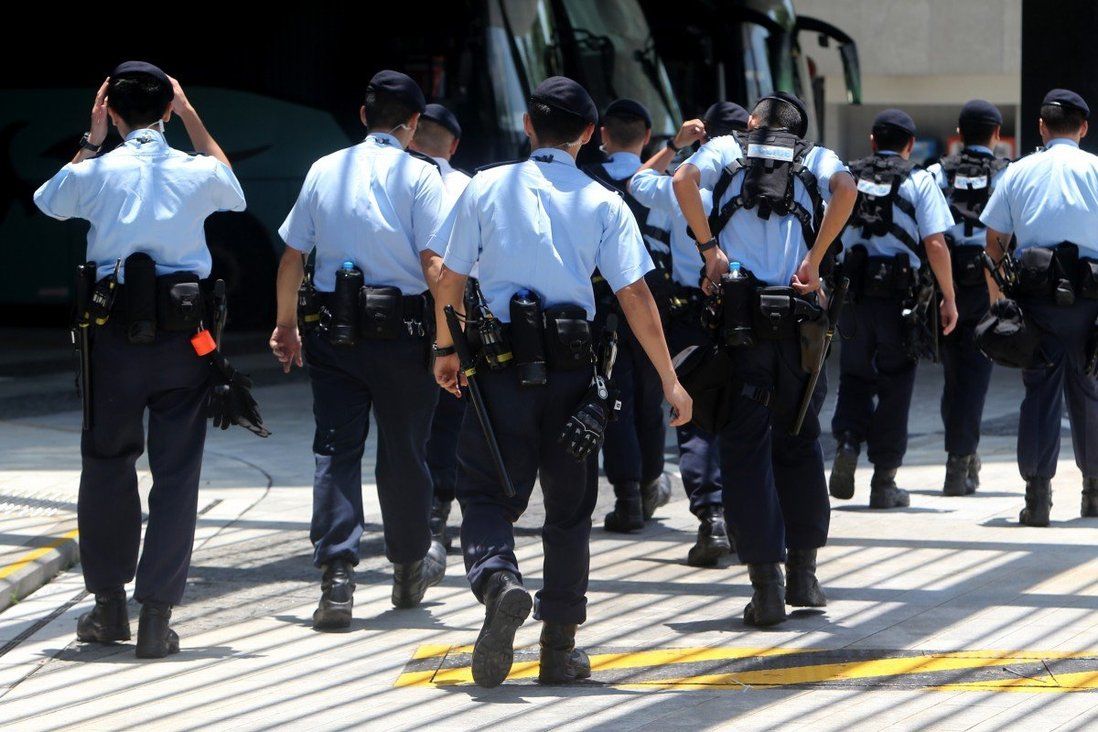 Hong Kong police to put 10,000 officers on streets for July 1, may shut down Victoria Park

While no intelligence currently points to signs of unrest, force has to ensure it can respond to ‘untoward incidents promptly’, police source says; water cannons, armoured vehicles to be kept on standby.

The police force will deploy some 10,000 officers across Hong Kong on Thursday – with contingency plans in place to lock down Victoria Park if necessary – as the city marks the twin anniversaries of its return to Chinese rule and the founding of the Communist Party, according to insiders.

The heavy security blanket comes on the heels of Tuesday’s arrest of two people suspected of possessing weapons and explosive substances at their homes, and threatening to “kill well-known figures” and create “bloodshed” at police stations. Authorities have not ruled out the possibility that the pair were planning an attack for July 1 – which is both the 24th anniversary of the end of British colonial rule and the party’s centenary.

Separately, three activist groups lost an appeal against an earlier police decision to deny their application for a rally on the day protesting against “political suppression”. 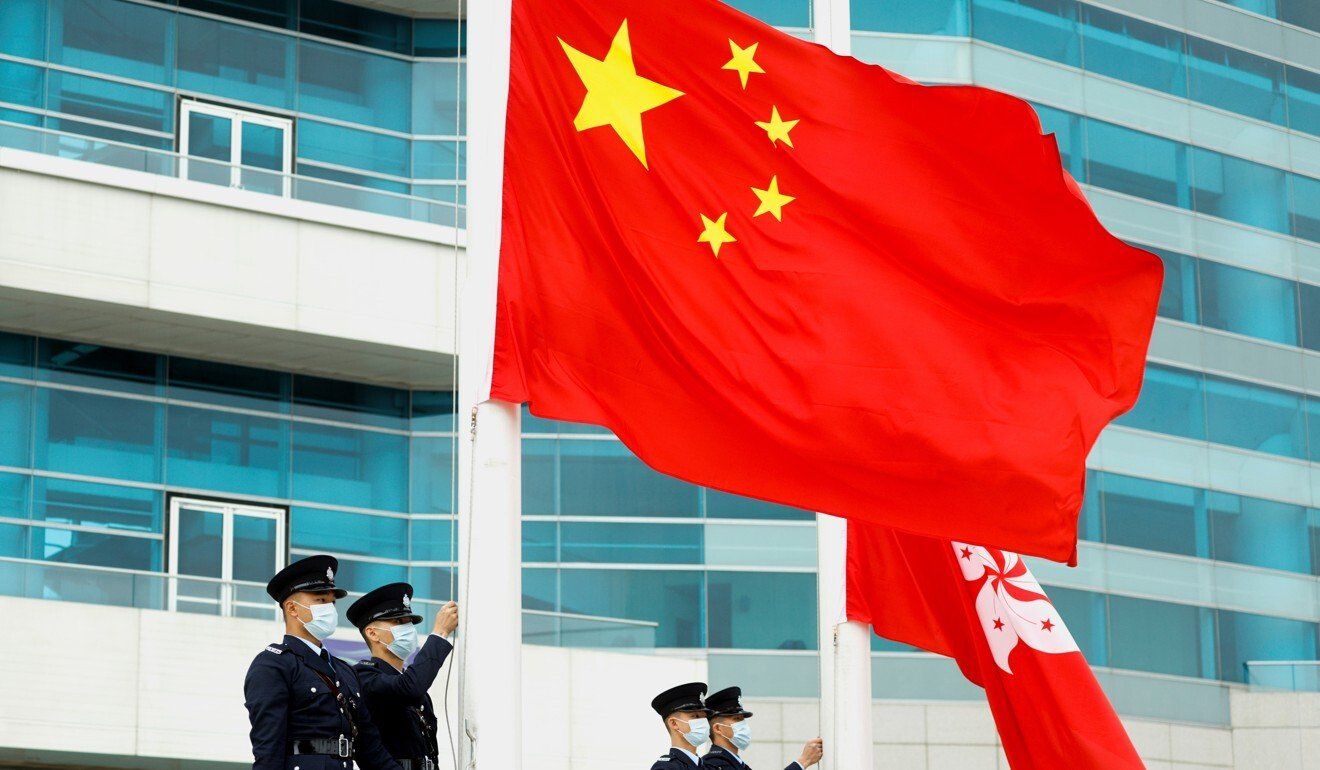 Police officers raise the Chinese and Hong Kong flags at a ceremony in Golden Bauhinia Square.

While current intelligence did not point to any specific trouble brewing on Thursday, one senior police source said, the force had to “ensure there is sufficient manpower ready to respond to untoward incidents promptly”.

“We will take reference to our operations on June 4 this year and close Victoria Park if necessary,” the insider said, referring to the force’s unprecedented decision to lock down the space to prevent anyone gathering for the city’s annual Tiananmen Square vigil, which was also banned this year.

“It depends on if there are online appeals for people to turn up at the Causeway Bay park to kick off the march despite the ban.”

In addition to hosting the Tiananmen vigil, Victoria Park has also traditionally been the starting point for the city’s annual July 1 march.

The preparations for July 1 also represent an initial challenge for newly appointed police chief Raymond Siu Chak-yee, who took up the post last week amid a major reshuffle.

The senior source said Siu would take the same approach as his predecessor, Chris Tang Ping-keung – who was promoted to secretary for security – in that both aimed to pre-emptively stop any disturbances from happening.

Thursday’s deployment will be the same size as the one mobilised in 2017 when President Xi Jinping and other state leaders came to Hong Kong to mark the 20th anniversary of the city’s return to Chinese sovereignty.

More than 3,000 officers would be stationed on Hong Kong Island on Thursday to guard against any eventuality in such areas as Causeway Bay, Wan Chai and the city government’s offices in Admiralty, the source said. 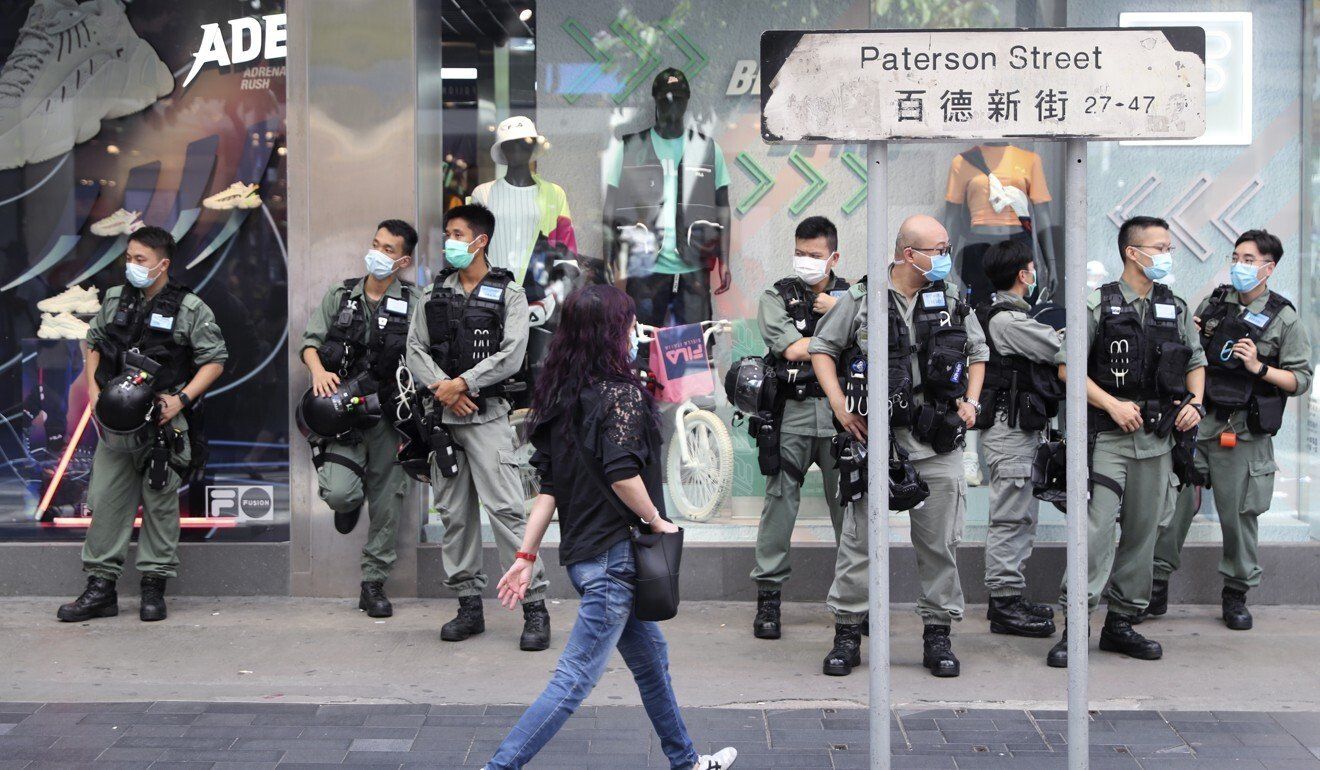 Causeway Bay is one of the neighbourhoods that will see a heightened police presence on Thursday.

Police would also provide security at the annual flag-raising ceremony at Golden Bauhinia Square in Wan Chai and the follow-up reception celebrating the handover anniversary, he added.

It is understood that more than 1,000 officers will be mobilised in the Kowloon West region, mainly in Mong Kok, while water cannons and armoured vehicles will be kept on standby.

Meanwhile, the three activist groups seeking to rally on Thursday – the League of Social Democrats, Tin Shui Wai Connection and Save Lantau Alliance – lost their appeal on Tuesday evening, a day after police cited the coronavirus pandemic as grounds for denying their march.

The Appeal Board on Public Meetings and Processions said it agreed with police’s assessment that the groups’ proposed infection-control measures – such as asking participants to socially distance and to use the contact-tracing app “Leave Home Safe” – would not work.

Police Superintendent Cheung Chi-wai said the force welcomed the ruling and warned the public against promoting the event or taking part in any illegal assemblies. “The force will adopt a zero-tolerance approach and will take resolute enforcement action.”

The groups’ application had been an attempt to resurrect the annual July 1 march traditionally organised by the Civil Human Rights Front, which previously revealed it would step away from the event for the first time since 2003 following the jailing of its convenor and launch of a police investigation into the legality of its existence.

Eddie Tse Sai-kit, a spokesman for the three groups, expressed disappointment with the ruling on Tuesday.

“The government has not done well enough to contain Covid-19 and now it is making use of it as an excuse to suppress our civil rights,” he said.

The groups said they would urge people to wear in black on July 1 to show their discontent with the political oppression.

Meanwhile, the Confederation of Trade Unions said it had plans to set up several street booths in Causeway Bay and Mong Kok on July 1 to call for the release of political prisoners and to fight against oppression.

The confederation’s chief executive, Mung Siu-tat, said it would observe social-distancing rules and would not advocate protests or marches.

“Holding activities on July 1 is a tradition for civil society,” he said. “We will mainly hand out leaflets to passers-by. I don’t think what we do would breach the national security law. We hope the police can respect people’s right to express their views and not harass us that day.”

Similarly, the League of Social Democrats said it also had plans to set up two to four street booths in Causeway Bay on July 1. 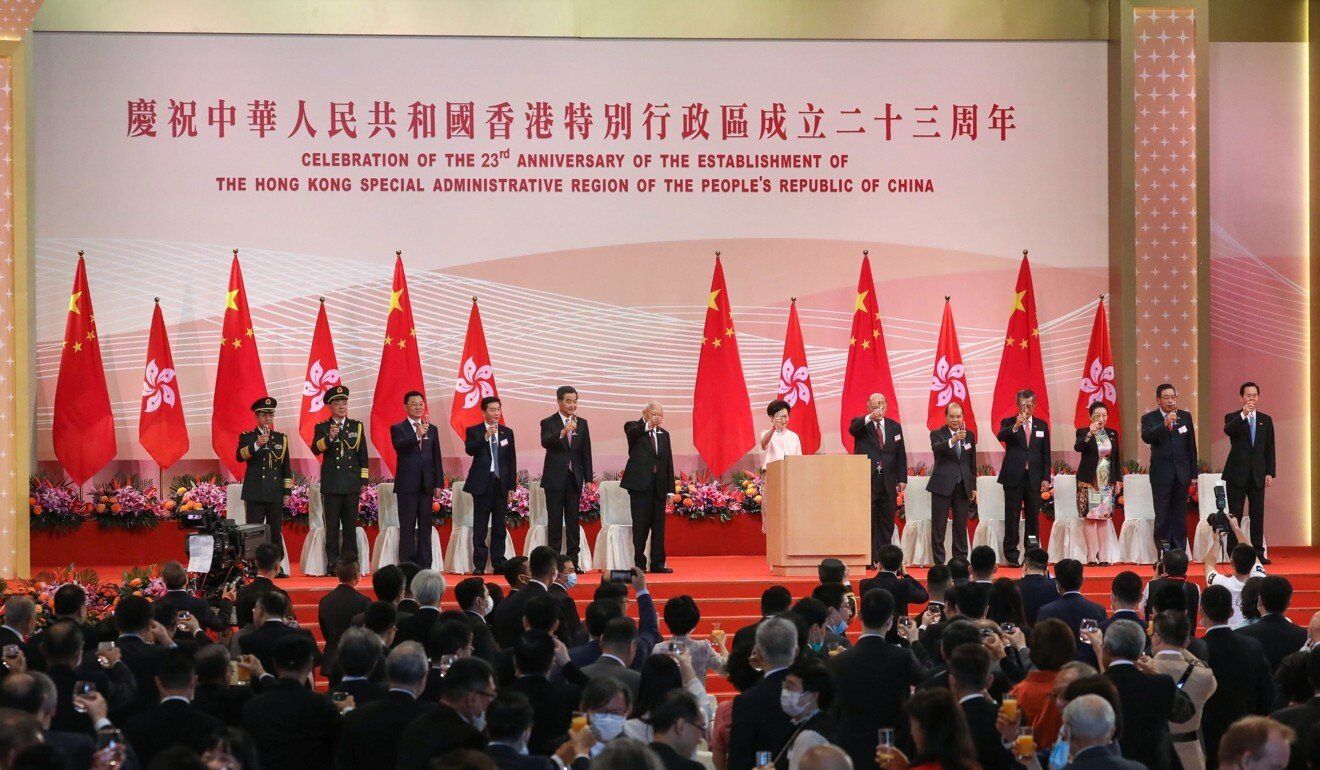 The senior police source, when asked whether the recent closure of Apple Daily might draw more people to the streets, said: “It’s hard to predict, but the paper still has massive support.”

The tabloid-style newspaper printed its final edition last Thursday following the arrest of multiple senior executives and the freezing of HK$18 million (US$2.3 million) in assets under the Beijing-imposed national security law.

Another source, meanwhile, said an enormous deployment was necessary because it would last from daybreak to late at night and would involve road closures around the Wan Chai ceremonies that would take place in the small hours of Thursday.

“We have to prepare for the worst, regardless of whether any intelligence has been received,” he added.

The sources said the force was still gathering intelligence and carrying out a risk assessment, and would finalise its deployment plan soon.