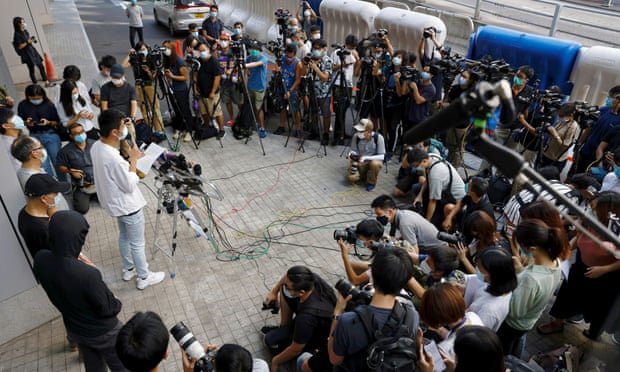 Experts say new policy enables government to decide who is a journalist and curbs power of student and online journalism
Hong Kong authorities have moved to further constrain the city’s free press with an announcement by police that they would no longer recognise certain types of media accreditation.

Critics accused the police force of infringing the constitutionally enshrined free press, by attempting to create a government licensing system and reduce independent monitoring of their activities.

Under the announcement the police force will recognise journalists from “internationally recognised and renowned” foreign outlets only or from media organisations that are registered with the government information system.

It explicitly stated it would no longer recognise the accreditations given by major associations such as the Hong Kong Journalists Association (HKJA) and Hong Kong Press Photographers Association (HKPPA), which represent hundreds of journalists.

The new policy would restrict those not recognised from attending press conferences, and would likely see less protection or assistance for individual journalists during protests and police-run operations.

The HKJA, HKPPA, and five media unions demanded the new policy be withdrawn, “or we will respond by taking any possible and necessary measures”.

“The amendment allows authorities to decide who are reporters, which fundamentally changes the existing system in Hong Kong,” they said. “It will be no different to an official accreditation system, which will seriously impede press freedom in Hong Kong, leading the city toward authoritarian rule.”

Freedom of the press has deteriorated sharply in Hong Kong over the past 18 months, particularly since the introduction of national security laws almost three months ago, and subsequent police raids on newsrooms. The semi-autonomous region has dropped 10 places in the Press Freedom Index since 2018.

In a letter sent to the Hong Kong Foreign Correspondents Club on Tuesday, a police chief superintendent, Kwok Ka-chuen, said the protests “often attract hundreds of reporters to a single hot spot”. He also repeated claims that “self-proclaimed reporters” had taken part in protests, and alleged they obstructed or assaulted police. “This has burdened the law enforcement action of police officers,” the letter said, but added that further training would be provided to officers to assist the media.

Kwok also claimed the new guidelines were based on discussions with media groups, a claim media associations rejected.

A letter from the media groups said existing guidelines were a product of detailed discussions between police and media, and that police had broken the relationship by announcing a “significant amendment” without consultation. The letter claimed the police chief, Chris Tsang, had repeatedly refused the HKJA’s requests for meetings.

Mak Yin Ting, a veteran journalist and a former chair of the HKJA, told the Guardian the new rules were a further step in tightening control on media. “It is absurd because by doing so the government, who should be monitored, is taking the power to decide who can be the monitor over them.”

Mak suggested there were two main aims: “One, to take the control of defining who is media from professional groups to a government department … The second purpose is to stop the numerous online media and journalists from university and journalism schools from publishing articles.”

Some of the most widely seen footage of incidents at protests, including the police shooting of a protester last year, and the tackling of a 12-year-old girl by officers just last month, were filmed by university media. In the case of the girl, police did not release a statement until after the footage had drawn considerable outrage.

Mak also expressed concern that police on the ground could decide which international media outlets were sufficiently renowned to be accepted, and said officers routinely had low awareness of media, even local titles. She rejected the claim that high numbers of reporters at events justified such rules.

On Wednesday a coalition of seven Hong Kong journalism schools expressed their “gravest reservations over the proposal” and called for the Hong Kong government to have it revoked.

“We are highly concerned that the practical implementation of this proposal is that it would strip the people of Hong Kong of a fundamental right,” the letter said. “The police have every right to take action against anyone engaging in illegal activities, however, this proposed policy is in effect restricting the freedom of reporting.”

Earlier Kwok defended the rules and said the criticism was based on a misunderstanding. However he confirmed that freelancers and student journalists would be barred from police press conferences and non-public events.
Add Comment