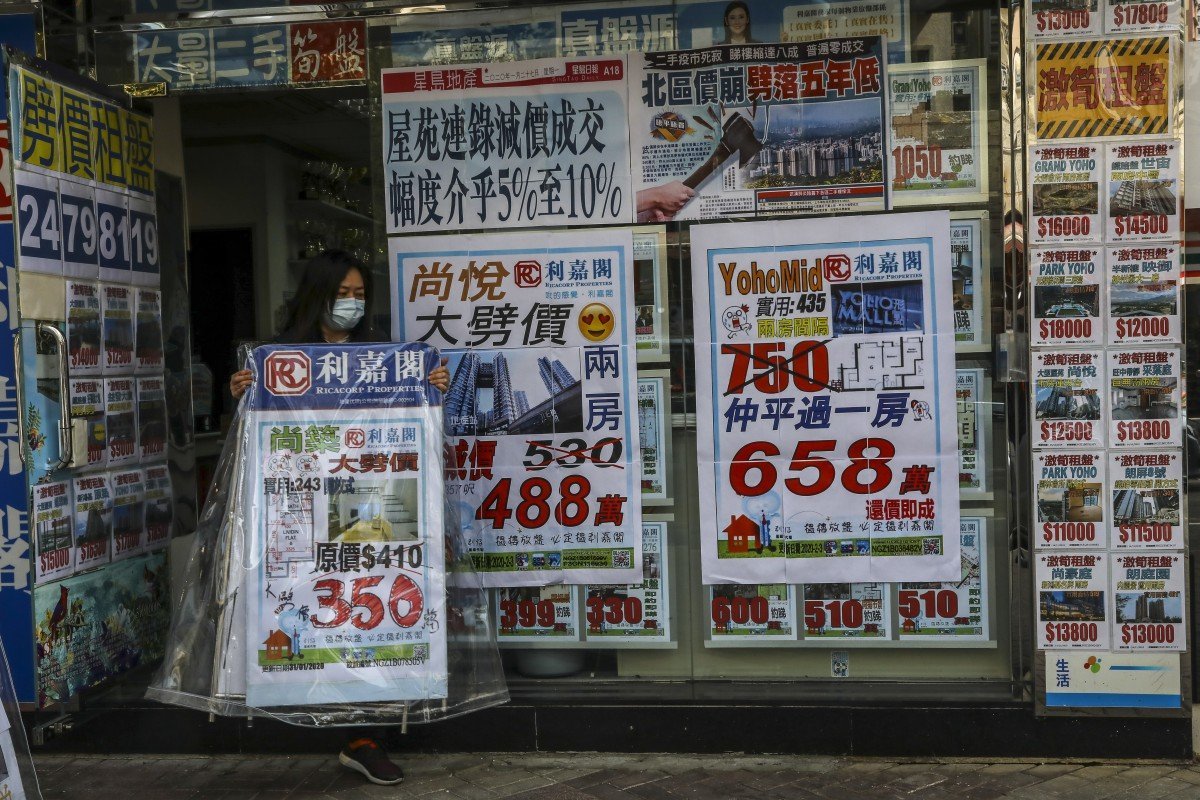 The price index for used homes in Hong Kong dipped 1.7 per cent to 378.5 in December, according to the Rating and Valuation Department. As many as 128 mortgage loans valued at HK$764 million (US$98 million) were in negative equity as at the end of December, more than double the number of cases three months earlier
Hong Kong’s commercial banks are cutting their valuations of mortgaged homes as they bow to the double whammy impact of a viral epidemic with months of anti-government protests, in a move that could drive even more borrowers into negative equity and provoke panic selling.

The weekly Centa Valuation Index (CVI) compiled by one of the biggest real estate agencies in the city plummeted by 3.52 points to 12.5 last week, the lowest level since January 2019. The lower the reading, the more bearish banks become of prospects in the real estate industry, and the more likely banks they are to cut their valuations of mortgaged property.

“The attitude of major banks towards home mortgages has cooled since the Lunar New Year in late January, as the coronavirus continued to spread,” said Centaline Property’s senior associate research director Wong Leung-sing. The CVI “will continue to drop in the coming weeks, and may even dip below 10,” he said.

The declining valuation could push borrowers further into negative equity, where the market value of a property is less than the outstanding amount of a mortgage secured on it. The potential indebtedness would drive mortgage borrowers into panic selling, creating a downward spiral that push prices lower.

The price index for used homes in Hong Kong dipped 1.7 per cent to 378.5 in December, according to the Rating and Valuation Department, the biggest monthly decline since last September’s 1.8 per cent drop when sentiments in the city were hit by anti-government protests.

As many as 128 mortgage loans valued at HK$764 million (US$98 million) were in negative equity as at the end of December, more than double the number of cases three months earlier, according to government data. Signs were already evident in the fourth quarter of 2018, when the valuations of 262 homes were pushed below their mortgage values, a situation that only improved somewhat last year when prices reversed their declines.

As Hong Kong’s economy finds itself in its first technical recession in a decade, the global coronavirus outbreak is keeping visitors away from the city and sapping the mood to consume. Property sales have stopped since mid January, as agents and potential buyers alike refrained from gathering in crowded places for fear of catching the virus.

The last time Hong Kong faced a similar housing crisis was in 2003 during the global outbreak of the severe acute respiratory syndrome (Sars), when 105,000 households – 30 per cent of the city’s total mortgages according to Fitch Ratings – were pushed into negative equity, a slump that took 14 years to recover from, requiring an almost sixfold jump in median home prices.

For now, none of the major mortgage lenders in Hong Kong would divulge negative equity cases among their customers.

HSBC, the city’s second-biggest mortgage lender in 2019, said it will continue to ensure that application assessment complies with its guidelines.

“Applications are considered on a case-by-case basis based on various factors, including applicant’s financial status, past record and ability to repay the loan,” the bank said in a statement. “We continued to accept new mortgage loan applications as usual.”

Hang Seng Bank, the third-biggest mortgage lender in the city of 2019, said its valuation and mortgage approval “is handled on a case-by-case basis based on the information provided by the customer and various factors,” while Bank of East Asia said it is being “prudent” amid the spread of the coronavirus.

“On average, banks have slashed 3 per cent of home valuation after the outbreak of the virus. If the sluggish environment cannot get better, banks my further cut evaluations,” said mReferral Mortgage Brokerage Services senior vice-president Eric Tso. “Lower valuation may eventually lead to more negative equity cases in the city.”

That would push borrowers to slash prices more to get out of their property holdings, agents said.

“Some owners, who may not be as liquid as others, are becoming nervous, and are keen to offer deeper discounts to get rid of their property before it turns into a negative asset,” said Derek Chan, head of research at Ricacorp Properties.
Add Comment