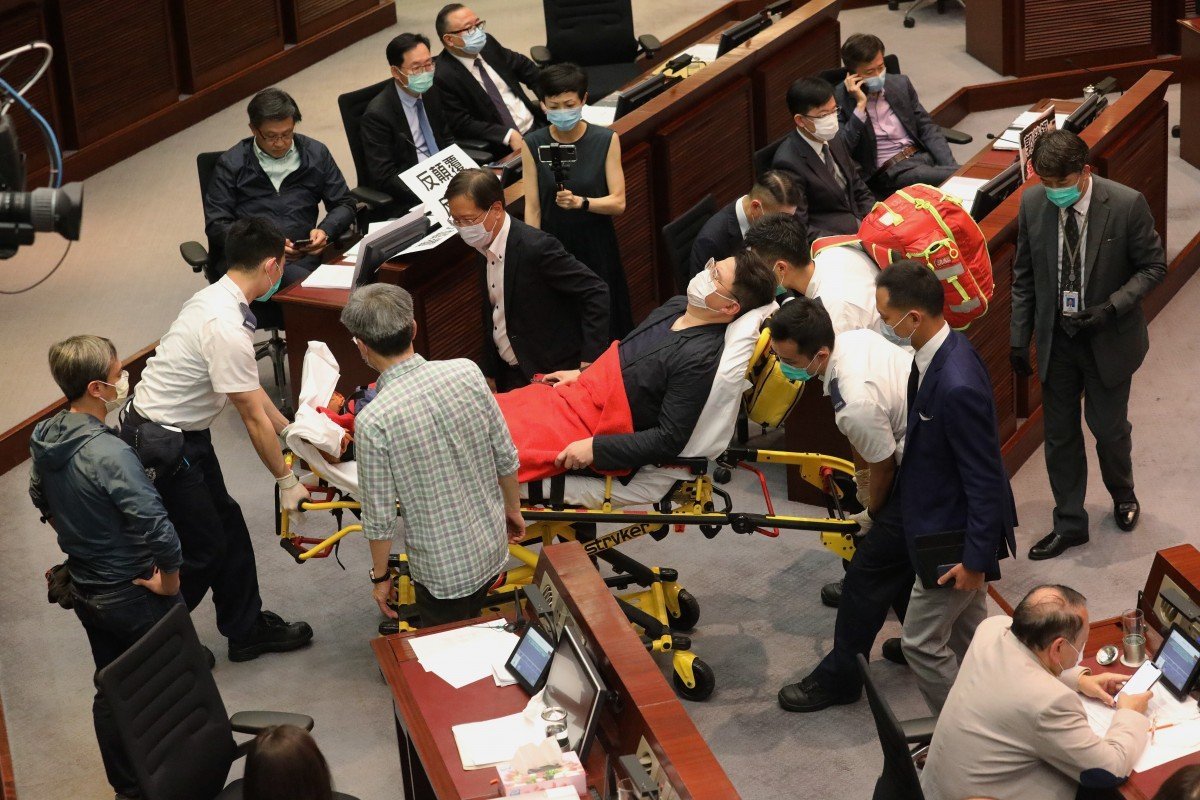 Arrests of eight opposition figures in connection with stormy Legco meeting may signal a shift in how once-tolerated antics will now cross a red line, they fear.

Hong Kong’s opposition lawmakers fear their days of aggressive and theatrical protest tactics in the Legislative Council may soon be over after this week’s arrests of several colleagues on contempt and interference charges.

They have often engaged in yelling slogans, waving banners, leaving their seats to encircle the Legco president’s podium, and scuffling with their rivals to protest against – and at times delay – bills in a legislature dominated by the pro-establishment camp.

But the arrests of eight opposition figures, including five sitting lawmakers, in connection with a stormy Legco meeting in May could signal a shift in how once-tolerated antics would now cross a red line, they said on Monday.

Democratic Party lawmaker Andrew Wan Siu-kin, one of those arrested, noted the diminished room for manoeuvre despite few changes in behaviour on their part.

“What we did that day was similar to what we have done in the past,” he said.

Others argued that the Legco (Powers and Privileges) Ordinance, under which the eight were charged, was supposed to protect all lawmakers. They accused the authorities of turning the law against those it was meant to defend.

Pro-establishment lawmaker Felix Chung Kwok-pan acknowledged that his camp was now inclined to take a firmer stance, including reporting incidents to police.

He accused the opposition camp of taking an increasingly aggressive approach.

“Only by doing so can we force them to return to their seats,” said Chung, a member of the Legco commission, which is responsible for the legislature’s security and administrative arrangements.

Police arrested the eight on Sunday and Monday in connection with a chaotic meeting on May 8.

The mayhem centred on a fight for control of the post of chairman of the powerful House Committee, which is responsible for scrutinising government bills before they are put to a vote in the legislature.

Dennis Kwok, of the opposition Civic Party, had been presiding over committee meetings for procedural reasons. But the pro-establishment side accused him of deliberately delaying the selection process in an attempt to block controversial laws such as the now-passed national anthem bill.

Eleven opposition lawmakers were thrown out of the May 8 meeting by pro-establishment leader Starry Lee Wai-king as she tried to seize control of the committee. She was later re-elected chairwoman of the committee.

Police arrested the eight on charges of contempt and interference with Legislative Council officers, under the Legco (Powers and Privileges) Ordinance, with both offences allowing for a maximum fine of HK$10,000 (US$1,290) and imprisonment of up to 12 months.

A spokesman for the Legco secretariat said between 2016 and this year, it had made eight reports to police, including four that involved injuries to staff. Pungent fluid being thrown in the Legco chamber triggered three reports while another was related to the alleged theft of votes from a ballot box. 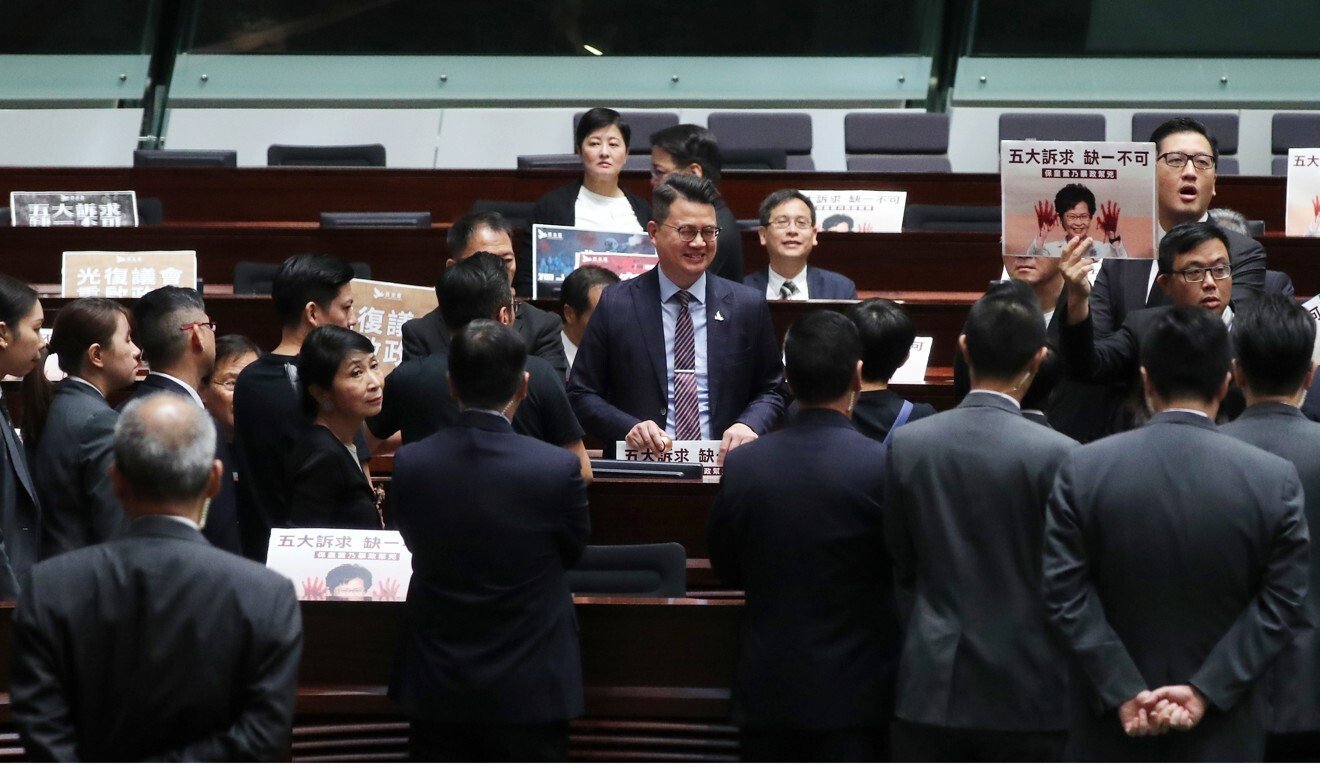 He said since 2018, members of the commission had decided they would seek police help when secretariat staff were injured while performing their duties.

While the ordinance was used in 2013 against three legislators’ assistants who manipulated lifts to hinder lawmakers’ attendance at a meeting, Civic Party leader Alvin Yeung Ngok-kiu said it had never been deployed to target Legco members until 2017, when prosecutors pressed a contempt charge against former legislator “Long Hair” Leung Kwok-hung.

In 2016, Leung snatched a document from then undersecretary for development Eric Ma Siu-cheung during a meeting, prompting the government to alert police. He became the first lawmaker to be charged under the ordinance and was accused of creating a disturbance at a Legco meeting.

Last year, police also charged seven pan-democratic lawmakers under the ordinance over another chaotic meeting that May.

Civic Party chairman Alan Leong Kah-kit, a veteran barrister, said the ordinance was supposed to be “the imperial sword” to protect Legco members. But it was being used by the executive, headed by city leader Carrie Lam Cheng Yuet-ngor, to attack lawmakers instead, he said.

Having experienced the legal action first-hand, Leung said the latest development showed how much greater was the suppression opposition legislators now faced. 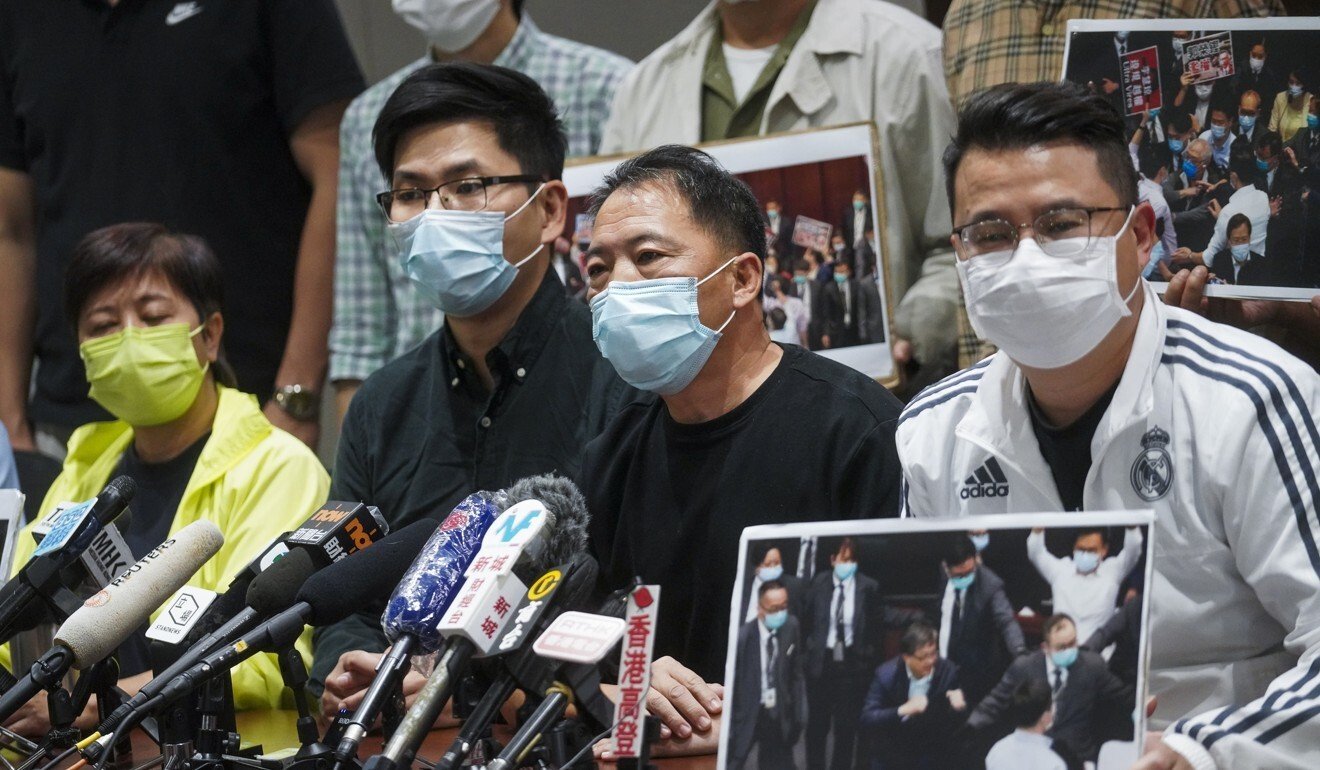 (From left) Helena Wong, Kwok Wing-kin, Wu Chi-wai and Andrew Wan were among those arrested.

He said in his case, the government was the party which alerted police. But in the present case, it was the Legislative Council which called police on its own initiative. He added the situation now amounted to one group of lawmakers using a law which was supposed to protect all Legco members to target another set of legislators.

“It just shows how ugly things have turned,” Leung said, expressing worries that it could become an increasingly common tactic to take aim at dissenters in the legislature.

He won his trial in a lower court, with the magistrate ruling that the law should not be applicable to lawmakers. But an appeal court overturned that decision
, finding that lawmakers who interrupted Legco meetings were not protected from criminal sanctions, as there were limits to the privileges and immunity they enjoyed. Leung has filed an appeal to the city’s top court.

The Legco spokesman said that based on the Court of Appeal’s ruling, legislators were not precluded from the offence of contempt under the ordinance.

But Yeung, of the Civic Party, raised concerns about a lack of clarity over the boundaries of what lawmakers could do, as final adjudication in the case was still pending.

“It seems like law enforcement and the prosecutors are taking advantage of this grace period,” he said.

Chung, from the pro-establishment camp, believed that taking a firmer stand could have a deterrent effect, stopping those in the opposition camp from resorting to aggressive strategies.

It could also send a message to future Legco members, as he noted that some candidates preferred a more radical approach these days.