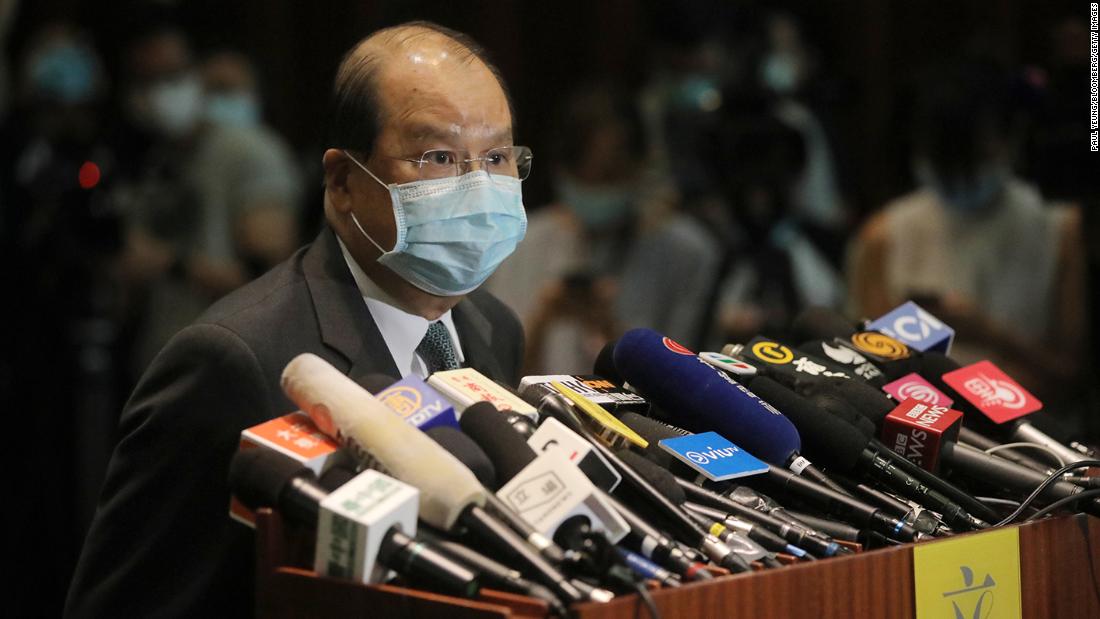 Chief Secretary Matthew Cheung told CNN that a controversial new national security law being drafted by the Chinese government will not erode Hong Kong's democratic freedoms.
Echoing senior Chinese government officials, Chief Secretary Matthew Cheung says only terrorists and separatists would be targeted by the law.
"99.99% of the Hong Kong population will not be affected, they'll go about their lives, they continue their investment in Hong Kong," Cheung said, in a rare exclusive interview with CNN.

Meanwhile, just blocks away, Hong Kong police used pepper spray and arrested more than 300 demonstrators who tried to protest against the new legislation that has drawn global criticism.

More than 200 parliamentarians and policymakers from two dozen countries signed an open letter last week slamming the anti-sedition bill as a "comprehensive assault on the city's autonomy, rule of law, and fundamental freedoms."

In the wide-ranging interview, Cheung sought to reassure investors, international business circles and foreign governments who have expressed varying degrees of concern that the national security law would breach Beijing's pledge to respect Hong Kong's autonomy until 2047.

But those assurances appeared to ring empty. When pressed about the law, it became clear that Cheung has little to no influence over the drafting of the legislation now underway in Beijing.

CNN asked if someone arrested under the law could be taken to mainland China for prosecution. "These are all details to be announced, everybody is waiting for it," Cheung answered.

Would strict censorship from mainland China trickle into Hong Kong society? "I doubt it," he said.

Could the law apply retroactively for prosecutions? "The drafting work hasn't started yet."

Could the law be used to bar candidates from running for legislative elections in November? "That's not the intention," Cheung replied.

The Chief Secretary spoke for 40 minutes in a conference room decorated with orchids on the 25th floor of the towering headquarters of the Hong Kong government. The compound had been fortified by rings of barricades and police checkpoints, to prevent demonstrators from trying to disrupt parliamentary debate of a proposed law to criminalize mocking the Chinese national anthem.

Cheung argues the national security law will bring stability to Hong Kong, by preventing a repeat of the increasingly violent street confrontations that rocked this city for months in 2019.

Cheung served for 25 years in the city's civil service under British rule, and has continued working as a civil servant nearly a quarter century after the former colony's handover to China in 1997.

The city has enjoyed special trading status with the US since then, thanks to the Hong Kong Relations Act of 1992. It allows Washington DC to treat Hong Kong differently from the rest of mainland China.

That unique status may be at risk. The Trump Administration and bipartisan groups of American law-makers have threatened sanctions if they perceive that Beijing tramples on Hong Kong's autonomy.

Hours after the interview concluded, US Secretary of State Mike Pompeo announced that he had certified to Congress that Hong Kong no longer enjoys a high degree of autonomy from China -- a decision that could result in the loss of Hong Kong's special status under US law.

"The State Department is required by the Hong Kong Policy Act to assess the autonomy of the territory from China. After careful study of developments over the reporting period, I certified to Congress today that Hong Kong does not continue to warrant treatment under United States laws in the same manner as US laws were applied to Hong Kong before July 1997," Pompeo said in a statement Wednesday.

"No reasonable person can assert today that Hong Kong maintains a high degree of autonomy from China, given facts on the ground."

Pompeo said the decision "gives (him) no pleasure," noting that "Hong Kong and its dynamic, enterprising, and free people have flourished for decades as a bastion of liberty."

"But sound policy making requires a recognition of reality," he said. "While the United States once hoped that free and prosperous Hong Kong would provide a model for authoritarian China, it is now clear that China is modeling Hong Kong after itself."

In his interview with CNN, Cheung said: "It's a double-edged sword. Any sanction will do nobody any good at all. Of course it will hurt Hong Kong, but it will doubly hurt the US."

He was referring to the sizeable trade surplus the US enjoys with Hong Kong. But the threat of downgraded relations with the US could further harm this city's reputation as a stable international trading hub.

The proposed national security law has been criticized by opposition lawmakers in Hong Kong, human rights groups and politicians worldwide.
"It is the end of 'one country, two systems,'" Dennis Kwok, a pro-democracy lawmaker, said last week referring to the principle by which Hong Kong has retained limited democracy and civil liberties since coming under Chinese control. "(They are) completely destroying Hong Kong."

As Hong Kong faces further headwinds, including talk of a new Cold War between the US and China, Cheung tried to end the conversation on a positive note.

"My parting words - Hong Kong may not have the trappings, the semblance of a full-fledged Western democracy - but we do enjoy the root substance of freedom in the world which is not commonly found in many, many democracies elsewhere."
Add Comment