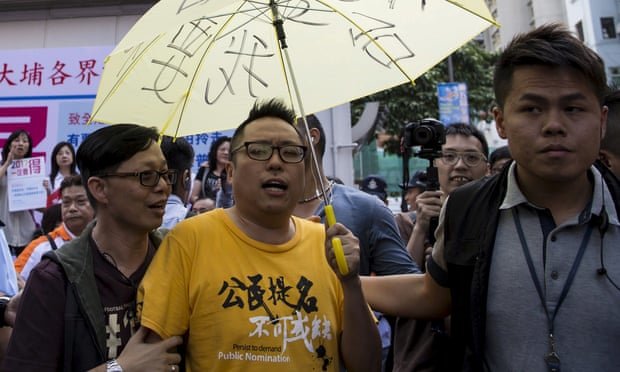 It came as a senior Chinese official called for “judicial reform” in Hong Kong and three pro-democracy legislators were arrested.

Activist Tam Tak-chi is facing more than a dozen charges, including for “uttering seditious phrases” and advocating for an independent Hong Kong. He has been charged with sedition under colonial-era crimes laws, but on Tuesday the department of justice told the district court’s chief judge that Tam’s case may involve national security matters and thus should be overseen by a specialist judge, RTHK reported.

It also suggested that a national security judge must be appointed to decide on their request, a suggestion the chief judge, Justin Ko, rejected.

The sweeping national security law enacted in June allows for specialist judges appointed by the chief executive to hear cases, and has blurred the avenues of appeal for such cases in Hong Kong. The department said having a normal judge preside over the case could have implications for any potential judicial review.

Ko ordered both parties to make submissions by the end of the week. The department of justice has been contacted for comment.

There is growing alarm at apparent interference in Hong Kong’s judiciary, particularly since the imposition of the law, and over claims by senior leaders that Hong Kong has no separation of powers.

On Tuesday, deputy director of the Hong Kong and Macao Affairs Office, Zhang Xiaoming, called for Beijing to assert more control over the semi-autonomous region, telling a legal summit that the work was underway on “reforms” related to the judiciary, “oath optimisation” and “qualification screening” for civil servants, and national education.

“We need to see [Hong Kong’s mini constitution] the basic law as something that is alive so we can interpret the basic law whenever necessary,” said the senior Chinese official, who also hailed the removal of four pro-democracy legislators last week.

The group was expelled immediately after a decree by Beijing reinterpreted the basic law to allow for the disqualification of “unpatriotic” legislators. The expulsion prompted the mass resignation of the pro-democracy caucus in protest at the continuing crackdown on opposition.

On Wednesday, police again arrested three of those legislators, in relation to incidents during televised legislative debates in May and June. The former lawmakers Ted Hui, Ray Chan and Chu Hoi-dick confirmed the arrests on their Facebook pages.

Footage showed Chu and Chan rushing to the front of the chamber during a June debate and splashing a foul-smelling fluid as guards grappled with them. Police and firefighters arrived later. Footage in May showed Hui dropping a rotten plant in the middle of the meeting.

Police said that after an in-depth investigation, the three men had been charged with attempting to use harmful substances with the intent to cause harm, mental injury or irritation to others. They have been detained while the investigation continues.

Earlier this month a private prosecution by Chan against a pro-Beijing legislator Kwok Wai-Keung for alleged assault was quashed after the department of justice intervened. Footage widely shared online showed Kwok dragging Chan to the ground during a May meeting which descended into violence. The department of justice said Kwok’s actions were lawful and reasonable “under the circumstances”.

Seven pro-democracy legislators, including Chu and Chan, have already been charged over their involvement in events on the day.
#Facebook
Add Comment