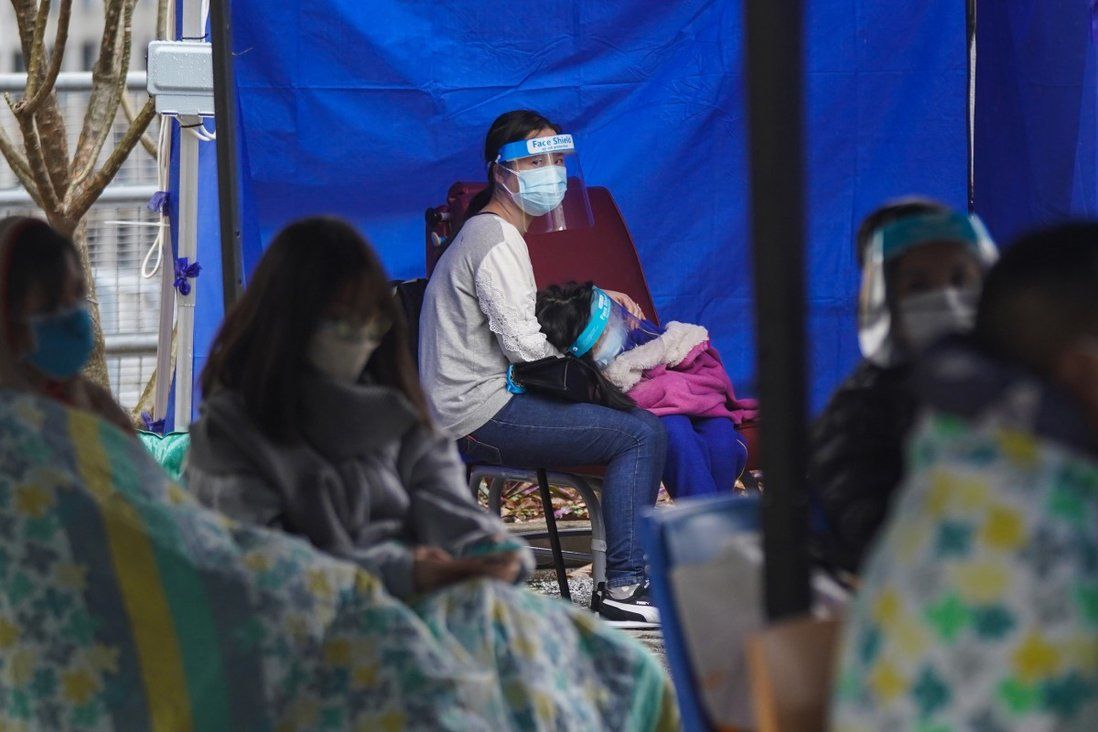 Housewife Wong Chui-mei ‘felt so helpless’ as she, her husband and their three children waited in a tent on hospital grounds to get medical help.

When Hongkonger Wong Chui-mei recounts her Sunday night with her family in the cold under a makeshift tent on hospital grounds, she calls it the “worst experience” of her life.

The 34-year-old housewife, her three children and her husband were forced to brave the cold outdoors at the Caritas Medical Centre for an entire night, while her two sons suffered from high fevers and she had a sore throat.

The family went to the hospital on February 13 after all of them, except the husband, a 36-year-old construction worker, tested positive for Covid-19 on rapid test kits at home.

“I cried and felt so helpless. But no one came to help, and no medical staff could be found,” she said.

Wong and her children are just one family among many struggling to get help as the city reported a record of more than 6,100 confirmed coronavirus cases and about 6,300 suspected infections on Thursday.

Public hospitals have been swamped with Covid-19 patients, and some, like the Wong family, have been told to wait outdoors for hours or even days before being admitted because of a severe shortage of beds.

But falling temperatures and the occasional drizzle have made things even worse. On Thursday, the Hong Kong Observatory recorded a temperature of 15 to 17 degrees Celsius (59 to 62.6 degrees Fahrenheit), adding it expected the mercury to plunge as low as 10 degrees over the weekend.

More than a dozen patients were seen lying on hospital beds outside the building at Kwong Wah Hospital in Mong Kok on the same day, with similar scenes occurring at Caritas Medical Centre in Sham Shui Po.

After finding out their rapid test results, Wong called the ambulance on Sunday night. Despite the couple being fully vaccinated, their three children had not yet received any jabs.

Her two sons, aged seven and four, had fevers of higher than 39 degrees that night, with the youngest vomiting several times. Wong herself suffered from a sore throat and coughed severely, while her nine-year-old daughter had milder symptoms.

The ambulance took the family from their subdivided flat in Sham Shui Po to the hospital at about 9pm, but they waited two hours in the vehicle before being allowed inside.

The family were led to an outdoor area with dozens of makeshift tents occupied by a total of 20 to 30 patients, most of whom were elderly. Told by a medical worker to wait in one of the tents, the Wong found nothing inside but a few foldable chairs.

Despite feeling tired and the pain in her throat, Wong stayed up and held her youngest son, trying to calm the crying child and help him sleep, while her oldest son slept against her leg for comfort. Her husband and daughter barely rested at all.

The plunging temperatures at night and rain showers in the early morning only made things worse. Wong said she had lost her voice.

“My throat was so painful and I coughed up blood, while I was so worried about my children,” the mother said.

No help came until about 3am, when some medical staff tested them and handed them antipyretics. She complained about the bad attitude of the staff, who refused to answer any questions and told them to continue waiting.

The family of five were all notified that they were positive for the coronavirus at around 4pm on Monday. The hospital asked her husband and their older son and daughter to go home as they all had mild symptoms.

Meanwhile, Wong and their four-year-old were only allowed indoors at 11pm, where they continued to wait until they were finally admitted to North Lantau Hospital at about 4pm on February 15. Both are recovering.

“This was the worst experience I have ever had so far in my life,” Wong said. “How could this happen in a prosperous city like Hong Kong?”

The Hospital Authority’s chief manager Dr Sara Ho Yuen-ha said on Thursday that the group was exploring different ways to admit patients as soon as possible, such as mobilising indoor areas such as conference rooms to reduce the number of people waiting outside.

“Health care workers are very unhappy about this situation and worry about the condition of our patients, especially because it’s raining today and the weather will be getting colder in the next few days,” she said.

The surging cases have also forced health authorities to relax the criteria for discharging patients to relieve pressure on hospitals.

Patients can now leave community isolation facilities if they test negative seven days after their positive diagnosis, down from the previous requirement of 14 days.