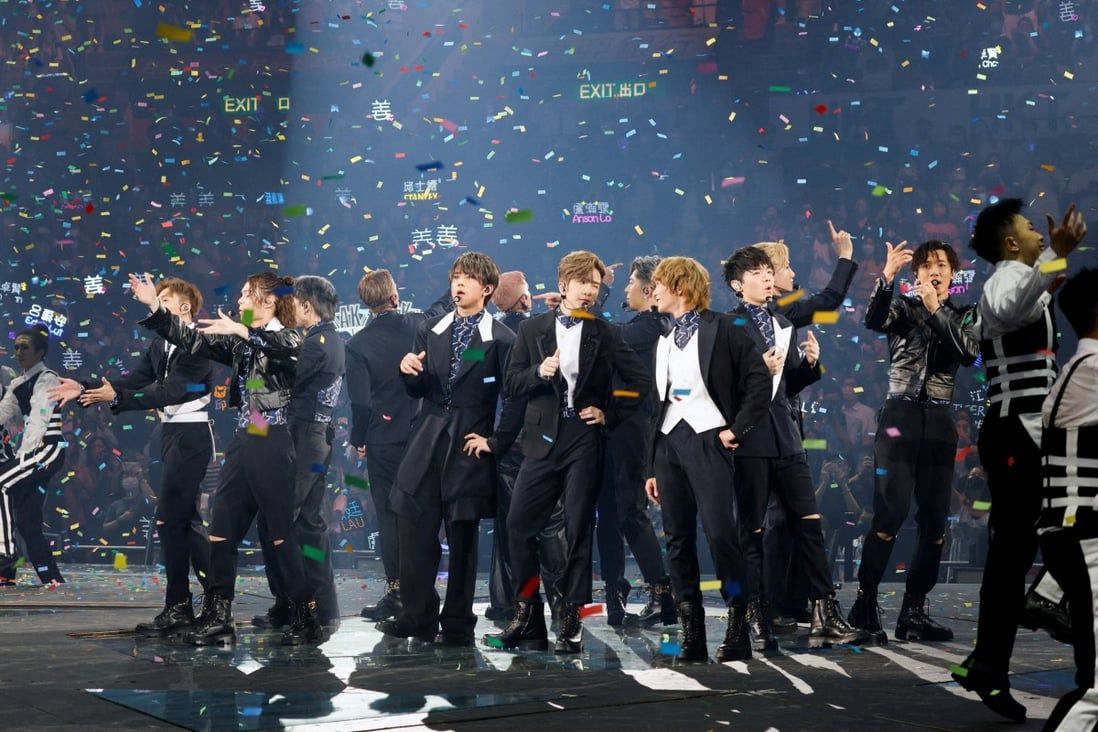 Investigation report raises questions about whether more registered professionals who inspected the installations should be held liable.

The organisers of a concert by popular boy band Mirror refused to disclose further information on stage equipment to a government investigation at one point in the inquiry, the Post has learned, as officials overseeing the venue are set to be grilled in the legislature on Monday.

The information MakerVille and Music Nation declined to provide to the government’s investigative task force included mill certificates – a quality assurance document confirming the chemical and mechanical properties of a product by a manufacturer – a source familiar with the matter told the Post on Saturday, a day after a report on the incident was released.

But the insider said the organisers faced no consequences at that time, as the government task force was largely occupied with other technical aspects surrounding the accident that seriously injured a dancer.

The findings of an investigation led by the Cultural, Sports and Tourism Bureau – released three months after the July 28 accident – revealed misreporting of equipment weight, the use of a substandard cable and poor installation were the main causes. 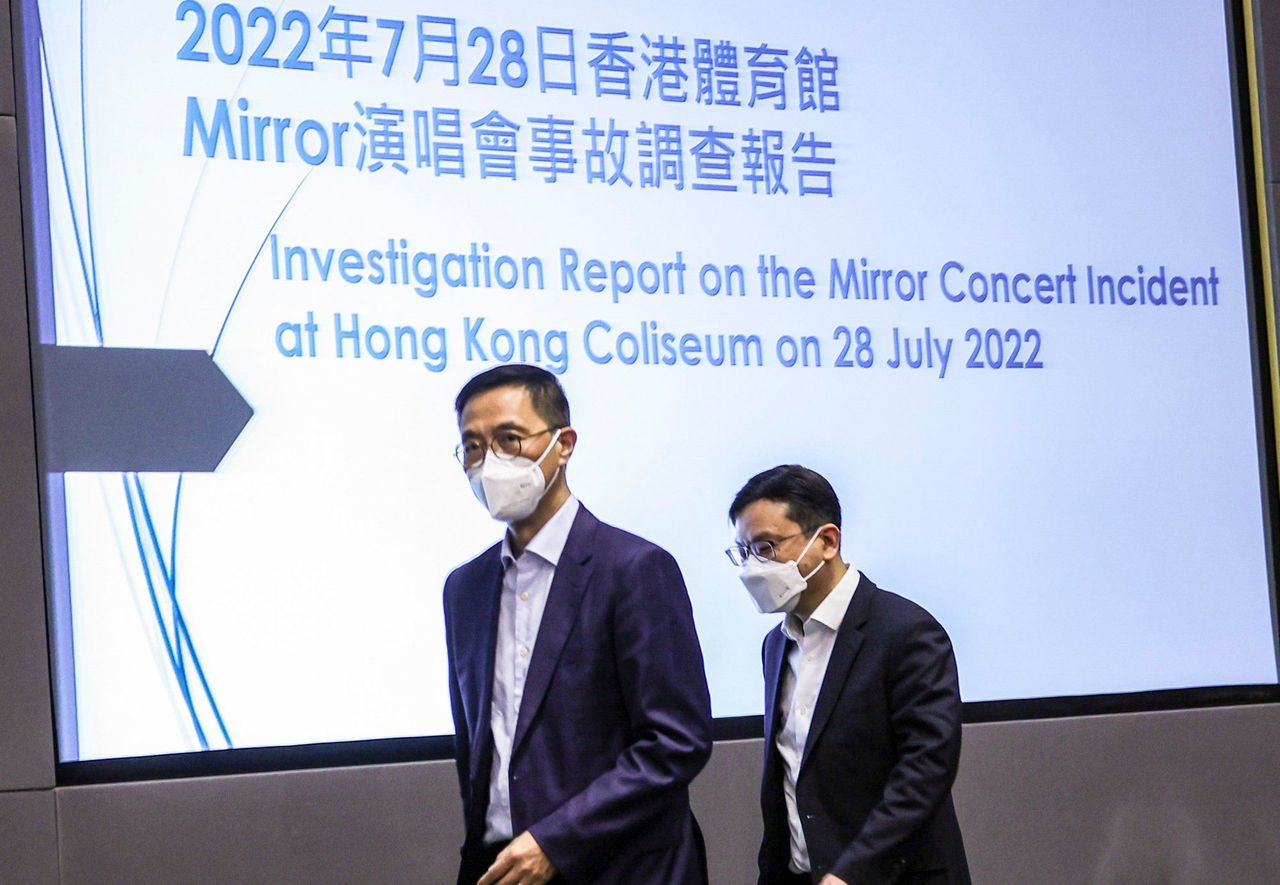 Kevin Yeung (left), secretary for culture, sports and tourism, and Chris Sun, secretary for labour and welfare, attend a press conference on the investigation report on an incident at a Mirror concert.
All five suspects, who included workers for the main contractor and subcontractor production companies, arrested in connection with the incident were granted bail on Saturday. They were arrested on suspicion of fraud and allowing objects to fall.

While police said they did not rule out more arrests, details of the task force’s full report raised questions on whether more registered professionals who inspected the installations should be held liable for the incident.

Representatives from the Leisure and Cultural Services Department and the Cultural, Sports and Tourism Bureau were expected to take questions on unresolved issues arising from the report on Monday.

The investigation task force noted that the hirers of the Hong Kong Coliseum had engaged engineering firm United Technical Services to produce an inspection report as an authorised person for the department’s approval.

In the investigation report, the firm United Technical Services was described as a company hired by Engineering Impact to “inspect the site and [issue] an inspection report to confirm that the installations were in good working condition”.

The inspection report produced was then checked and approved by the department before the concert could proceed.

According to a source familiar with the matter, the structural engineer from the firm was responsible for checking the design of the stage and other equipment used for safety, as well as conducting a site visit to examine if the actual stage set-up matched with that laid out in the blueprint.

However, whether the engineering firm had any legal responsibility over the accident was not mentioned on Friday. The identity of the engineer was not revealed in the document.

While cultural minister Kevin Yeung Yun-hung had accused professionals, including the authorised person, of failing to make sure the fixtures were secure on Friday, he did not comment on United Technical Services.

Barrister Albert Luk Wai-hung said the current case had been built on the premise that the contractors have provided misleading information. “The Leisure and Cultural Services Department and the authorised person were misled,” he said.

While the authorised person has a duty to sign off on the project to ensure its safety, they are not expected to weigh the items to be installed, the barrister added. 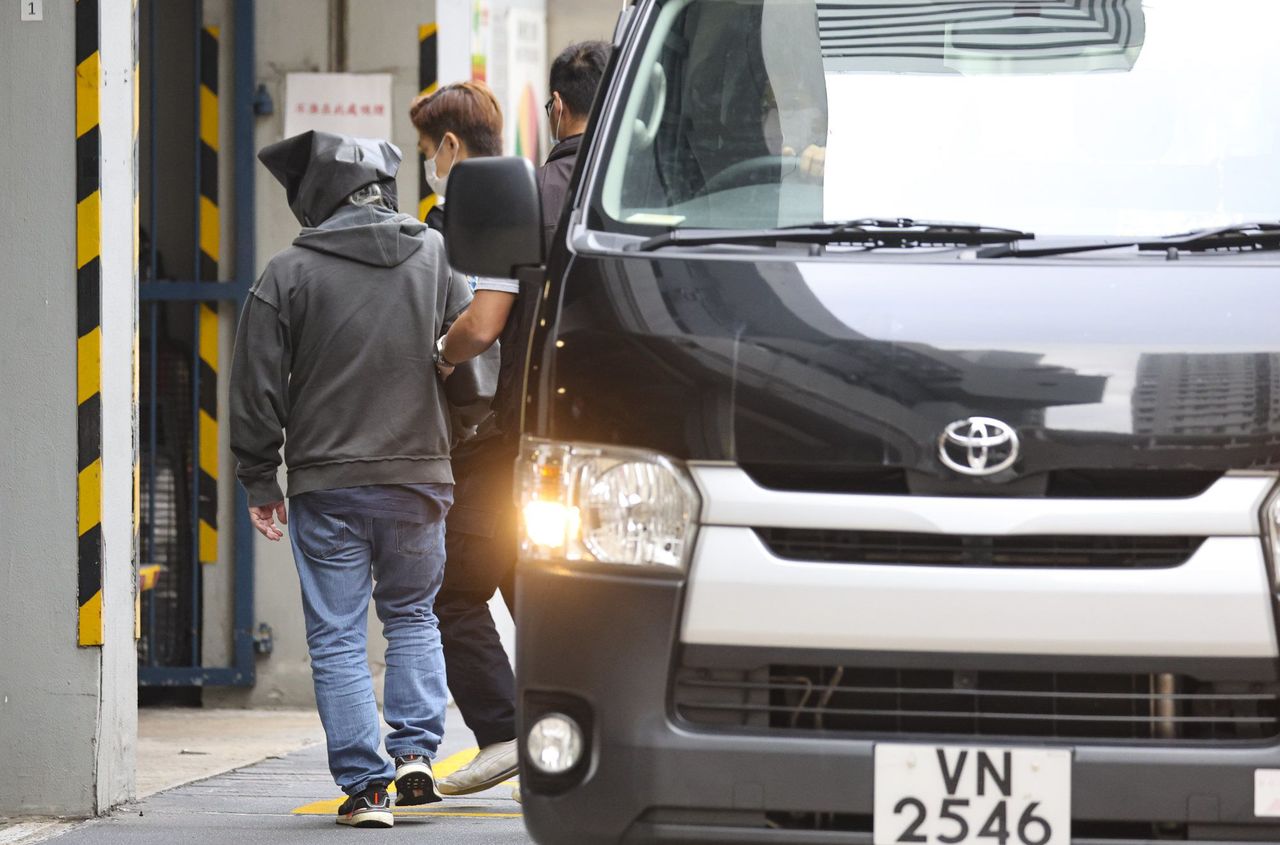 Police officers arrest a suspect over the Mirror concert incident.

Solicitor Kenneth Ng Hung-sui, who specialises in construction-related regulatory compliance matters, said whether the authorised person could be held liable in the case of an accident would depend on the terms of engagement set out in their contract with the hirer, if the authorised person had declared parameters and limitations to their work, as well as whether there had been any professional negligence.

“If he has declared that he would not be responsible for verifying the data given, then any wrongful data would have nothing to do with the authorised person’s responsibility,” Ng said.

He added that the duties of the authorised person would fall under the specific contractual arrangements with the hirer of the venue since the concert’s stage set-up did not fall under the scope of the Buildings Department’s regulations.

“Since the stage set-up was indoors and did not affect the venue’s structure, it did not seem to be the main target of the kind of works regulated under the Buildings Department. Hence such works would not require prior approval and consent,” Ng said. 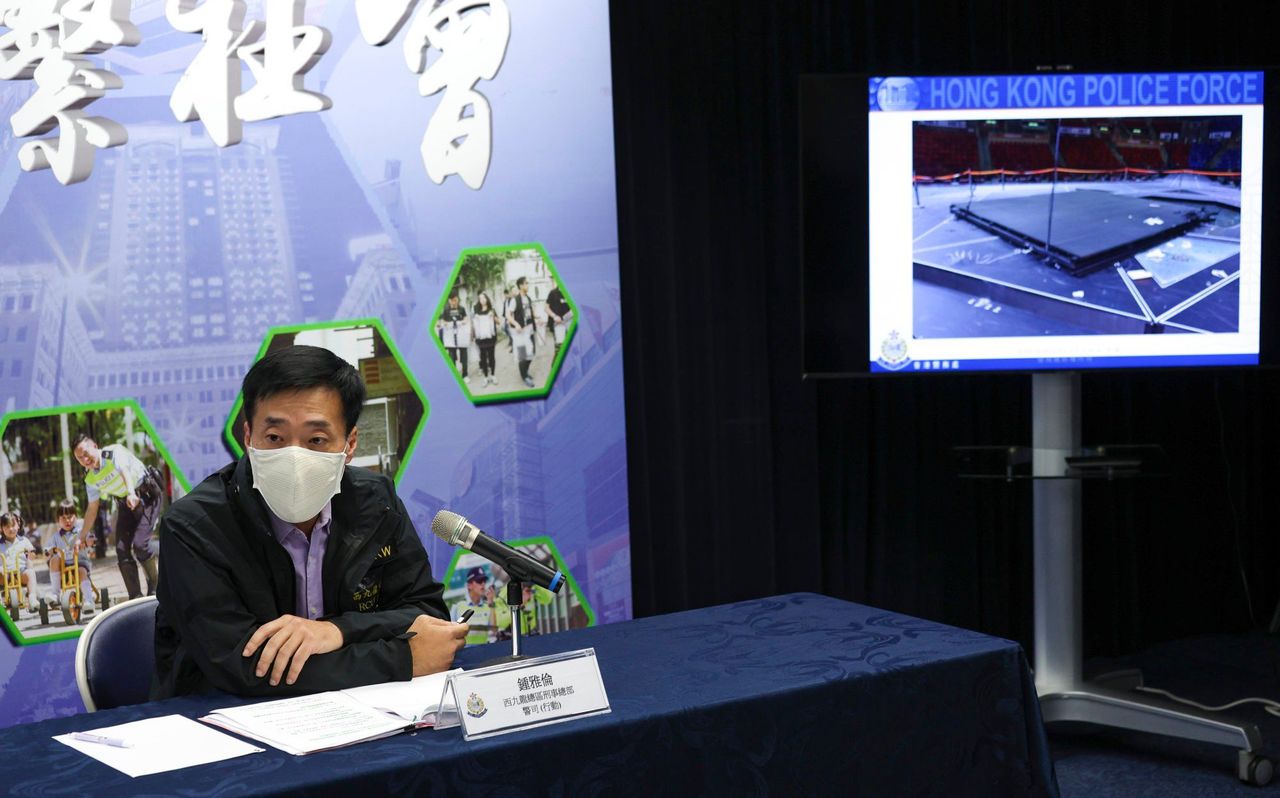 Police Superintendent Alan Chung of the Kowloon West regional crime unit attends a press conference on the falling screen incident during a Mirror concert in July.

Reverend Derek Li Shing-lam, father of severely injured dancer Mo Lee Kai-yin, commented on the report on Saturday night, saying that the investigation “did justice” and unearthed more truth for all affected.

He added that he and his wife were relieved that his 27-year-old son, who is still in danger of being paralysed from the neck down, could gradually adapt to swallowing food.

Mirror members on Saturday spoke out against the alleged false reporting by Engineering Impact, the principal contractor of the concert.

“The data was totally wrong and falsely reported … When the report was out, we were all shocked by the big discrepancies in the declared weights [of the stage installations],” Mirror member Anson Kong Ip-sang said.

He expressed hope that Hong Kong could provide more protection for stage performers.

“Different regions have put in place mechanisms to protect the safety of performers … I believe the mechanism in Hong Kong at present is still not fully developed. I hope following this incident there will be greater safeguards for performers,” he said. 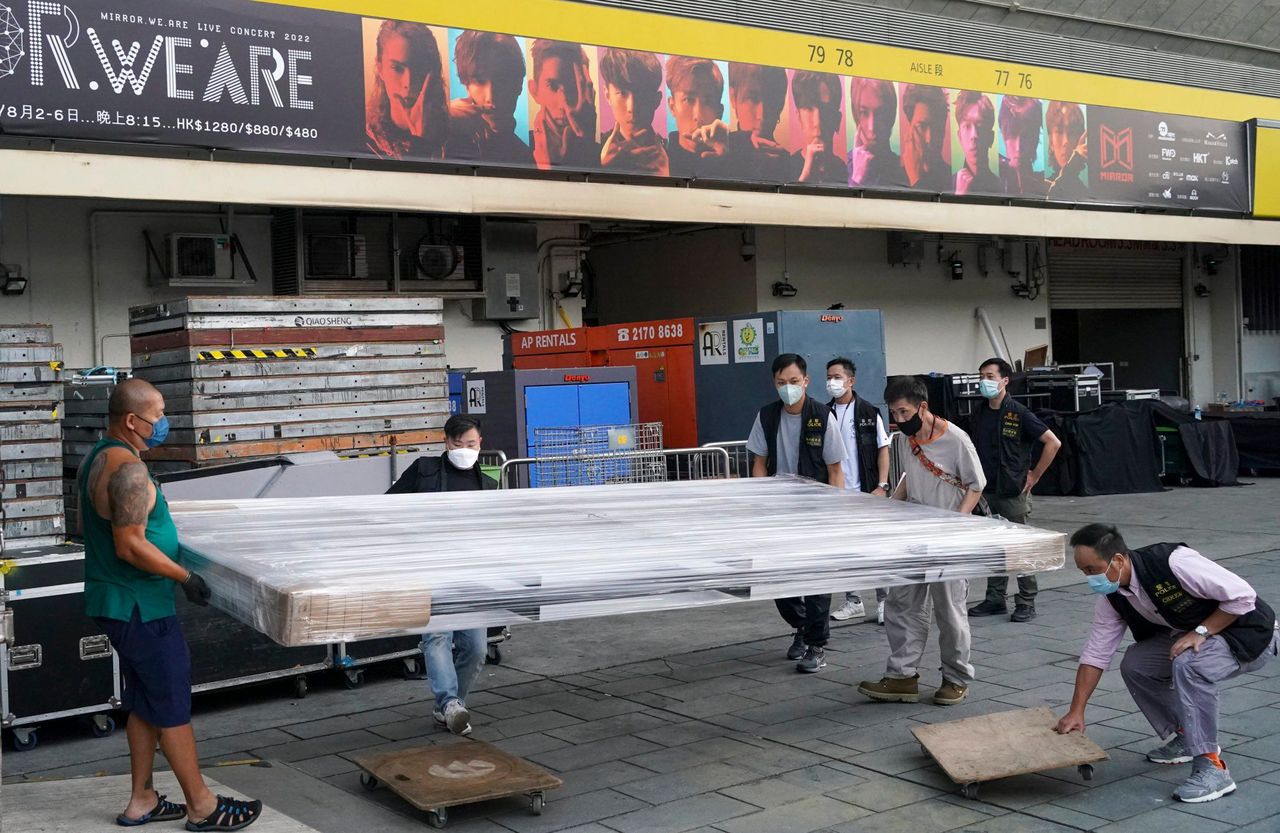 Police officers collect evidence, including giant screens, the supporting frames and a broken screw, from the scene of the accident at the Mirror concert.

Another group member Anson Lo said from now on he would pay close attention to stage safety and better communicate with dancers and the organiser.

Superintendent Alan Chung of the Kowloon West regional crime unit on Friday accused Engineering Impact of falsely reporting the weight of the stage set-up to mislead the Leisure and Cultural Services Department to hasten an approval process for the show.

Engineering Impact under-reported the weight of six LED screens in the stadium, which totalled 4,468kg (9,852lbs), by 63 per cent at 1,632kg. A structure installed with lighting devices weighed 2,331kg in total, about 4.8 times more than the declared weight of 489kg.

Dancers who performed in the concert series also took to social media to vent their anger hours after the report was released.

Chang Tsz-fung, 29, an injured dancer who has to do daily physiotherapy after the screen hit his head and crushed his pelvis and thighs, questioned on Instagram how the contractor was able to report the speakers weight at 726kg, when they in fact weighed 5,551kg, more than seven times what was claimed.

“With so much data about the stage set-up, how did the Hong Kong Coliseum, which has done so many concerts in the past, approve this application without finding the weight discrepancies?” he wrote.

Mirror concert dancer Fong Tsz-yan, one of the 23 artists who signed a petition in July appealing to the public not to blame the performers for the incident, also fired a barrage of questions on Instagram, asking why Engineering Impact was not banned from operation when it was accused of deliberately under-reporting the weight of the stage equipment.

“Why have the authorities still not halted the operation of this company when they now discover that it has seriously under-reported the data? … Why is the firm still allowed to take jobs? Where is the deterrent effect?” she asked.

“Why did the government accept everything claimed by this company without performing its supervisory role to vet the application?”

Minister Yeung said the government would look into whether an independent third party was needed to check engineering work and installations for events as a part of recommendations in light of the accident, while dismissing any suggestion that the department had failed to do its job.