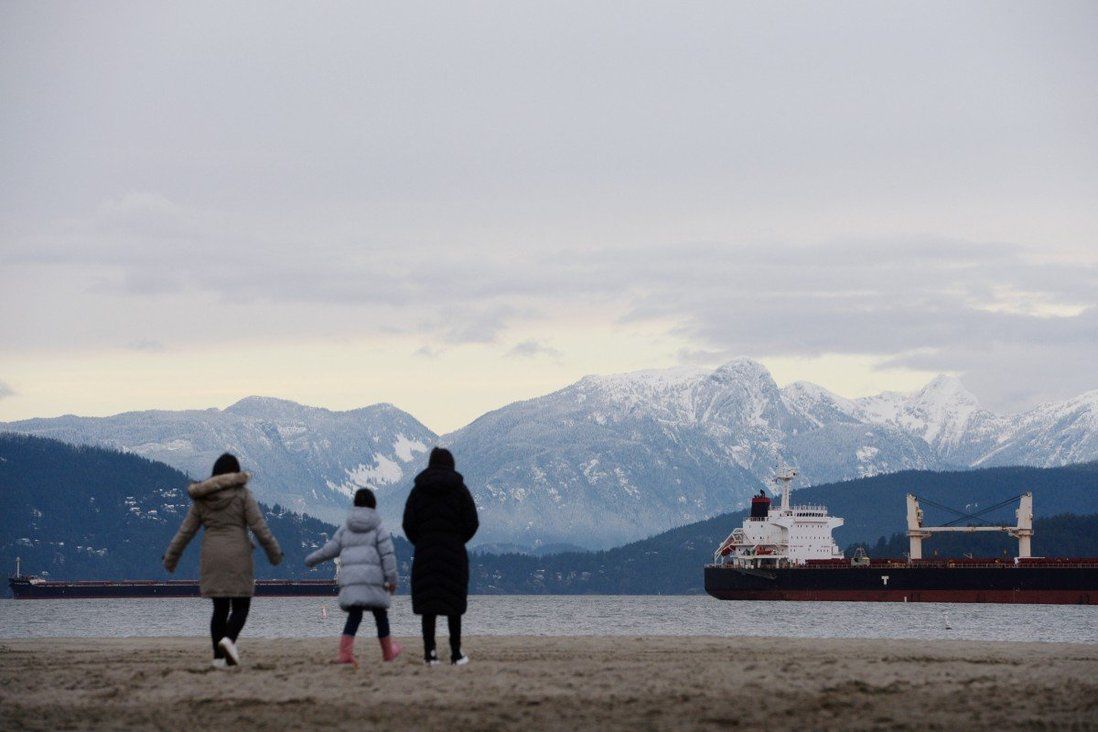 Hong Kong migration to Canada soars to levels unseen since 1998

More than 22,500 Hongkongers received Canadian permanent residency, work or study permits in 2021, up 256 per cent from 2019. About a third received open work permits created in the wake of the national security law.

Migration from Hong Kong to Canada has soared to levels not seen since 1998, the year after the city’s handover to China, according to new data.

The exodus from the territory comes after Ottawa set up new exit routes for young Hongkongers in response to the crackdown on anti-government protests in 2019 and Beijing’s imposition of a national security law in 2020.

But the flow of Hongkongers to Canada has cascaded through other immigration and visa categories too, the data shows.

Large numbers of Hongkongers have been leaving since the introduction of the national security law against secession, subversion of state power, terrorism and foreign interference. Critics say the law has suppressed dissent and eroded freedom in the city. 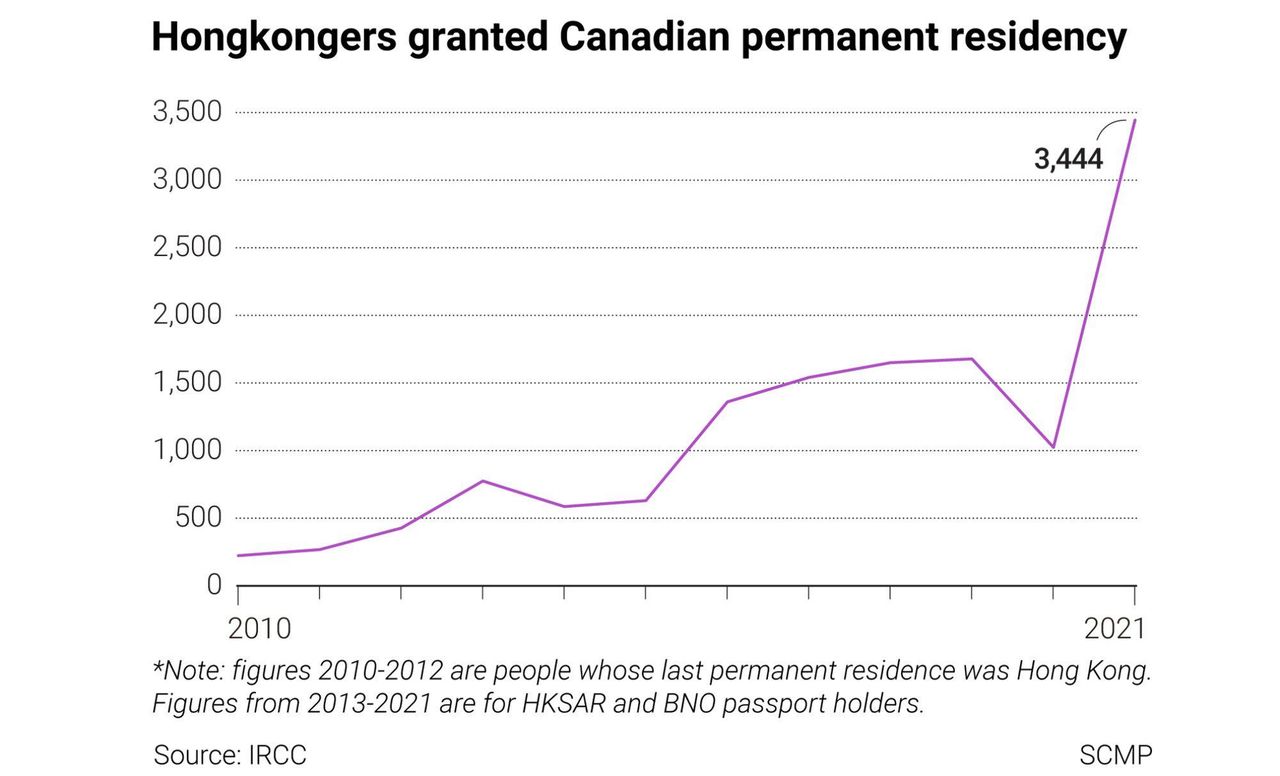 Canada became a popular destination for Hongkongers before the handover, and the new data depicts another surge across the Pacific.

Figures provided by Immigration Refugees and Citizenship Canada (IRCC) show that 3,444 Hongkongers were granted Canadian permanent residency in 2021, more than double the number in pre-pandemic 2019, and 15 times that of 2010. It is 24 years since levels were so high.

That number, however, was dwarfed by those granted study and work permits, which do not immediately confer permanent residency but offer pathways to that status and citizenship thereafter.

They include thousands of three-year open work permits that the Canadian government created in February 2021 for Hongkongers graduating from post-secondary studies within the five years preceding their applications. 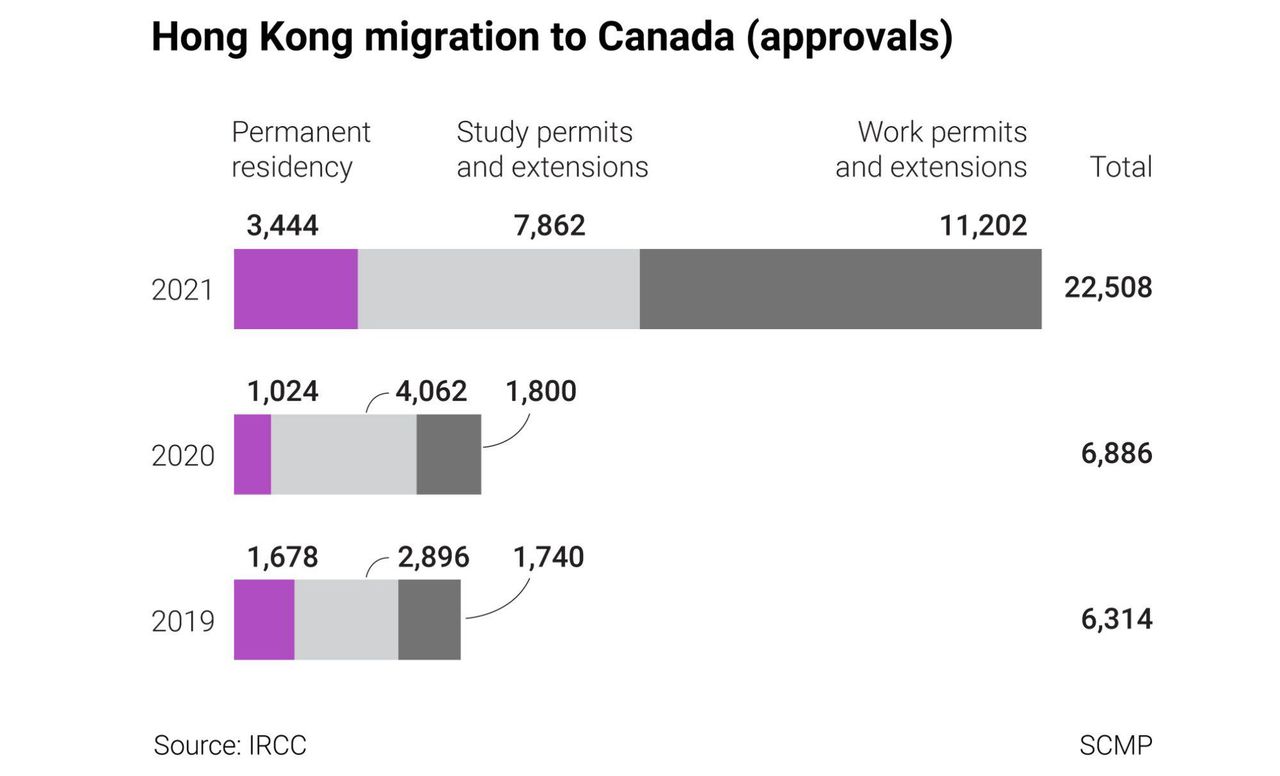 Last year, 19,064 Hongkongers were granted Canadian study or work permits, including extensions, more than four times the number granted in 2019. They include 7,952 on the new work permit for Hongkongers.

Hong Kong-based immigration lawyer Jean-Francois Harvey said the Hong Kong-specific schemes set up by Ottawa had created a “domino effect” on “every other aspect of movement” to Canada.

“More Hongkongers who qualify under these [specific programmes] go to Canada, but they then encourage their friends and relatives to go too,” said Harvey, founder and managing partner of the Harvey Law Group. “Our Vancouver office, for example, has been receiving lots of calls from Hong Kong people who are already in Canada, asking how can they bring their cousins, their friends.”

Rising numbers of Hongkongers are heading for Canada via routes large and small.

For example, 235 Hongkongers were admitted to Canada as temporary foreign workers (under a distinct category of work permit) in 2021, up from 90 in 2019. A further 45 received work permits on humanitarian grounds last year, compared to 15 in 2019.

Harvey said it was not just Hong Kong graduates heading for Canada, but a growing numbers of tradespeople such as carpenters, plumbers and electricians. 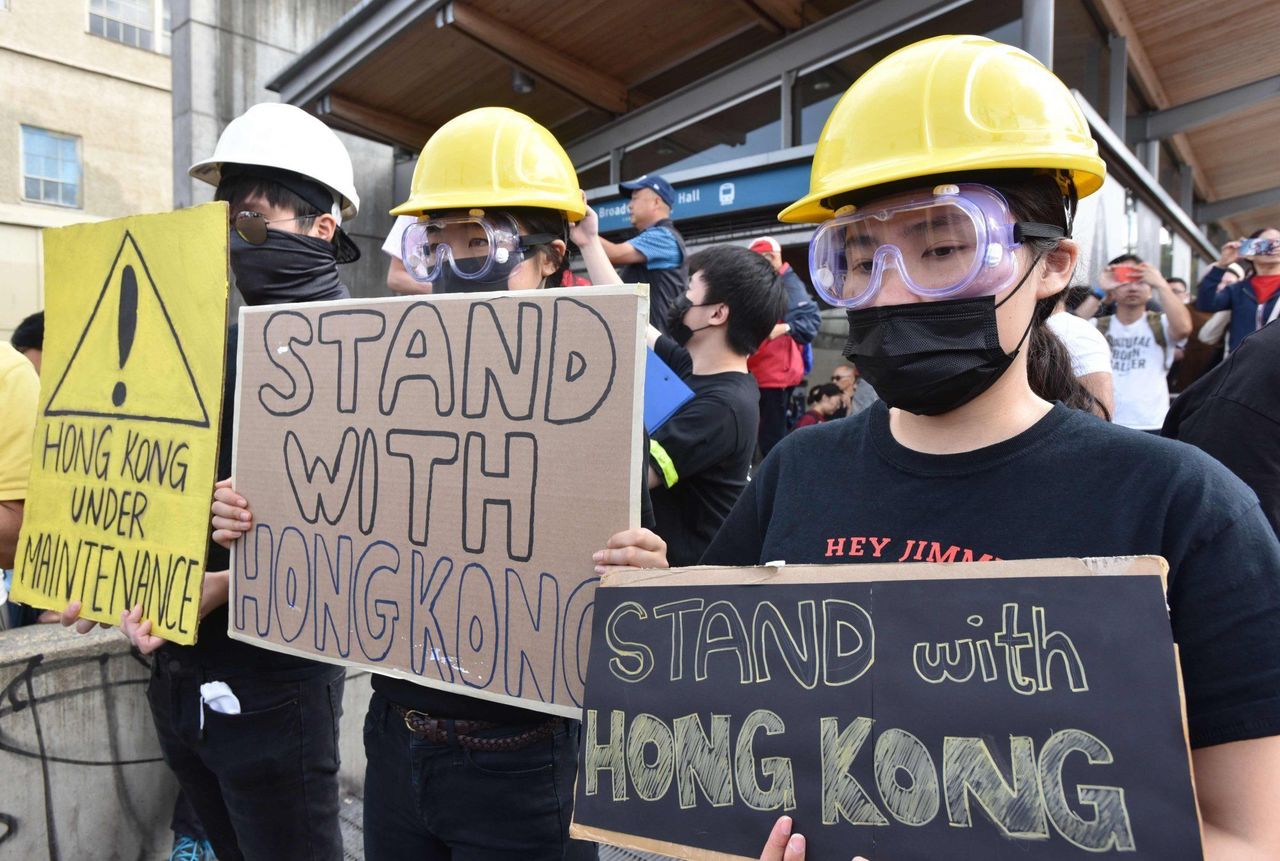 A rally is staged in Vancouver, Canada, in support of the Hong Kong protest movement in August 2019.

Despite those increases, the IRCC data likely falls short of depicting the true scale of the flight of Hongkongers to Canada, since it excludes those who already hold Canadian passports. Ottawa previously estimated there were 300,000 Canadian citizens living in Hong Kong, the vast majority of them former immigrants and their children.

Harvey said he had observed a “massive return” of these people to Canada since the introduction of the national security law.

“Within the first few months of the new law, we were getting inquiries from a lot of people wanting to know about the tax implications of going back to Canada,” he said. “It kept us very busy.”

Queenie Choo is the Vancouver-based CEO of Success, a non-profit group that has been providing social services to immigrants in Canada for 49 years. The group had not experienced so many inquiries from Hongkongers since before the handover, she said.

Choo said most recent Hong Kong clients who shared their political views were upset about the city’s upheaval.

“It’s just a fact that they are not very pleased with the political situation in Hong Kong. That’s their world view. It’s not for us to say yea or nay. But they share that world view because they are not comfortable [in Hong Kong],” Choo said, adding that Success was “committed to helping newcomers to Canada, regardless of their reasons for coming”. 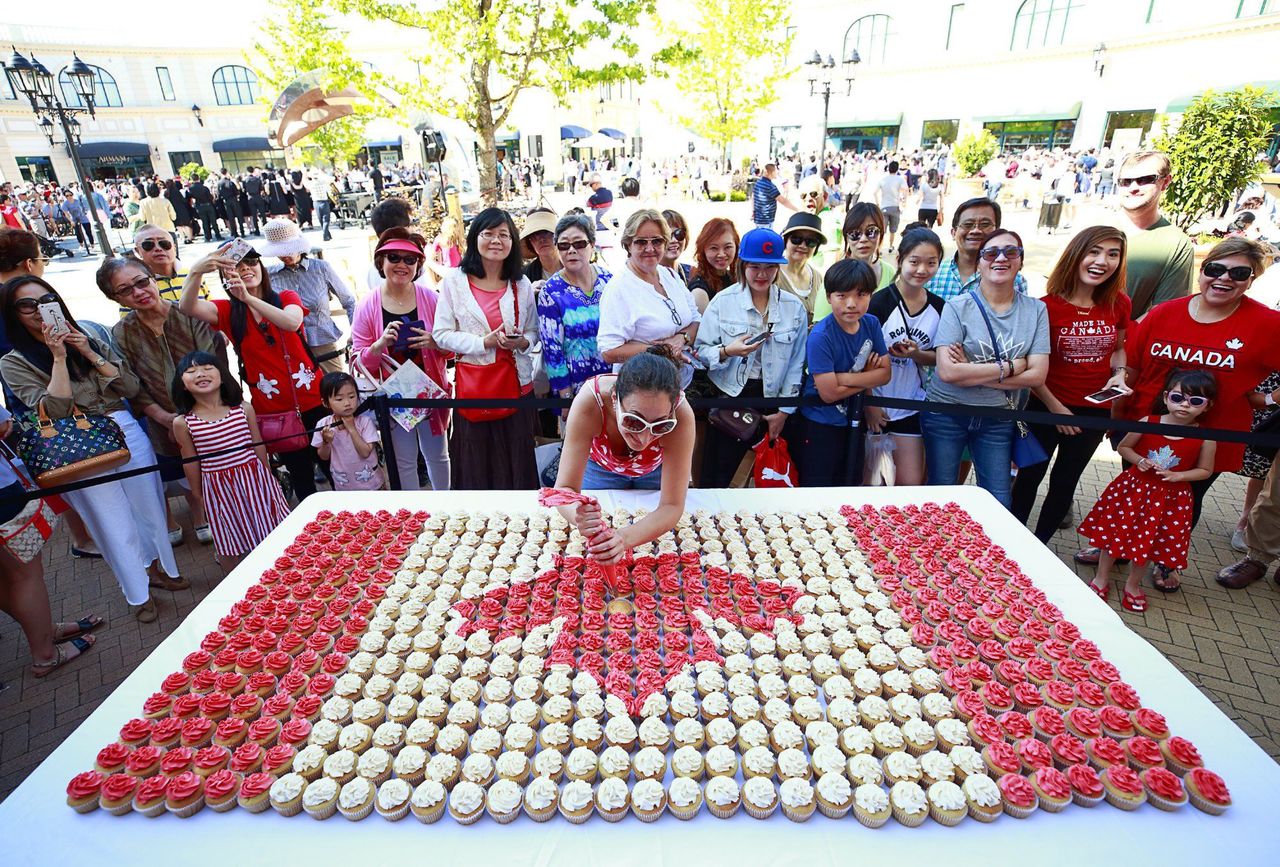 A crowd gathers to watch the icing of cupcakes that make up a Canadian flag during a celebration of Canada’s 150th birthday in Richmond, British Columbia. The Canadian city is home to tens of thousands of Hong Kong immigrants.

Most recent arrivals were well educated, with better English than previous generations of Hong Kong immigrants, said Choo. “Some are suited very well, and integrate very well, who are here to stay … but there are those who are in between, who go back and forth, back and forth. They might have a bit of a harder time.”

The new IRCC data only includes people who arrived on a Hong Kong SAR passport or a British National (Overseas) passport, a document created specifically for Hongkongers before the 1997 handover.

But the flow rapidly reversed, as newly minted Canadian citizens flooded back to Hong Kong after 1997. Immigration from Hong Kong to Canada bottomed out in 2010, when just 223 Hongkongers were granted permanent residency.

The most popular destination for the new wave of Hong Kong emigrants has been Britain, which granted 97,057 BN (O) visas to Hongkongers in 2021 as part of a programme in response to the security law.

Last year, 38,167 Hongkongers applied to police for certificates of no criminal conviction, a requirement for emigration to Canada, the United States and Australia. The last time applications were so high was 1989.