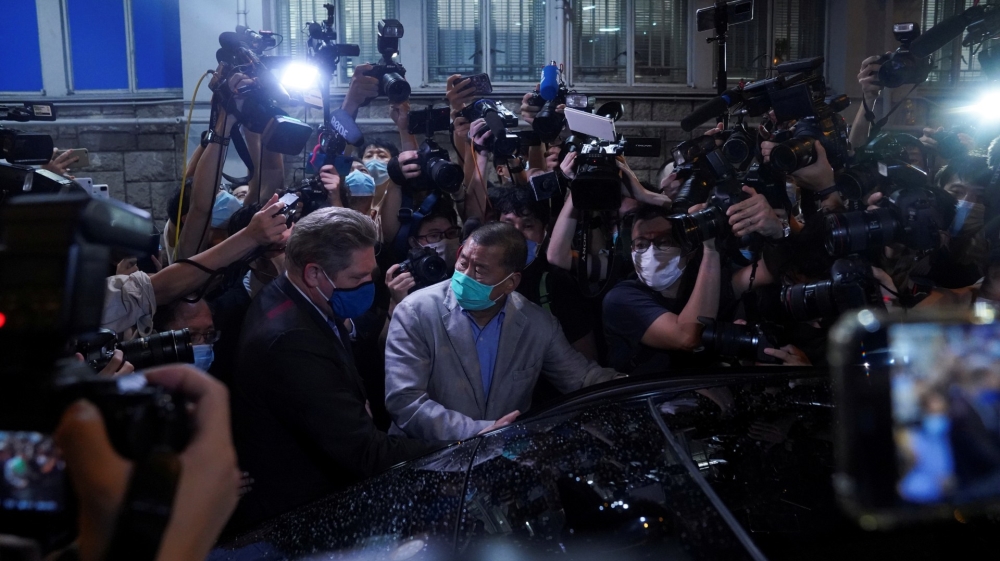 Media tycoon Jimmy Lai, owner of Hong Kong's Apple Daily, and pro-democracy activist Agnes Chow, have been released on bail after they were arrested as part of a crackdown under a new national security law imposed by Beijing.

Lai was released in the early hours of Wednesday, flanked by his lawyers, and greeted by supporters who chanted "fight till the end" and "support apple, have an apple a day", referring to the pro-democracy tabloid.

The ardent critic of Communist Party rule in Beijing was arrested on Monday for suspected collusion with foreign forces when some 200 officers raided his newspaper's offices and collected 25 boxes. Journalists at the newspaper had streamed on Facebook dramatic footage of the raid.

In total, 10 people were arrested on Monday, with the targeting of pro-democracy opposition figures in the semi-autonomous territory drawing international criticism and raising fears that Beijing is revoking freedoms promised under the "one country, two systems" formula that has been in place since the end of British colonial rule in 1997.

The sweeping security legislation, imposed on June 30, punishes anything Beijing considers secession, subversion, "terrorism" or collusion with foreign forces with up to life in prison.

Upon her release, Chow, who became a prominent figure in the so-called Umbrella Movement of 2014, called her arrest "political persecution and political suppression", according to the South China Morning Post.

"It's very obvious that the regime is using the national security law to suppress political dissidents," she said.

A huge media scrum outside Mong Kok police station, as @JimmyLaiApple is finally released on bail about 40 hours after his arrest under the NSL.

According to Oriental Daily, Lai was required to pay HK$500k (US$64.5k) in bail money, and HK$50m of his assets were frozen. pic.twitter.com/VEVYf2Cy2o

Chow also told reporters that she was "unprepared" when she was arrested on Monday night.

"I have been arrested four times before, but honestly this time, I was scared the most. And it was the hardest."

She addedthat authorities did not present any evidence how she violated the national security law.

The most recent crackdown came less than two weeks after police made their first arrests of four students under the new national security law.

'Dancing with the enemy'

The Apple Daily has responded with defiance over the arrest of Lai, with readers queuing from the early hours of Tuesday to get copies of the newspaper.

"Apple Daily must fight on," its front-page headline read.

"The prayers and encouragement of many readers and writers make us believe that as long as there are readers, there will be writers, and that Apple Daily shall certainly fight on."

Mainland-born Lai, who was smuggled into Hong Kong on a fishing boat when he was a penniless 12-year-old, is one of the most prominent democracy activists in the city.

The Chinese government has labelled him a "traitor" in the past and issued a statement supporting his arrest, while the Beijing-backed China Daily newspaper said Lai's arrest showed "the cost of dancing with the enemy".

The paper added that "justice delayed didn't mean the absence of justice".

Meanwhile, the United Kingdom said Lai's arrest was further evidence the security law was a "pretext to silence opposition", to which China's embassy replied by urging London to stop "using freedom of the press as an excuse to discredit" the law.

The US last week imposed sanctions on several top officials over what it said was their role in curtailing political freedoms in Hong Kong. China responded with sanctions on top US legislators and others.