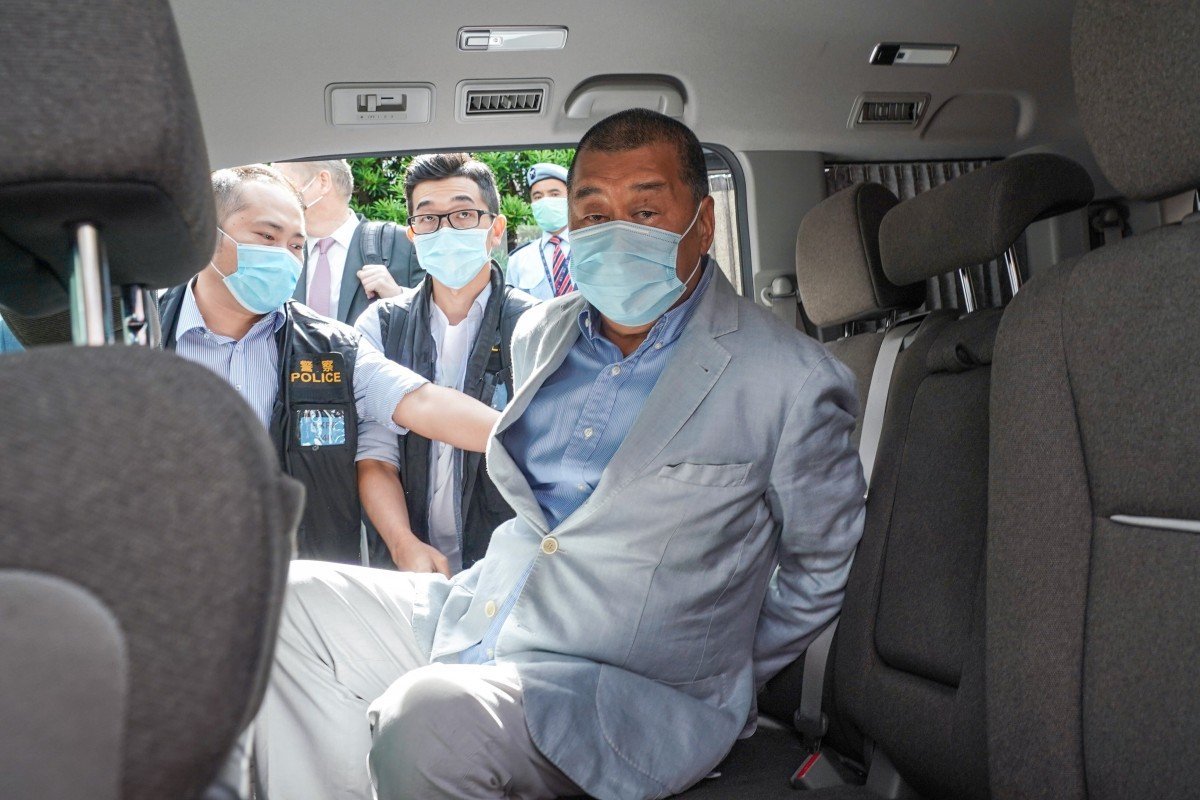 Founder of the tabloid-style Apple Daily was detained on suspicion of foreign collusion and fraud. His two sons and some of the newspaper’s senior executives were also detained in sweeping police operation.

* Police arrest Jimmy Lai, his two sons and four senior staff over alleged violations of the national security law and fraud
* Cheung Kim-hung, CEO of Next Digital, Apple Daily’s parent company, and CFO and COO Chow Tat-kuen among those arrested
* Former student activist Agnes Chow and two others arrested in another sweep in the afternoon
* Jimmy Lai’s top aide, Mark Simon, who was not in the city, sought by Hong Kong police
* Soon after the arrests, more than 200 police officers raid the newspaper’s headquarters in Tseung Kwan O
* Senior Superintendent Steve Li Kwai-wah, from the new national security unit, pledges not to search the paper’s editorial department or disrupt its operations
* Head of the Hong Kong Journalists Association calls search of press outlet on such a large scale unprecedented

Hong Kong’s Apple Daily founder Jimmy Lai Chee-ying was arrested on Monday for alleged collusion with foreign forces in the most high-profile police operation under the national security law since it was imposed by Beijing, along with six others linked to the tabloid-style newspaper.

Police also detained former student activist Agnes Chow Ting and two others accused of the same crime in another sweep in the afternoon.

The day of dramatic arrests began just after 7am when officers picked up Lai at his home in Ho Man Tin, followed by the arrests of two of the media mogul’s sons and other associates of Next Digital, the newspaper’s parent company.

In an unprecedented move, police then sent about 200 officers to the Tseung Kwan O premises of the company to conduct a raid that lasted nearly nine hours, controversially entering the paper’s newsroom on the second floor, inspecting some desks and sparking an outcry over the implications for media freedoms.

Officers later maintained that they did not take away or pry into journalists’ work and that those arrested were not being held for any crime related to the media. Police left the building with stacks of documents in blue plastic boxes.

Sources said Lai was arrested “for collusion with a foreign country, uttering seditious words and conspiracy to defraud”.

Senior Superintendent Steve Li Kwai-wah, from the newly established national security unit under the police force, said a month-long investigation had found three of the suspects had been involved in a group to call for sanctions against Hong Kong by foreign countries, while others had helped them channel money in through an overseas bank account. He did not name the offenders. 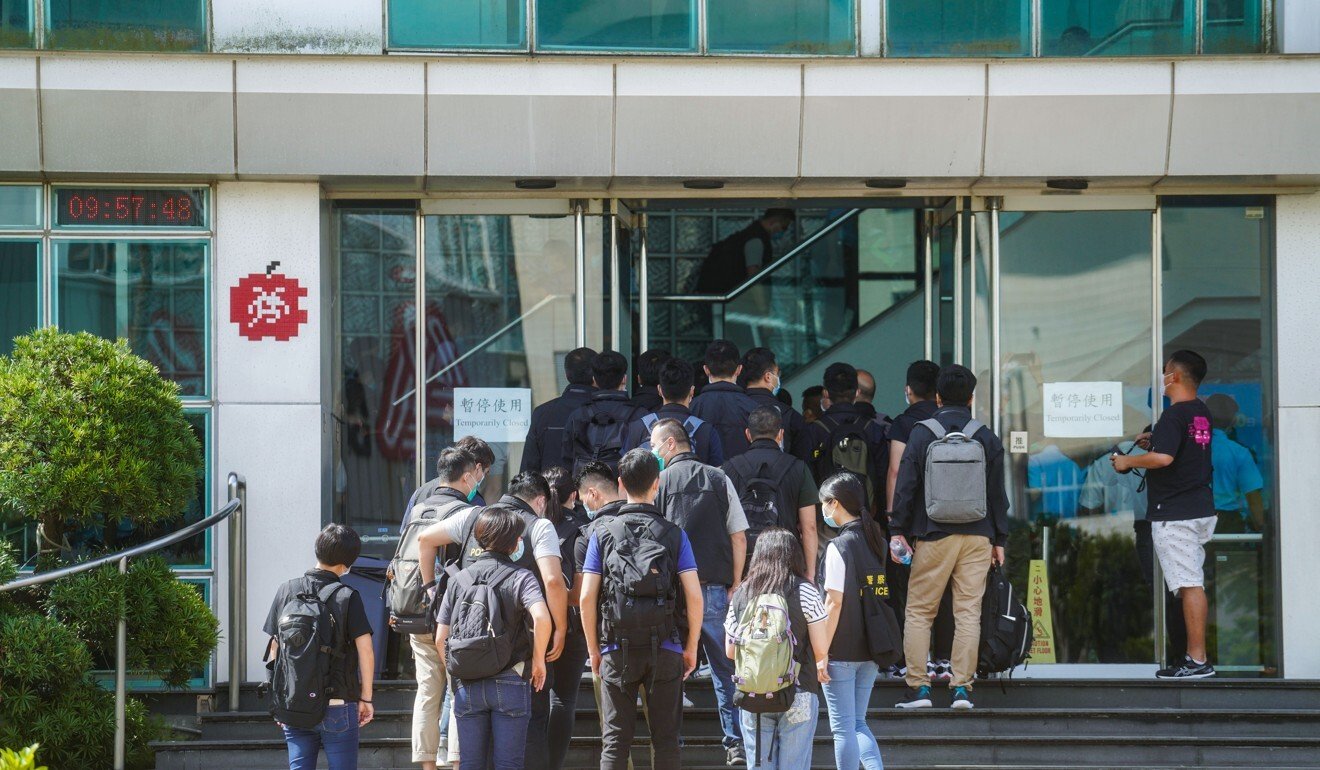 A spokesman for the cabinet-level Hong Kong and Macau Affairs Office in Beijing said it “resolutely backed” the police’s action to arrest Lai and his colleagues and sons, labelling them as a “faction that subverts China and stir chaos in Hong Kong”.

Criticising Lai, the spokesman said: “He brags about fighting for America arrogantly, taking part to plan, organise and initiate a raft of unlawful resistance movements, using his media to create and spread rumours, inciting and supporting violence, and providing funds for those advocating [Hong Kong independence].”

Lai, a staunch supporter of anti-government protests who has been arrested before on lesser charges of joining illegal demonstrations, is a self-made entrepreneur known for his early success in founding clothing retailer Giordano in the late 1980s before venturing into the media landscape. His showpiece publication, Apple Daily, is a tabloid-style paper that is strongly anti-Beijing and anti-government. 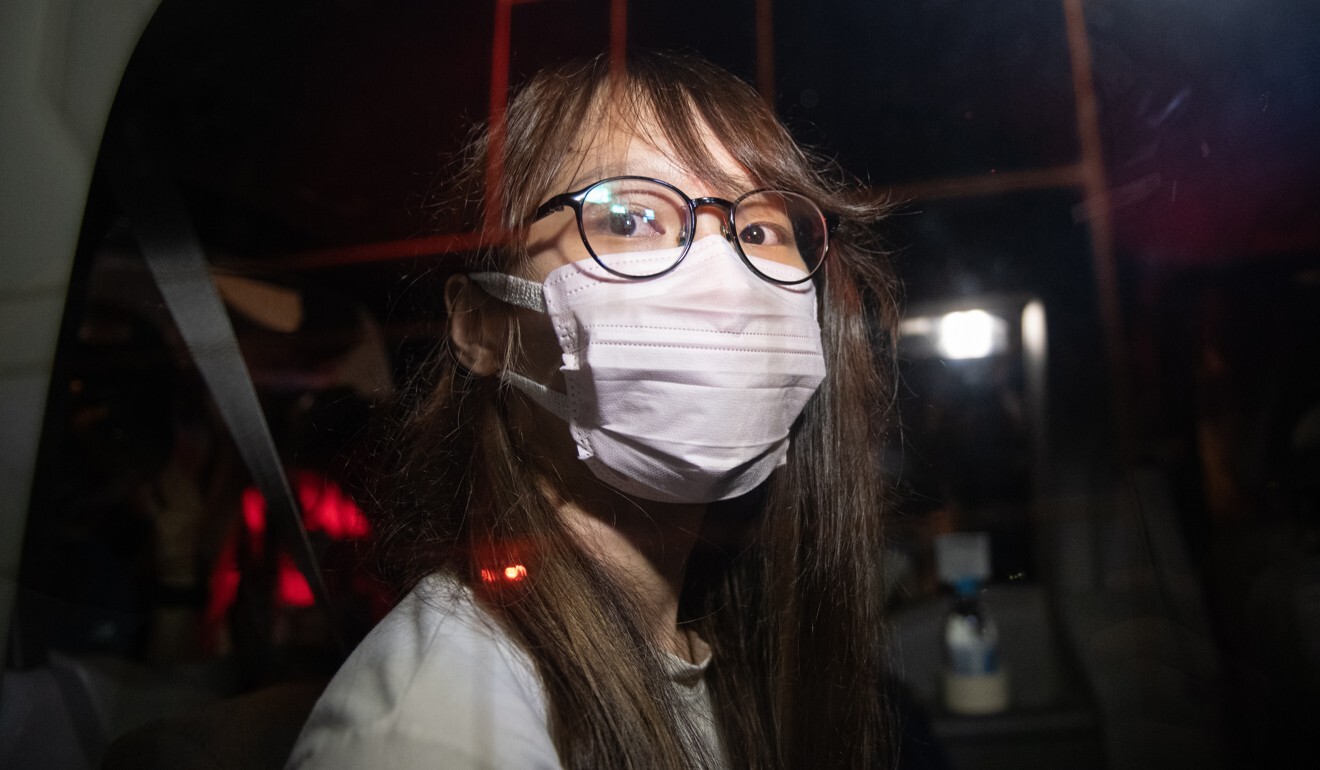 Pro-democracy activist Agnes Chow sits in a police van after being arrested at her home on Monday. Photo: EPA-EFE

Lai was in the United States to meet US Vice-President Mike Pence and Secretary of State Mike Pompeo last year, and has routinely been accused of collusion by the pro-Beijing camp.

Lai’s elder son, Timothy Lai Kin-yang, 42, was arrested on suspicion of conspiracy to defraud, according to another source. Next Digital CEO Cheung Kim-hung was also detained over the same offence, along with chief administrative officer Wong Wai-keung and Next Media Animation Ltd director Kith Ng Tat-kong.

Lai’s top aide, Mark Simon, who was not in the city, was also wanted by police over unspecified allegations, according to the source.

In the afternoon swoop, sources told the Post, Agnes Chow Ting, a close associate of former student leader Joshua Wong Chi-fung, was arrested on suspicion of collusion with foreign or external forces to endanger national security.

The other two arrested were Wilson Li Chung-chak, a freelancer for ITV and former member of the now-disbanded student activist group Scholarism, and Andy Li, a member of the Election Observation Mission – set up to monitor last November’s district council elections.

The search of the Apple Daily office began at around 9.45am, with journalists accusing officers of obstructing their work and going beyond a court warrant to view their editorial documents.

But police said they had conducted a search on the second-floor editorial department of the building only because the suspects were on that floor.

They were seen taking away boxes of documents and electronic equipment, while staff entering the premises were required to register with them. Hong Kong police cordon off an office area of the Apple Daily newspaper after arresting its founder Jimmy Lai on suspicion of foreign collusion. Photo: Handout

Both Lai and Cheung, the CEO, were brought back to the office at one point during the search.

Lai said he was not sure about the newspaper’s future. “You swallow whatever is served on your plate,” he said, using a Cantonese expression referring to improvisation.

Cheung was more defiant. “For sure, Apple Daily will hang in there,” he said, as he was escorted from the office by police.

Ryan Law Wai-kwong, Apple Daily’s editor-in-chief, told the Post it would be business as usual for the editorial department. Next Digital informed the stock market operator that the arrests would not affect the company’s operations and finances.

A police source said the allegation of fraud was related to an investigation that was launched after some pro-Beijing groups, including Politihk Social Strategic, accused Lai of using the offices of Next Digital to provide secretarial services, which could be a breach of land-lease terms and amount to providing false information to the Lands Department to evade rent.

Lau Siu-kai, vice-president of Beijing’s semi-official think tank in the city, the Chinese Association of Hong Kong and Macau Studies, said the central government was demonstrating its will to stop the city from being turned into a hub for collusion with foreign forces.

He said he did not believe it was prompted by the US imposing sanctions on 11 Hong Kong and mainland Chinese officials accused of harming the city’s autonomy.

“I believe many who have been in the industry for decades have not seen this before,” he said. “This is what we have seen in some of the third-world countries where the press and freedom of the press are suppressed. But I could not imagine seeing this in Hong Kong.”

A spokesman for British Prime Minister Boris Johnson expressed deep concern, saying, “This is further evidence that the national security law is being used as a pretext to silence opposition.”

The Foreign Correspondents’ Club described the police action as “a dark new phase in the erosion of the city’s global reputation”.

Chris Patten, the city’s last British colonial governor, called it “the most outrageous assault yet on what is left of Hong Kong’s free press”.

Next Digital shares finished on Monday up 16.5 HK cents, or 183 per cent, at 25.5 HK cents after jumping as much as 344 per cent at one stage, as opposition activists and Apple Daily supporters urged a show of solidarity with the company.