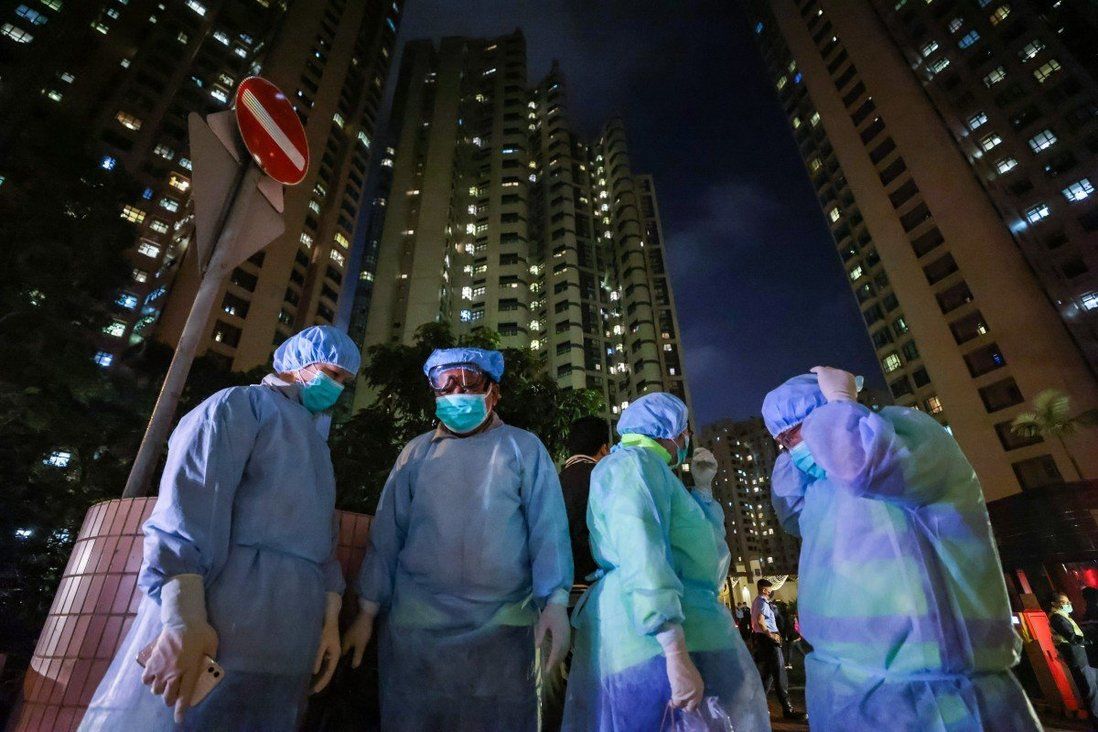 Fears of fifth coronavirus wave as 10 new infections linked to outbreak at Ursus Fitness in Sai Ying Pun. Health minister appeals to residents to get vaccinated.

Hong Kong locked down another 11 residential buildings in wealthy areas of the city on Sunday, after officials confirmed 24 new cases of Covid-19 and warned the coronavirus was still spreading in the community.

Amid fears a fifth wave of infections could strike, officials moved to test more residents in the Central and Western districts near Ursus Fitness, the gym at the centre of a super-spreading cluster.

The buildings put under lock down were Fung Lam Building, Tung Ming Court, Lee Wai Building, 63 Pokfulam, and Kingsfield Tower on Pok Fu Lam Road, which are in the same neighbourhood as the gym, as well as Dynasty Court on Old Peak Road.

Earlier, government ministers urged residents to get vaccinated, and said while experts would investigate the cases of residents who died soon after receiving Covid-19 jabs, people should not lose faith in the vaccines.

About 13,300 people received their first coronavirus vaccine shot on Sunday, including some 7,900 who got the Sinovac vaccine and 5,400 others who took the BioNTech version. That brought the total number of people vaccinated since the programme started in late February to 190,700.

Officials said the vaccination programme would be speeded up and expanded so more people could be inoculated.

Ten of Sunday’s new cases were of unknown origin, while another 10 were linked to the gym in Sai Ying Pun, an area popular with expats, taking the number of infections in the cluster to 109, and the total number of close contacts quarantined to about 750.

Health authorities also raised concerns over a potential outbreak at The Harbour School in Ap Lei Chau, after two teachers, including an IT instructor who was a client at Ursus Fitness, were confirmed as infected.

Dr Albert Au Ka-wing, the Centre for Health Protection’s principal medical and health officer, said another art teacher from the school had tested preliminary-positive on Sunday, and 35 students and six teaching staff would be quarantined.

According to a message on its website, the school has closed all of its three campuses on Hong Kong Island, but after the regular press conference on Covid-19 updates, the school and some parents said they had not been told about any quarantine arrangements by authorities.

Officials said all the latest cases were local, while more than 20 people had tested preliminary-positive. The total number of confirmed cases in the city has risen to 11,281, with 203 related deaths.

Au said it would still take another week to contain the growing gym cluster and warned of new chains of transmission among the close contacts of those infected.

“Although the number of cases in this cluster has slightly decreased today, we have to be mindful that the incubation period of this disease is up to 14 days, so we expect that there would subsequently be more and more cases arising from [those sent to] quarantine centres or [through] testing,” Au said.

“Another point is that there are secondary transmissions arising from the customer and staff of Ursus Fitness centre. It is possible that there will be secondary or even tertiary spread in other places, such as in their workplaces or [among] family members.”

Separately, while there were no imported cases on Sunday, the Department of Health has suspended Cathay Pacific passenger flights from the Philippines for two weeks between March 15 and March 28, after five passengers who arrived in Hong Kong on Saturday were found to be infected.

Four buildings in two residential estates in the Mid-Levels area were put under lockdown on Saturday – towers one and two of Robinson Place, as well as Blessings Garden’s phases one and two. About 1,855 residents had been tested as of 2am, but no confirmed Covid-19 cases were found.

There was no answer at 150 of the 980 households that officials visited during the compulsory-testing operation, which ended at 9am.

Some of those households not responding were home to either confirmed cases or quarantining residents, while others might have been vacant, officials said. A total of 370 staff were involved in the operation.

Hong Kong’s Secretary for Food and Health Professor Sophia Chan Siu-chee earlier appealed to the public to get vaccinated, a day after authorities revealed that two more people had died after getting Sinovac Covid-19 jabs.

In total, six people have died after receiving the mainland-made Sinovac shots. Experts had earlier concluded there were no direct links to the jabs in the first two deaths but they were still investigating the rest of the cases.

Late on Sunday officials said four people had reported adverse reactions to the vaccines. One received the BioNTech jab and the rest the Sinovac shot, two of the latter group were hospitalised for observation after reporting signs of allergy, palpitation, headache, and nausea.

Chan said the two coronavirus vaccines that had been approved for emergency use by the Hong Kong government, namely Sinovac and BioNTech, were considered to be safe and effective.

“[The benefits] of getting vaccinated outweigh the risks, we should trust in science.” Chan said in her Sunday blog post.

“Although many medical experts have pointed out several abnormal cases reported in recent days are not directly related to the vaccine, I can understand that some members of the public feel a little bit worried about this. So, if you have any concerns about your health, you may consult your family doctor first before getting vaccinated.”

Speaking to reporters on Sunday, Secretary for the Civil Service Patrick Nip Tak-kuen said the government hoped to lower the age threshold and streamline the vaccination process, allowing more people to get inoculated.

“If we lower the age group eligible for the vaccine, so that even if they are not in the elderly age range, people don’t need to provide proof of which sectors they work in. This would make it easier to implement,” Nip said.

About 3.7 million people were eligible to take the vaccines after the government expanded the vaccination programme last Tuesday to cover seven more groups, including those working in catering and tourism, and businesses affected by social-distancing rules such as gyms and beauty salons. Those aged 60 or above were first prioritised for the shots.

Meanwhile, messages claiming young children had been separated from their parents and later restrained in their hospital beds after testing positive circulated on social media.

In one post on Facebook, it was claimed two brothers, aged one and five, were restrained, left unwashed, and not given a change of clothes. The boys’ mother said she found her sons with food all over their beds, wearing the same clothes they had worn when admitted.

“In general, for toddlers or young children who test positive but are not with their parents, we will discuss with the CHP how to arrange isolation and quarantine measures for them to facilitate childcare,” she said.

A source said the use of restraints was common practice in the city’s hospitals for patients who were unable to care for themselves. They were also subject to certain clinical decisions and requirements. 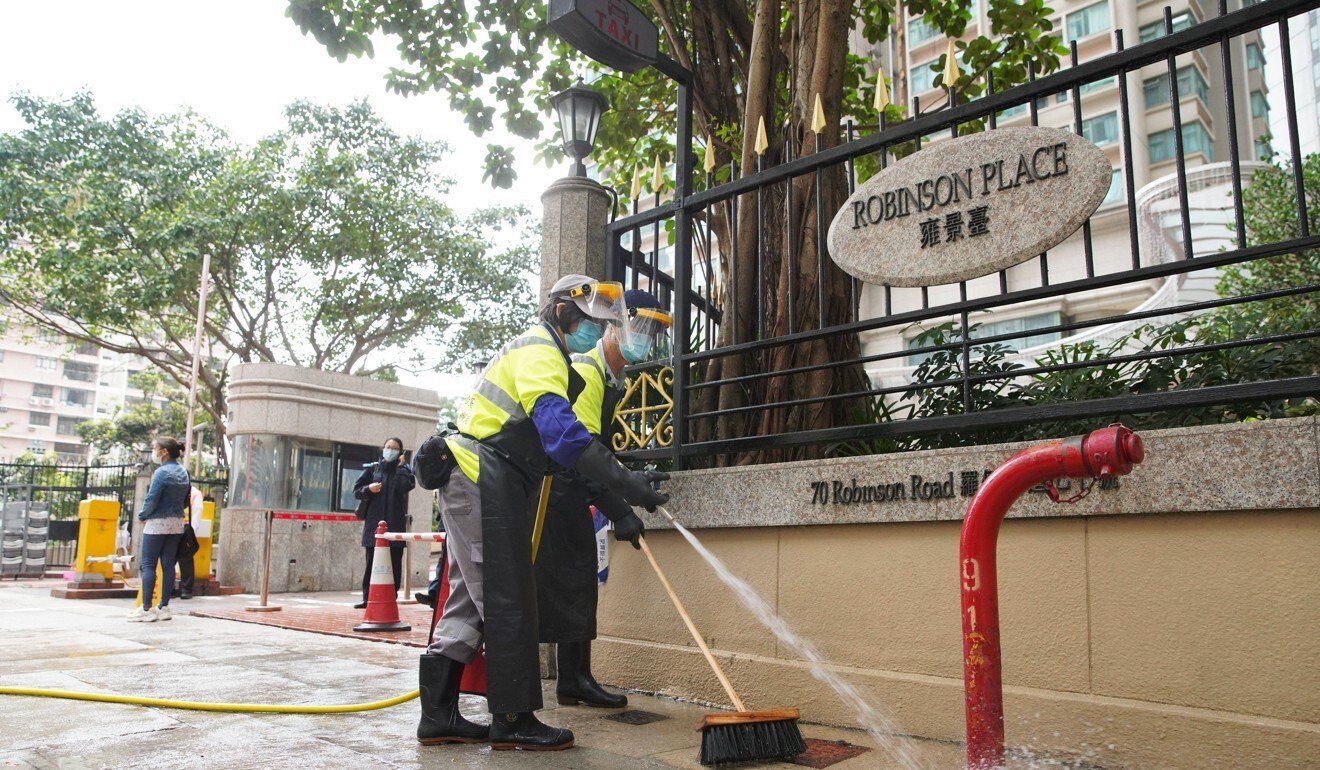 Workers disinfect an area outside Robinson Place, on Robinson Road, Mid-Levels, on Sunday.

In a U-turn, authorities decided on Saturday not to send 20 pupils from Kellett School into quarantine after a teacher tested positive. Instead, the children, aged nine or 10, would just need to get tested.

But eight babies and their parents from a playgroup class at the Baumhaus Institution in Wan Chai were sent to quarantine after an infected mother had visited the school.

Even though all parents, including the infected mother, wore a mask when they attended the Tuesday class, some babies did not.

The Department of Health told the Post that young children in kindergartens or play classes who “may not wear masks well” were more likely to be quarantined.

Older students who wear masks and do not involve close contact or activities may only require compulsory testing, they added.

Kellett School will close its Pok Fu Lam and Kowloon Bay campuses this week, while Baumhaus Institution will remain shut until further notice.