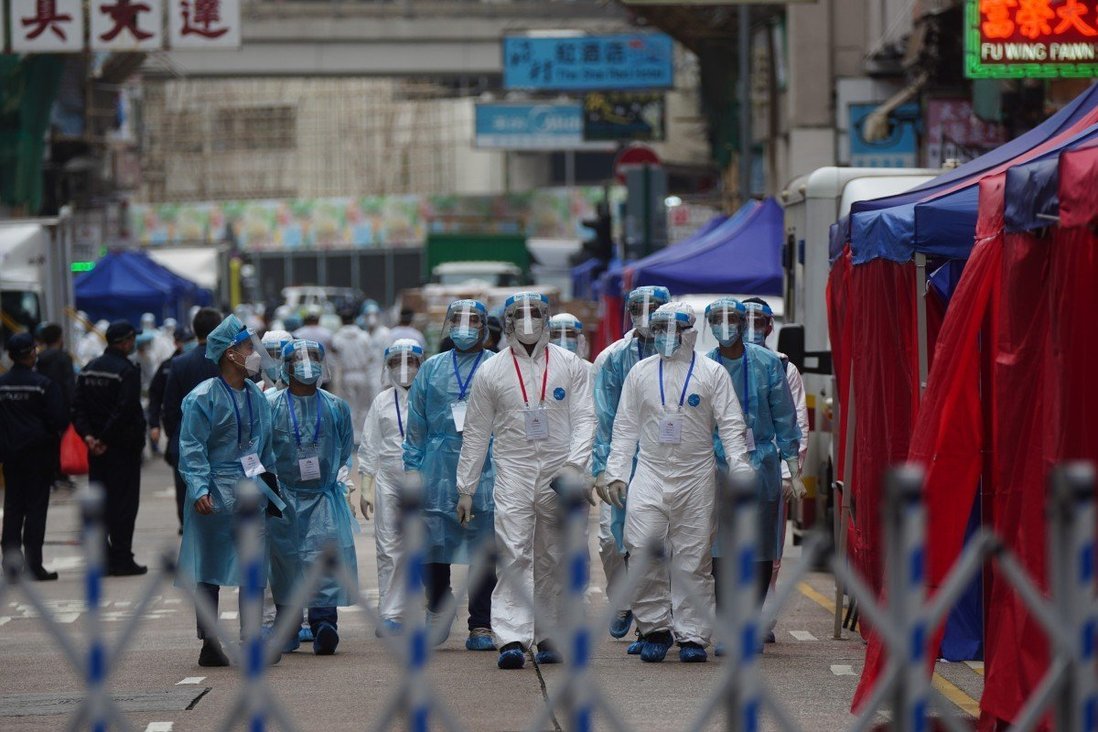 The city’s health minister has defended the move in the heart of the Yau Tsim Mong district as necessary, despite a 0.17 per cent positive rate and the fact that the whereabouts of people from about 470 flats remained unknown.

Residents have criticised the arrangements, saying they were unaware when the lockdown was expected to start. Officials have also come under fire for allegedly supplying improper food to many of those forced to remain indoors.

Here, the Post looks at Hong Kong’s strictest anti-pandemic measure yet and weighs whether the step was a success. 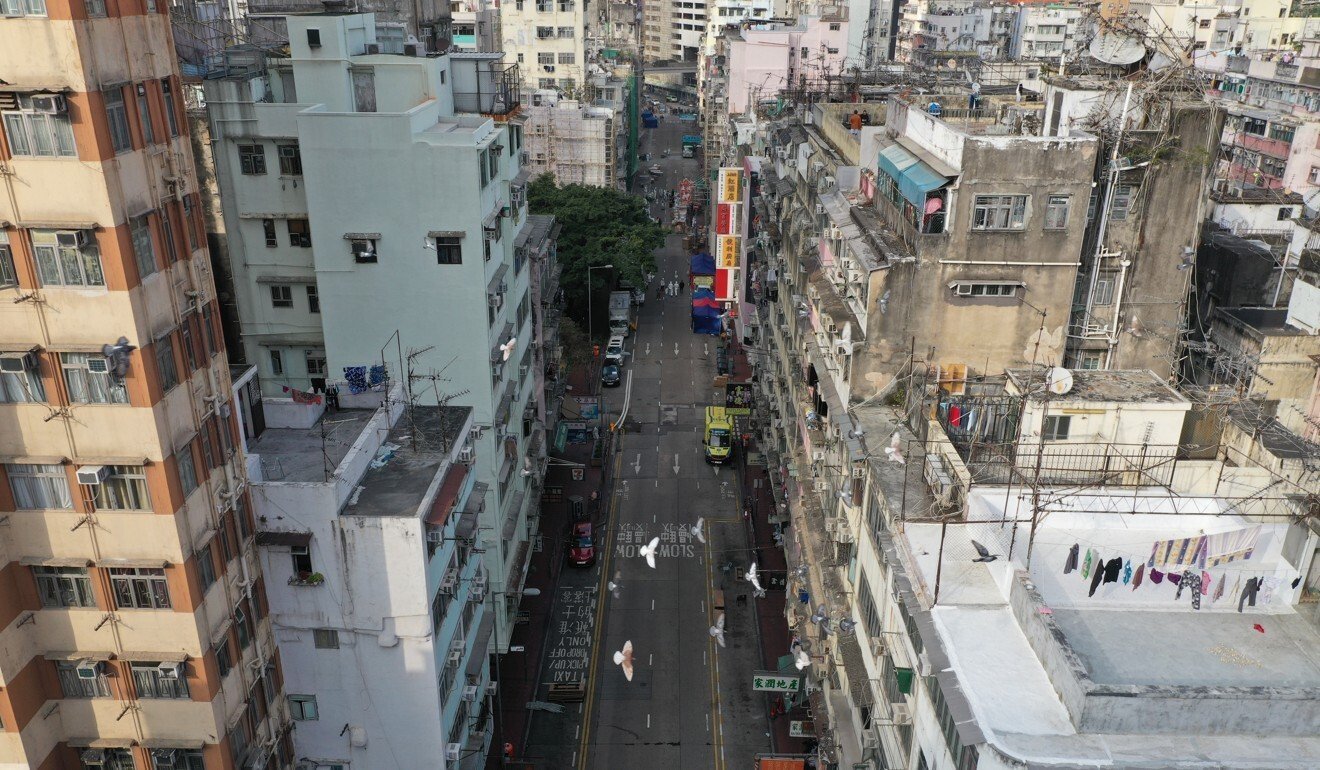 An aerial view of the area under lockdown in Jordan.

Was the timing right?

The government officially confirmed the measure when officers began locking down the restricted area, bordered by Woosung Street, Nanking Street, Battery Street and Kansu Street, at 4am on Saturday. Screening was expected to take 48 hours.

However, microbiologist Dr Ho Pak-leung, from the University of Hong Kong, said it would have been better if the step had been taken one to two weeks earlier.

“This kind of mandatory testing would have had a better effect if it could have been done in mid-January,” Ho told a radio show on Monday. “Those residents who were still in their incubation period – hundreds or even up to 1,000 of them – have been going to work or even moved away from the district, spreading the virus outside.”

Chinese University Professor David Hui Shu-cheong, who advises the government on the pandemic, said he had previously suggested authorities implement a stay-at-home order in the area in the first two weeks of January.

But officials rejected it based on a high rate of local residents taking part in a voluntary testing programme. There were also concerns that buildings in the area were already contaminated by the coronavirus and that it would be unsafe for residents to stay put, he added.

Hui said the government’s U-turn came after 162 cases were reported in 56 buildings in the area in the first 20 days of January, and sewage consistently tested positive for the virus.

“So yes, maybe it is a little late, but I can also understand their concerns and they also needed time to bring in 3,000 people to help,” he said.

Was the scale of the area appropriate?

The area placed under lockdown spanned nearly 500,000 sq ft, with the government deploying 3,000 civil servants, police and other disciplined services officers to carry out emergency testing at 51 temporary stations.

Hui said that while the lockdown could have covered a larger area, “as many cases were outside the boundaries of the zone”, the manpower required for such an effort “would also have to be taken into consideration”.

He said the area should be expanded if the government were to run a second lockdown to avoid leaving a large number of residents outside the testing area. 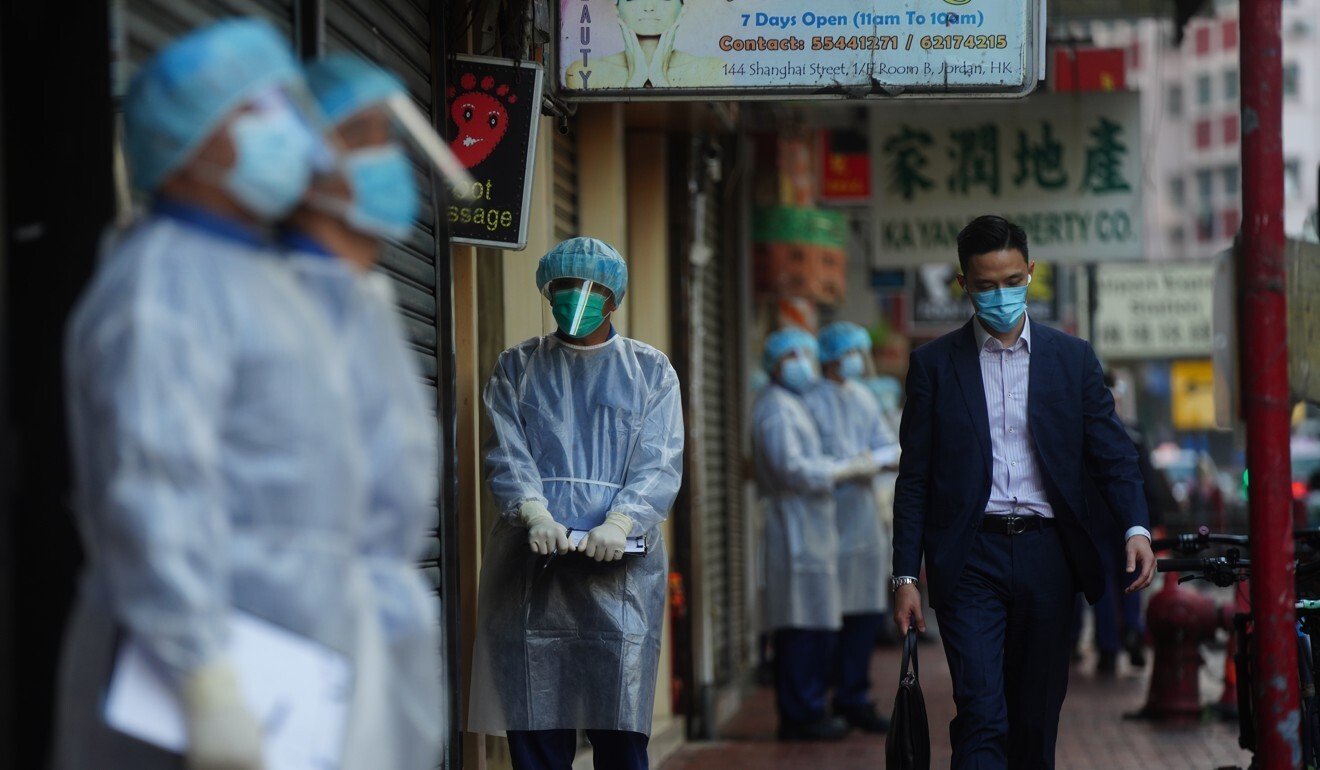 Officers knocking on every flat door in the locked-down area received no answer at about 470 of them.

How did residents react and how could arrangements improve?

As news of the lockdown leaked ahead of its roll-out, residents had a short window to leave. On Sunday, home affairs minister Caspar Tsui Ying-wai said there had been no answer at about 470 flats when officers made house calls and that the government would try to locate them by matching existing data.

Hui said it was inevitable that news leaked as many people had been roped in to help institute the restrictions. But if a second lockdown were needed, information should be kept under wraps for as long as possible, he suggested. “Particularly illegal residents, if they leave, it would be very difficult to track them down,” he said.

Meanwhile, some residents trying to return home found themselves briefly separated from family members when the streets were cordoned off. Secretary for Food and Health Professor Sophia Chan Siu-chee later clarified residents were allowed to return home.

Food was also an issue for many. The area is home to many members of ethnic minority communities, and Muslim and Hindu residents said they could not eat much of the food provided, which included canned spam and fish. Elderly residents also struggled to prepare their own meals.

In response, senior Hong Kong officials said they had been delivering meals to the needy and had included vegetarian options in food packets, including bread, snacks and fruit. 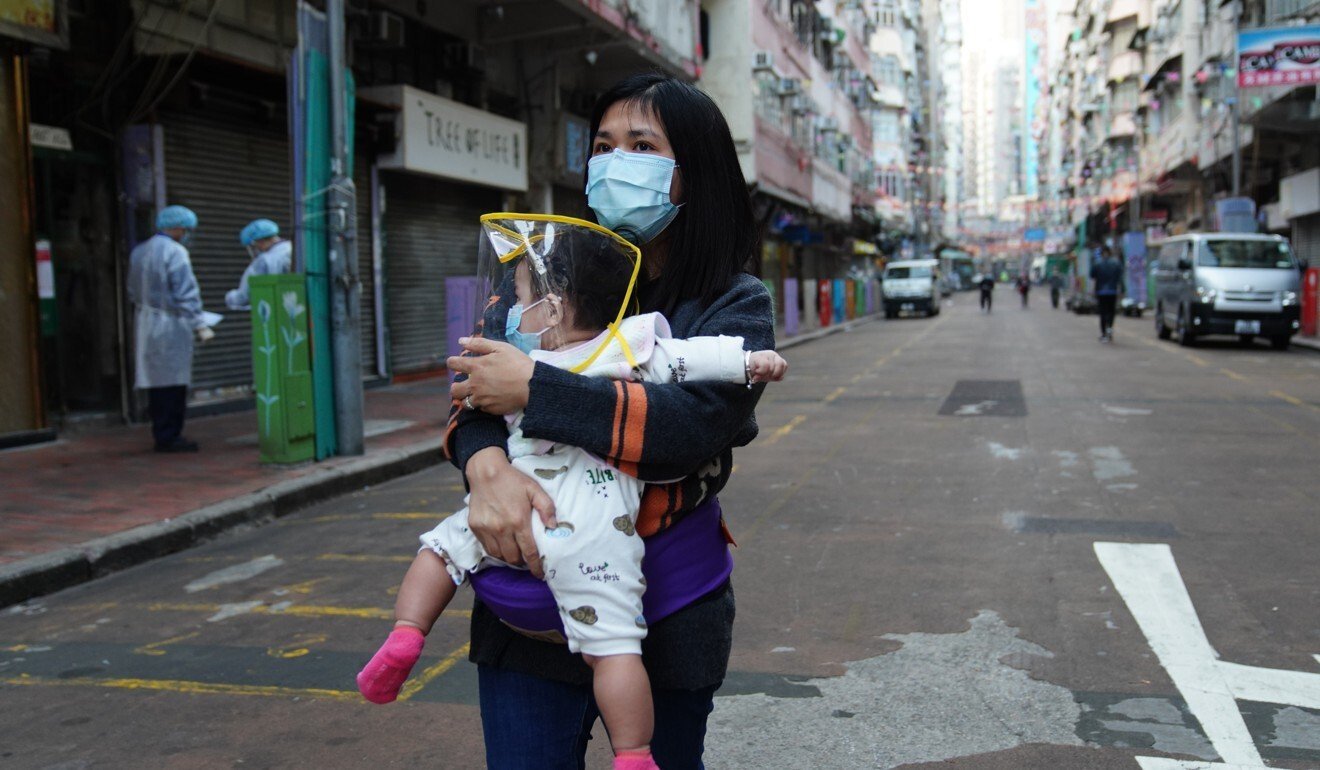 A woman in Yau Ma Tei after the lockdown is lifted.

What are the differences between lockdowns in Hong Kong and mainland China?

Chief Executive Carrie Lam Cheng Yuet-ngor faced questions on whether the lockdown was imposed following orders from Beijing. She denied receiving such an instruction and said the restrictions were nothing compared to what had been enacted on the mainland. She referred to the Hong Kong plan as a “restriction testing declaration”.

Hui also said the scale of the mainland’s lockdowns was larger and the mobilisation of manpower to implement them was much faster. “The mainland has much better experience, just one to two cases in a district is enough to trigger a lockdown and carry out mass testing there within a few days,” he said.

“Residents’ compliance there was also much higher.”

Hong Kong would only need to take more drastic measures if absolutely necessary, he added.

Was the lockdown effective?

“The direct and indirect costs are relatively high, with 3,000 staff deployed, coupled with the impact on residents who were immobilised for two days. But with 13 cases found in nine households, the positive rate is not that high,” Leung said.

He also questioned whether it was necessary to seal off the entire area, adding that in most previous cases, residents in areas with a high number of infections had readily submitted to mandatory testing.

However, Hui, HKU’s Ho and microbiologist Professor Yuen Kwok-yung all said the measure was effective. 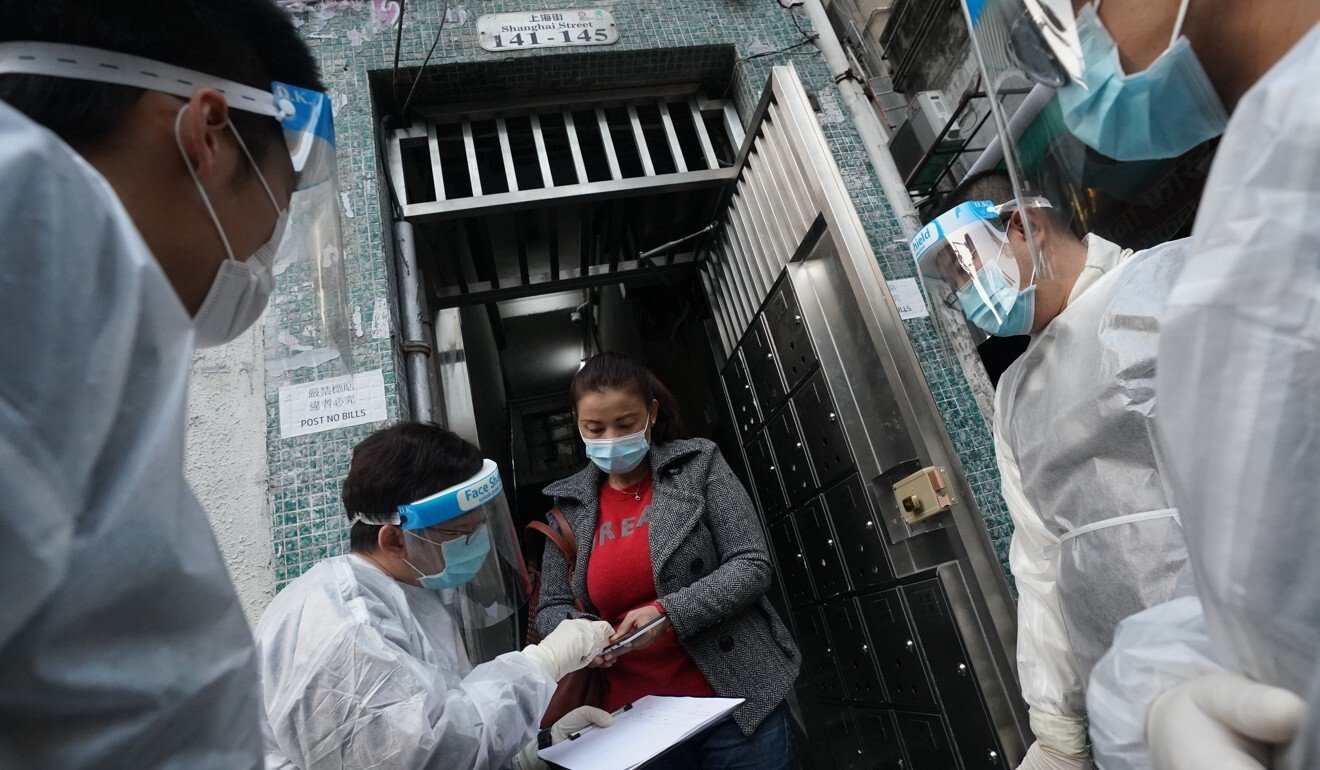 More than 7,000 Yau Tsim Mong residents were screened and 13 coronavirus infections detected during the lockdown.

Ho said the positive rate should not be calculated based only on the 7,000 residents being screened.

“Before the government sealed off the area, 150 to 160 infected cases were already detected in the zone. If we add the 13 new cases to that, the positive rate should in fact be nearly 2.5 per cent,” Ho said.

Yuen, who also advises the government on the pandemic, argued that the weekend lockdown was needed, saying the 0.17 per cent positive rate was not low.

“If we are comparing the positive rate with the [Hong Kong government’s] voluntary mass screening programme [last year], which had a positive rate of about 0.004 per cent, then a 0.17 per cent this time was actually fair,” said Yuen.

Hui said the measure had been “worthwhile”, while adding that more than 7,000 people had been screened in 48 hours.

“If this project had not been carried out, the virus would have been spread by residents who had not taken part in voluntary testing when they went to work or visited restaurants and shopping malls,” he said.