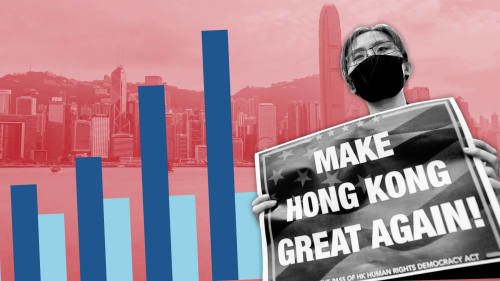 Hong Kong listings dry up under shadow of protests

When AB InBev’s Asia brewing business launched its second attempt at a Hong Kong stock market listing last week, chief executive Jan Craps faced a volley of questions about whether the territory was still the best venue for an initial public offering of almost $5bn after more than three months of political upheaval.

Mr Craps is unusually upbeat. The flow of initial public offerings in Hong Kong has nearly evaporated in recent months, as companies hold off on planned listings in the face of volatility spurred by an escalating US-China trade war and intensifying violence between police and protesters on the Asian financial hub’s streets.

Hong Kong Exchanges and Clearing, the local bourse operator, has seen only two IPOs price since the end of July, raising a total of just $33m and taking cumulative funds raised in 2019 to $10.7bn, according to data from Dealogic.

That is just a third of the total from this time last year, when Hong Kong was well on its way to taking the global listings crown for 2018. Meanwhile, the number of active listings applications from companies yet to go ahead with an offering has climbed to a record high of more than 200, according to KPMG.

The fall is particularly sharp thanks to a run of big-ticket listings in 2018 that saw Xiaomi, Meituan Dianping and China Tower raise almost $16bn in total between the end of June and mid-September.

But HKEX’s rivals in New York have seen no such drop-off. The New York Stock Exchange and Nasdaq have priced a combined $5.39bn worth of IPOs in August and September across 19 deals. Both are now on a course to dethrone Hong Kong’s exchange as the world’s top listings destination just as it targets London Stock Exchange shareholders with a charm offensive, selling them on Hong Kong’s potential as the gateway to a globalising Chinese market in its bid to buy the British bourse.

Jason Elder, a partner at law firm Mayer Brown in Hong Kong, said the uptick in volatility for the territory’s stock market had unnerved companies that were in the process of listing this year.

“It becomes very difficult to price your IPO against a volatile window, I think that’s why people are waiting,” Mr Elder said. But he added there was little sign of companies abandoning Hong Kong for other bourses, with recent reforms to the exchange’s listing rules — such as allowing weighted voting rights — helping prevent applicants from changing venues.

“That all helps, but it only helps against a backdrop of positive investor sentiment,” he said.

Sentiment in Hong Kong has worsened markedly since the end of July, with the Hang Seng stock index falling 9 per cent in early August. Earlier this month, Fitch became the first big rating agency to downgrade the territory since the start of mass protests demanding withdrawal of an extradition bill that would have allowed criminal suspects to be sent to mainland China.

Protester demands have since expanded to include greater police accountability and democratic reforms, with large-scale demonstrations continuing despite plans announced by Carrie Lam, Hong Kong’s chief executive, to fully withdraw the bill.

“The Hong Kong IPO market has been absolutely terrible,” said the head of Asia capital markets at one international bank. He added his bank and others had also begun opening credit lines to many high-growth private companies in the region, relieving the pressure for a quick listing.

Hong Kong also faces a challenge from China’s new technology and science-focused Star Market in Shanghai. The high-profile project has direct backing from president Xi Jinping and threatens to swipe Chinese tech listings away from the territory, although there is no sign yet that it could touch bigger deals such as AB InBev or the planned secondary listing of Alibaba, which could raise up to $20bn if it goes ahead.

Louis Lau, a partner at KPMG China’s capital markets advisory group, said there were “a lot of uncertainties, globally and locally” behind the quiet spell for IPOs, including the market impacts of trade tensions and recent social unrest in Hong Kong. “It all depends on the market conditions,” he said.

KPMG expects the taps of Hong Kong’s IPO pipeline to turn back on in the fourth quarter amid encouraging signs such as the AB InBev listing and the revival of another application by logistics company ESR Cayman. But Mr Lau added that the chance of Hong Kong catching up with New York’s bourses by the year’s end really depended on whether all big deals, such as that by Alibaba, are completed by the end of the year.

“Otherwise the gap is pretty big,” he said.