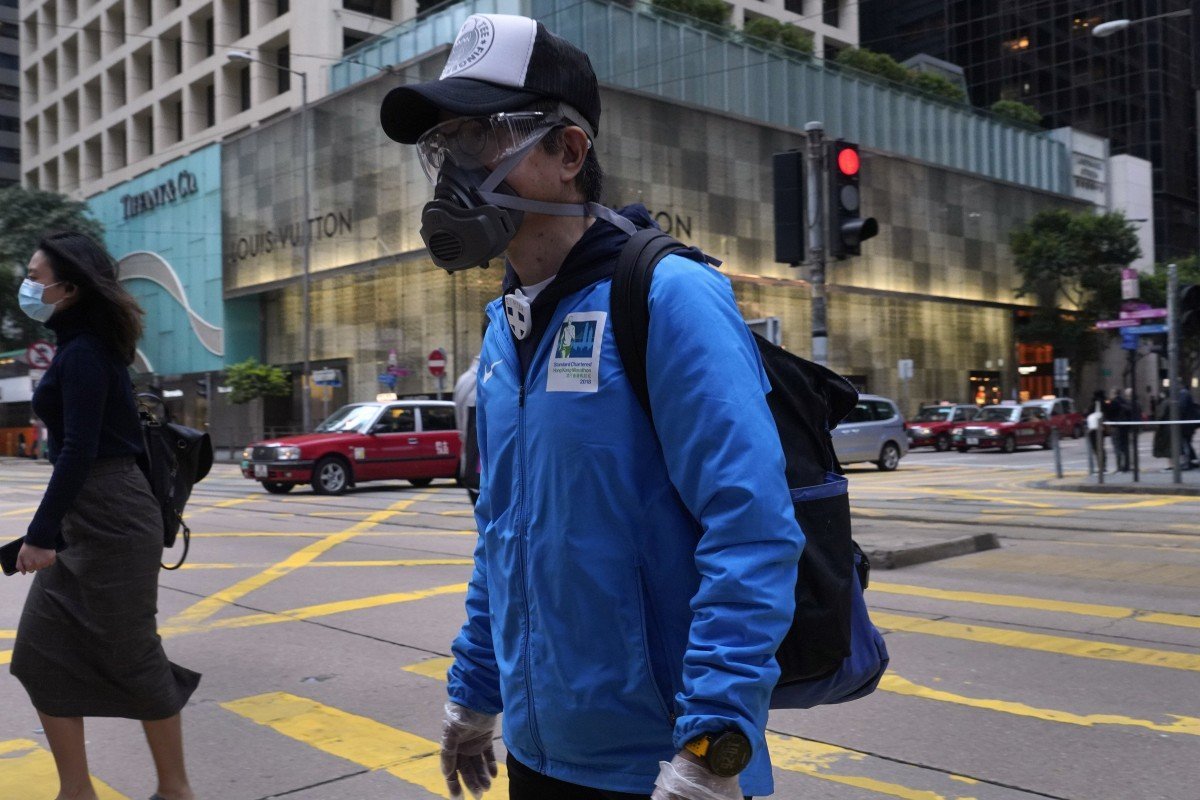 The aim of the extension is to completely cut off local transmission chains of the coronavirus, two sources say. City records four new Covid-19 infections on Friday, the sixth straight day with a single-digit increase, bringing total to 1,021

Hong Kong’s social-distancing rules to tackle Covid-19 are likely to be extended for another two weeks after the current deadline ends next Thursday, according to sources, although the government will consider reopening some outdoor recreational spots.

The aim of the extension was to completely cut off local transmission chains, two sources said on Friday.
Schools were also only likely to reopen after university entrance exams ended in late May.

These plans emerged as Hong Kong’s No 2 health official said there was a preliminary downward trend in coronavirus cases locally as the city recorded four new Covid-19 infections on Friday, the sixth straight day with just a single-digit increase, raising the city’s tally to 1,021.

In light of the lower figures in recent days, the government met with medical experts on Tuesday to discuss the direction of control measures but concluded that it was too early to decide on when to lift them, according to one source.

“The World Health Organisation suggests we need at least two incubation periods, meaning 28 days, free of local cases to be very safe,” the source said. “We have reached a single-digit number of cases for only six days and we appeal to the public to be patient.”

Social-distancing rules, including limiting public gatherings to four people and requiring restaurants to ensure a distance of 1.5 metres between tables, were first enforced in late March. The lockdown of 11 types of entertainment and leisure venues, including bars, karaoke, cinemas, gyms and saunas, was also likely to be extended.

“We have to be extremely careful especially as the university entrance examinations will be held from April 24, and that is the priority right now,” the source said, adding the government was of the view that schools would only resume after the Diploma of Secondary Education exams finished. The written exams finish on May 25.

But the source said that establishments not under mandatory closures such as outdoor recreational facilities and libraries might be reopened earlier.

The decision to maintain social-distancing rules would also affect the 14-day compulsory quarantine measures on arrivals from mainland China that were set to expire on May 7.

“The quarantine restrictions will only be reviewed after the social-distancing measures are lifted for a period of time, thus the current plan will be extended,” the source said.

The government has banned non-residents and transit passengers at the airport indefinitely since April 6, while returning residents must spend 14 days in isolation at home.

Dr David Hui Shu-cheong, a respiratory medicine expert at Chinese University, said he agreed with an extension, pointing to a recent example in Singapore.

“There could be hidden coronavirus cases. In Singapore’s case, it resulted in an outbreak in foreign workers’ dormitories. The public has to understand we need time to cut off the transmission chain,” he said, urging people to be patient.

Singapore’s Ministry of Health on Friday announced 623 new cases of Covid-19, with foreign workers in dormitories forming most new infections, raising the country’s total infections to 5,050.

Meanwhile, 48 patients were discharged locally in the past 24 hours, the highest number so far, health officials said, easing the pressure on hospital bed occupancy rates.

The small rise in new cases came a day after the city registered just one positive Covid-19 patient, heralded as “a good sign” by health experts, who still warned that continuing outbreaks overseas and the asymptomatic nature of the viral transmission meant there was no room for complacency.

Speaking at the city’s daily coronavirus briefing on Friday, Dr Chui Tak-yi, undersecretary for food and health, described the trend as a preliminary decline brought about by measures imposed and the cooperation of the public, but he struck a cautious tone about the contagion’s unpredictability and the “long battle” ahead.

He also attributed the success to a wider testing scheme the authorities had asked private doctors and hospitals to join. The private sector had collected 7,000 samples, 1.3 per cent of which turned out to be infected, and those patients accounted for 8 per cent of the 1,021 cases in the city, he said, while urging more doctors to take part.

Dr Chuang Shuk-kwan, head of the communicable disease branch of the Centre for Health Protection, said all four new cases had links to Britain and involved three females and a male, aged 13 to 55. Three are students.

Chuang noted that one patient, a 20-year-old student, only developed a headache after she had been quarantined in a hotel for 14 days, meaning she had an incubation period of more than three weeks, a week more than most health experts had expected.

But the communicable disease expert added: “We have had more than 1,000 cases so far. So it is foreseeable that some cases might have a longer incubation period.”

Chuang said the woman was more likely to be an imported case, albeit listed as “possibly local” because she had been outside after her quarantine period had expired.

Four people, including a friend, were listed as close contacts and would be placed in quarantine. She had also been to a supermarket and in Taikoo Shing.

She returned before compulsory testing was extended to all airport arrivals on April 9. Asked whether those returning earlier should now be tested, Chuang said it was impossible to test all 60,000 returnees who had been quarantined at home.

But she suggested that authorities were looking at testing high-risk groups, such as those returning from Europe and North America, or people who had just completed their isolation periods.

The other three new cases, who travelled on the same flight, tested positive when they were made to wait for their results at the AsiaWorld-Expo in Tung Chung.

One of them, a 55-year-old woman, developed a fever and lost her sense of taste while in Britain in early March. But the fever subsided two days later, and her sense of taste returned by the end of March. She tested positive after she landed in Hong Kong on Thursday. Chuang said she might have had the virus all along but never got tested until her return.

Dr Linda Yu Wai-ling, a chief manager of the Hospital Authority, said the occupancy rate for the city’s more than 1,000 isolation beds had dropped to about 50 per cent because of the high number of patients discharged.