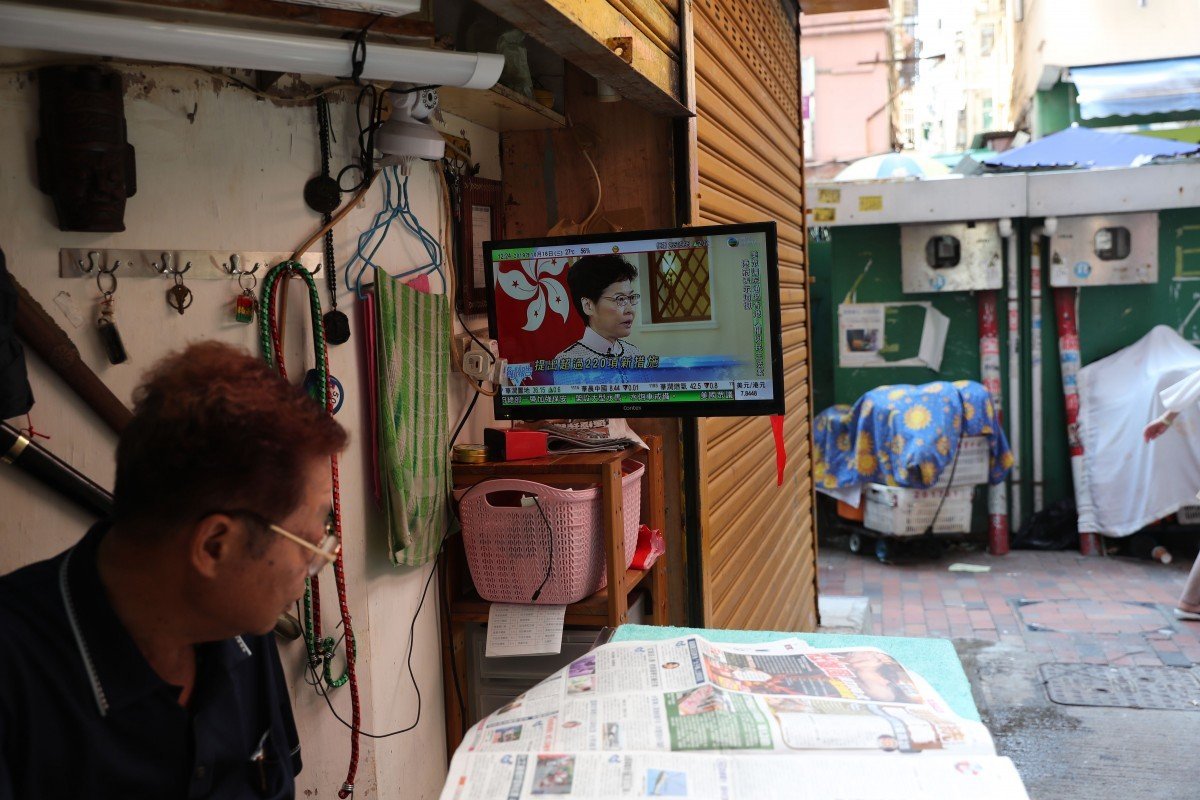 Forced to abandon her speech to Legco, chief executive reveals schemes to tap into Hongkongers’ home ownership aspirations in video address.The 200 initiatives, which include more subsidies for students and low-income households, will help city return to normal, Lam says.

For the first time in Hong Kong’s history, its leader’s policy address was delivered by video after heckling from opposition lawmakers forced Carrie Lam Cheng Yuet-ngor to abandon her speech in the legislature.

In her 51-minute television broadcast on Wednesday, the embattled leader admitted she faced unprecedented challenges, but said she hoped the policy address would set Hong Kong back on track and called on protesters and others to stop attacking each other.

But to nobody’s surprise, none of the measures addressed protesters’ demands for universal suffrage and an independent inquiry into police's alleged abuse of power. Instead, housing and economic measures were dominant.

1. Hong Kong on the brink

Lam put on a stern face in her opening remarks, saying Hong Kong was on the brink amid increasingly violent anti-government protests as she called on various parts of society to end the turmoil.

She said apart from supporting police against criminal behaviour, the government would invite community leaders, experts and academics to conduct an in-depth and independent examination of the social conflict engulfing Hong Kong and the deep-seated problems that must be addressed.

The 200 initiatives in this address, she said, would hopefully help Hong Kong return to normal.

But Lam also laid out some of her principles. She said while she vowed to safeguard human rights, promotion of Hong Kong independence could not be tolerated and the city’s governing system of “one country, two systems” was one of her red lines.

“Despite the stormy times and overwhelming difficulties Hong Kong is experiencing, I believe that so long as we accurately adhere to the principle of one country, two systems, we will be able to get out of the impasse.”

Noting that housing is the “toughest” livelihood issue and “a source of public grievances”, Lam announced a raft of measures to help low-income households and the middle classes buy their own homes.

One of her major policies is to build 10,000 transitional homes in the next three years for those on the waiting list for public housing, backed up with HK$5 billion of new funding.

On boosting land supply, Lam decided, as expected, to invoke the Lands Resumption Ordinance more proactively, an idea floated by the city’s pro-Beijing politicians and endorsed by state media, which urged Lam to get tough with developers who hoarded land for private gain.

The legislation enables the forceful resumption of private land for public purposes, such as housing.

Together with other sites, altogether 700 hectares of land have been or will be returned to the government.

She officially declared the economy had “already slipped into” a technical recession since the third quarter as gross domestic product shrank 0.5 per cent in the second quarter from the preceding one.

The unemployment rate in the most affected sectors such as retail, accommodation and catering services has been rising progressively in recent months.

To create more business opportunities, the Hong Kong government will seek policy support from mainland Chinese authorities on tax incentives and simplified procedures for companies seeking to expand across the border.

It will arrange overseas trade delegations composed of companies from Hong Kong and the mainland in Belt and Road economies.

The government would offer a “one-off living subsidy” for low-income households who were not living in public rental flats or receiving welfare, such as the Comprehensive Social Security Assistance (CSSA), Lam said.

This includes those who are on the queue for public housing.

Meanwhile, under the Public Transport Fare Subsidy Scheme, implemented this year, the subsidy rate for a commuter’s monthly public transport expenses that exceed HK$400 will increase from 25 per cent to about 33 per cent.

5. ‘Rainbow after the storm’

In her concluding remarks, Carrie Lam called on people across the political spectrum to put aside their differences and stop attacking each other.

The embattled leader was adamant that Hong Kong would soon be able to “emerge from the storm and embrace the rainbow”.
“What we can rely on now is the spirit of the rule of law, the freedom of expression and the unique advantage brought by the one country, two systems,” she said.

“I believe that the efforts made to lay the solid foundation of Hong Kong would not be wasted. So long as we have unwavering confidence, adhere to the one country, two systems principle, stop violence in accordance with the law and restore social order as early as possible, Hong Kong will soon be able to emerge from the storm and embrace the rainbow.”