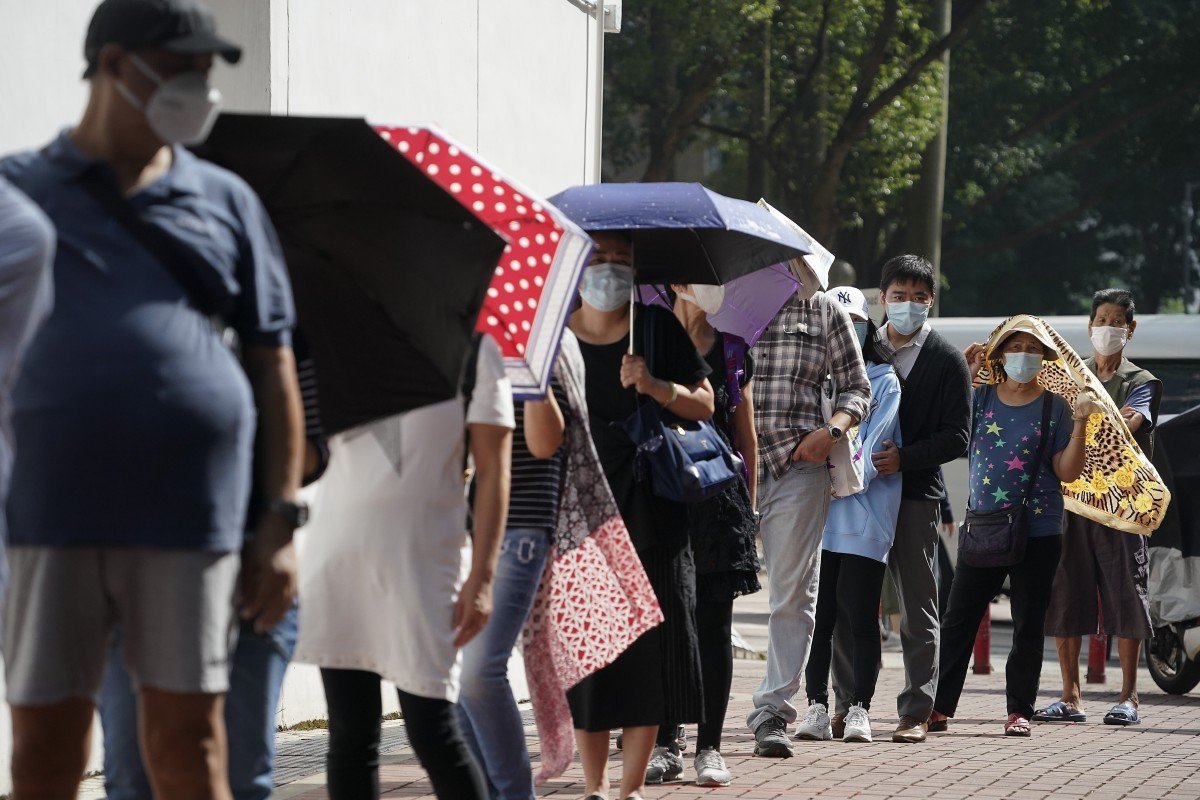 Hours after Chief Executive Carrie Lam Cheng Yuet-ngor set out the target in her annual policy address, the Centre for Health Protection revealed that of the newly confirmed cases, 63 were linked to a ballooning dance club cluster, bringing the total to 250 infections.

About 5,000 people linked to the cluster had already been tested, health officials said.

Sixteen local confirmed cases were untraceable – the highest recorded since August 8 – while one was imported from Britain.

“On breaking the virus transmission chain in the community, we mandate high-risk groups to undergo virus tests, and will provide voluntary virus testing service for people without symptoms on a wider scale, or may even implement large-scale universal community testing again in a bid to achieve the target of ‘zero transmission’,” Lam said in her address.

On whether such community testing would be mandatory, Lam told a subsequent press briefing that it would be more realistic and effective to conduct compulsory tests on targeted clusters or communities.

Mandatory testing on the whole population would require a month-long citywide lockdown, she added, something residents were unlikely to accept.

“Can Hong Kong survive a citywide lockdown for four weeks? Can you, as an individual, tolerate a stay-at-home mandatory order for four weeks?” she asked. “These are practical questions those advocating universal mandatory tests should try to answer.”

Giving an example, Lam said that if there was an outbreak involving 8,000 households of a public housing estate, the government would require all residents to conduct mandatory tests before allowing them to leave the estate.

She said the same principle applied if there was an outbreak at a terminal, where police would cordon off the area for mandatory testing of all personnel.

Lam added that Beijing had recently agreed to reserve a certain amount of vaccines developed or produced in mainland China for Hong Kong.

Hong Kong has been hit by a surge of new Covid-19 cases, driven by a cluster linked to more than 20 dancing venues across the city. On Monday last week, the city reported just eight new cases but that had risen to 68 on Sunday.

A seven-day closure of bars, nightclubs and bathhouses will come into force on Thursday. But dance studios can continue to operate despite the rising number of cases linked to the cluster.

The government told those who had visited any of 21 dance venues recently to get tested or face a maximum penalty of HK$25,000 and six months’ jail.

At a Covid-19 briefing on Wednesday, health officials said about 5,000 people connected to the clubs had been tested so far, though it remained unclear if they were all customers and staff or if some were family members.

Among Wednesday’s confirmed cases was a 21-month-old child, while the oldest was 89 years.

Also listed as a new patient and in the dance cluster was a 63-year-old obstetrician. He worked at a clinic in Mong Kok’s Argyle Centre and also at one in Ma On Shan under Union Hospital.

“The obstetrician wore proper protective gear at work, and so there’s a low chance he has infected other people. We’ll see how we can trace his contacts,” said Dr Chuang Shuk-kwan, head of the CHP’s communicable disease branch.

One of his close contacts was a student at Victoria Shanghai Academy, an international school in Aberdeen which has now suspended classes.

One woman was confirmed as infected after her 14-day home quarantine ended. She entered Hong Kong from the mainland via the Shenzhen Bay control point and lived with another person who was not under quarantine.

The 16 patients with untraceable infections lived and worked across the city, including in Tuen Mun, Causeway Bay, Fo Tan, To Kwa Wan and Discovery Bay.

“covid+19">Covid 19 is very infectious. It has spread quite fast recently in the city. If the situation goes on like this, we will see exponential growth. One person can pass the virus on to 10 people, and they can then infect 100 other people,” Chuang warned.

“But if people stay home and not go about outside, then you can infect only your family members. Of course, it’s not a good thing to infect your family but at least there won’t be a massive spread.”

On whether people should stop dancing, Chuang said any social activity that involved a lot of people could be high risk, including any kind of gathering.

Dr Leung Chi-chiu, a respiratory medicine specialist, said the epidemic would only be brought under control when measures were at their toughest.

He called for a citywide suspension of classes and work-from-home measures to help curb the spread of the coronavirus.

In another development, the Agriculture, Fisheries and Conservation Department said a poodle in Tsuen Wan had tested positive for Covid-19 but had no symptoms. The dog’s owner was a close contact of a confirmed patient.

The department stressed that there was no evidence to show pets played a role in the spread of Covid-19 among humans. Other pets have earlier been confirmed as infected.