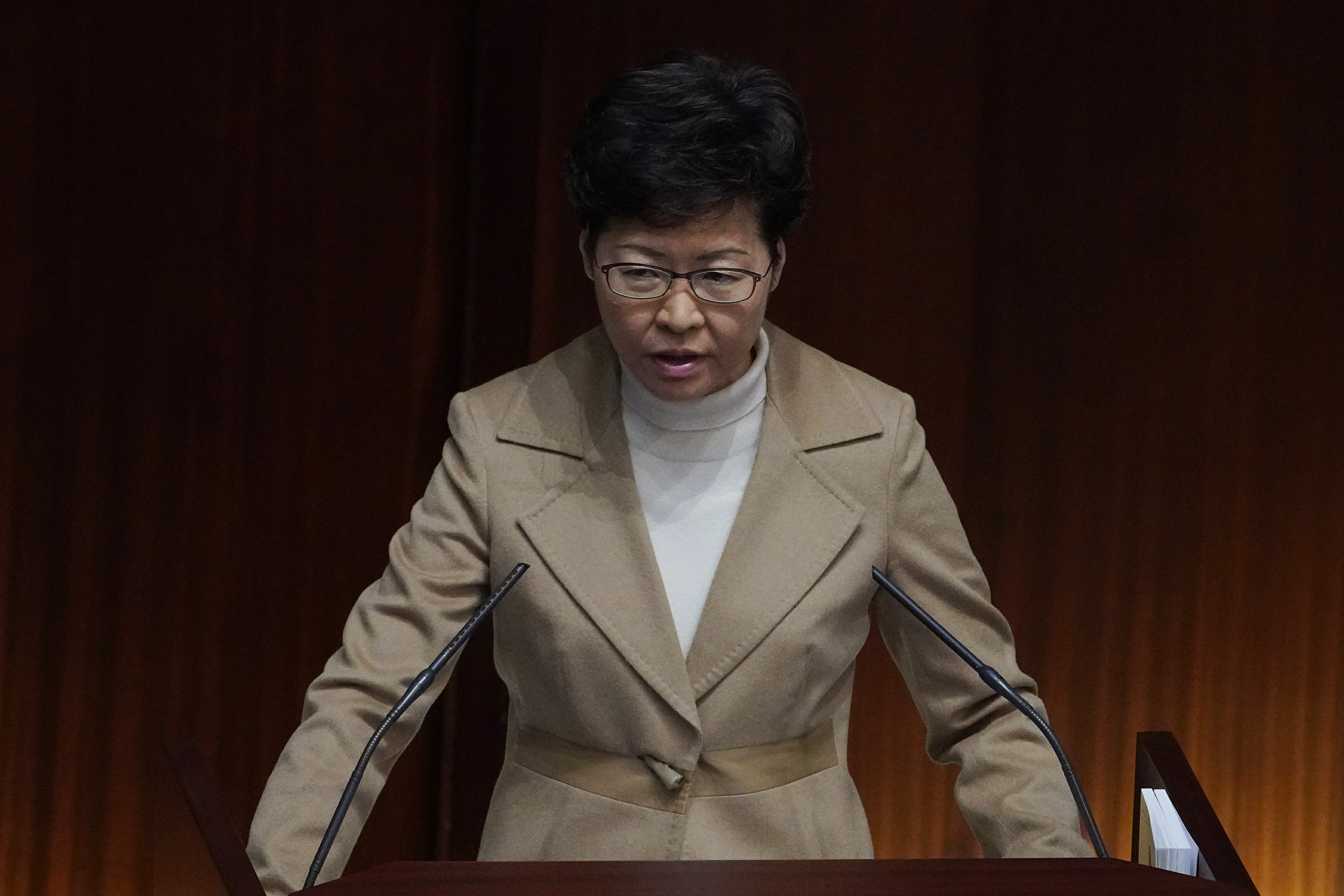 Hong Kong’s leader Carrie Lam said Thursday that the ″one country, two systems″ framework under which the city enjoys freedoms unknown in China could continue after a 2047 deadline if loyalty to Beijing is upheld.
Lam’s comments at the Legislative Council appeared to be an appeal to those in the city who see Beijing as tightening its control over the semi-autonomous territory’s civic, economic and political life.

Hong Kong has been wracked by often violent anti-government protests since June, although they have diminished considerably in scale following a landslide win by opposition candidates in races for district councilors late last year.

Hong Kong was handed over from British to Chinese rule in 1997 with a promise that it would maintain its own capitalist economy and Western-style institutions for 50 years.

“We have to uphold the principle of ‘One country.’ Only by doing this, can ‘one country, two systems’ be moving forward smoothly.”

Lam’s comments echo language from China’s Communist Party leaders, who say Hong Kong’s unique system is predicated on respect for Chinese sovereignty over the territory. Beijing routinely accuses political opponents in Hong Kong of seeking to split the territory from the mainland with the backing of foreign forces.

While it wasn’t clear whether Lam was speaking in her own right or under order or in coordination with Beijing, her comments had the feeling of a final warning to the people of Hong Kong that they “need to wear their loyalty to Beijing on their sleeves ... or else,” said Steve Tsang, director of the China Institute at London’s School of Oriental and African Studies.

Tsang pointed to the appointment of hard-liner Luo Huining as China’s top representative in Hong Kong as an indication of President Xi Jinping’s determination to end the protests, possibly through stepped-up repression. In that context, Lam’s statement may have been a last-ditch appeal to the opposition in hopes of avoiding more serious consequences, although its unlikely to have the desired effect, Tsang said.

“I would be very surprised if Lam’s warning would be heeded in Hong Kong,” Tsang said. “Instead it may well get the hardcore of the protesters annoyed.”

The pro-democracy protests were sparked by proposed legislation that could have seen suspects extradited to face trials seen as unfair and possible torture in China. While the legislation was eventually scrapped, the movement grew to adopt new demands, including calls for universal suffrage and an independent investigation into police conduct.

While Lam has rejected those points, she said Thursday she hoped to announce next month the formation of a committee to look into the root causes of the unrest. Academics, experts and social leaders have been recruited to the Independent Review Committee, although some are reportedly reluctant to join out of fear of personal attacks or online harassment if their personal information is leaked by opponents.

Along with political concerns, the skyrocketing cost of housing and increased economic competition from mainland China are believed to have fueled the protests.

During the contentious legislative session, Lam repeatedly defended police action as angry lawmakers demanded to know why her government isn’t responding to public demand for an independent investigation into alleged police brutality during the protests.

She said that police were merely performing their duty to maintain public order and had deployed “minimal force.” The government says complaints against police are being handled by the force’s own investigative division.

At one point, a lawmaker asked Lam, a practicing Catholic, whether she was afraid of going to hell. When she dodged the question in her reply, he asked her “When are you going to die?”