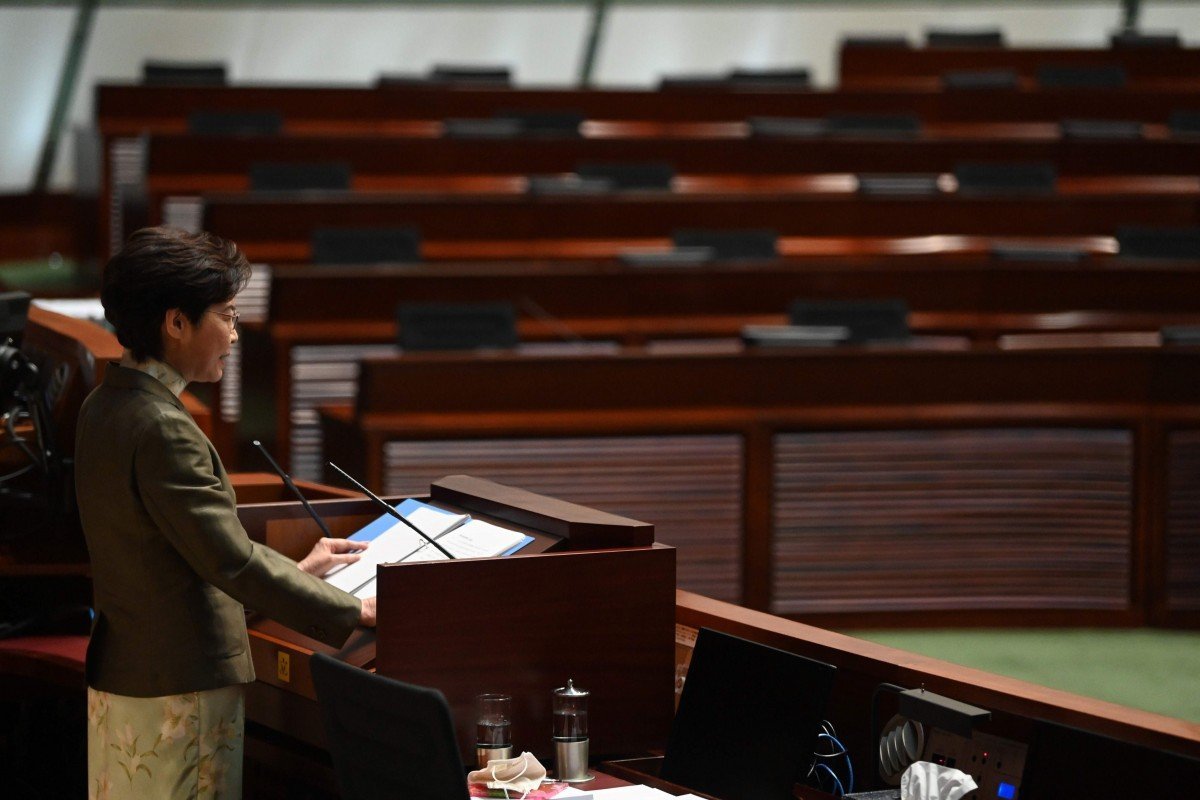 Carrie Lam says changes will be made to oath-taking laws to align them with Beijing’s recent resolution that led to unseating of opposition legislators.

All Hong Kong lawmakers who failed to fulfil their oath of allegiance and uphold the Basic Law will be dealt with by legislative amendments to be tabled next month, Chief Executive Carrie Lam Cheng Yuet-ngor revealed in her annual policy address on Wednesday.

In a speech heavily focused on politics, Lam said one of the city’s most urgent priorities is to restore its constitutional order and political system after the chaos of the previous year, as she set out identifying new measures to accomplish that goal.

Apart from lawmakers, Lam said all civil servants will be required “in due course” to sign a declaration pledging to uphold the Basic Law, the city’s mini-constitution, a requirement already made compulsory for those who joined the public service before July this year. 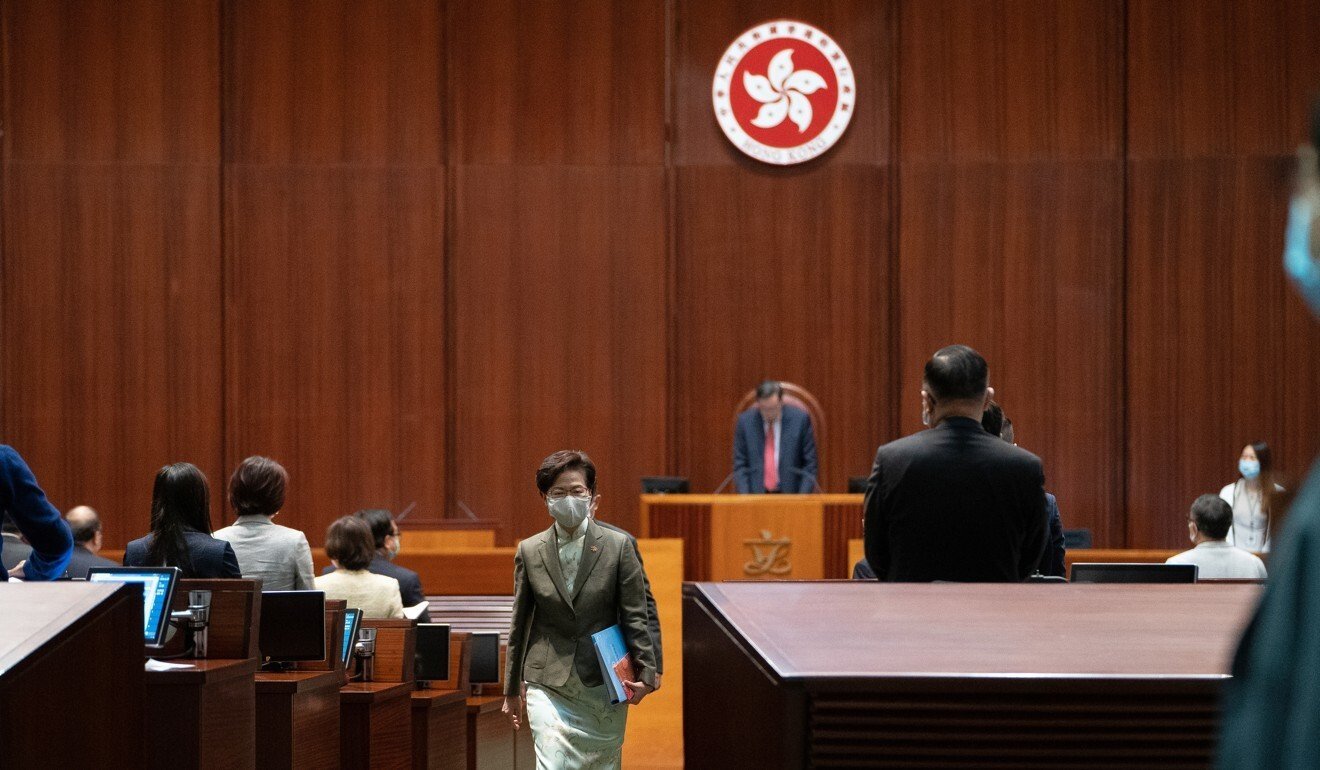 “The taking of the oath is a legal pledge made by public officers to the People’s Republic of China and the Hong Kong Special Administrative Region, and is legally binding,” she stressed in her speech at the Legislative Council.

Lam also outlined plans to boost moral and national education in the city, suggesting that changes were in the works for liberal studies, a secondary school subject that pro-establishment supporters had long accused of fuelling student anger against the government and the nation.

“The direction of reform in future should focus on rectifying the previous deviation from the subject’s objectives, and reinstating it as the platform to help students … learn about the development of our nation, the constitution, the Basic Law, the rule of law and so forth,” she said, without specifying the exact changes.

These steps, she suggested, were needed because there was still a lack of basic understanding within society about the political system. Some issues were being “politically manipulated” owing to an inadequate understanding of the country’s constitution, the Basic Law and “the fact that some people’s awareness of the ‘one country’ principle has yet to be enhanced”.

“In addition, ill-intentioned people influenced by external forces have made use of the relatively complicated social and political situation in Hong Kong to deliberately mislead the public about the relationship between the central government and the HKSAR,” she said.

“In the past year or so, Hong Kong has experienced the most severe political challenges since its return to the motherland. One of our urgent priorities is to restore the HKSAR’s constitutional order and political system from chaos.”

Lam also addressed her role as chief executive, saying not only was she the leader of her government but also the head of a region responsible to Beijing. She reiterated that Hong Kong enjoyed an independent judiciary, a question that has been fiercely debated in recent months.

But Lam also revealed that while stringent policing was required to safeguard the rule of law, the force was ready to be lenient to underage protesters.

“For arrestees under the age of 18 who have expressed contrition and are not involved in serious offences, police are prepared to consider handling the cases with measures conducive to their rehabilitation,” she said. “For example, by cautioning them under the Police Superintendent’s Discretion Scheme or imposing bind over orders.”

Lam noted police had cautioned 19 protesters out of 2,370 charged and revealed that nearly half of the 4,000 students among the roughly 10,000 arrested during the protests were in primary or secondary school.

But student activist Isaac Cheng Ka-long, from Education Breakthrough, expressed concern over reforms to liberal studies, fearing the topic would be changed to reflect only the official viewpoint.

Cheng said the protests were sparked by Lam’s own miscalculation in introducing the now-withdrawn extradition bill and questioned the sincerity of her intention to mend divisions in society. “There shouldn’t be any prosecutions in the first place,” he said.

Lam’s announcement on the legislative amendment came two weeks after the National People’s Congress Standing Committee, Beijing’s top legislative body, issued a resolution on the loyalty of lawmakers that led to the disqualification of four members of the opposition. The remaining 15 opposition lawmakers declared they would resign in protest.

Lam noted that anyone convicted under the national security law that Beijing imposed on Hong Kong in June this year would be disqualified from holding public office.

In issuing the resolution, the central government was making clear its disapproval for those who advocated independence, refused to recognise Beijing’s sovereignty over Hong Kong or solicited intervention by foreign governments, Lam said.

Her government was required to align relevant local laws, such as the Oaths and Declarations Ordinance and the Legislative Council Ordinance.

“[The bill will] enhance the oath-taking arrangements and deal with those who have engaged in conduct that breaches the oath after swearing-in,” she said.

The Democratic Party’s Lam Cheuk-ting said Beijing wanted only lawmakers who were willing to operate within its confines, which could shift at any time.

“It’s a political signal fired by Beijing through her,” he said.

A government source said authorities were still studying who would be responsible for administering the oath-taking process, whether it would be the chief executive or an appointed person.

The amendment would specify a person would be disqualified if he or she violated the oath after taking office and might consider whether a jail sentence was warranted, the insider said.

Officials were also considering whether the arrangement should be extended to the district councils, where the opposition camp holds most of the 452 seats.

Despite Lam’s strong focus on politics, a controversial proposal to allow Hongkongers living in mainland China to vote in the city’s elections without having to return, was notably absent from the blueprint.

Lam only said the government would introduce bills to enhance the city’s electoral system and arrangements, without giving further details.

A government source said no timetable existed for completing a study on mainland voting, as officials would first need to discuss the logistics with mainland authorities.

“We have studied the possibility of using the postal services, but as there are risks of missing votes, and the fairness of such an option, we may not proceed with this idea,” the insider said.

The chances that Donald Trump will remain a free man after today is almost zero, regardless of any evidence or wrong-doing. Whatever is his final decision, President Trump has o...