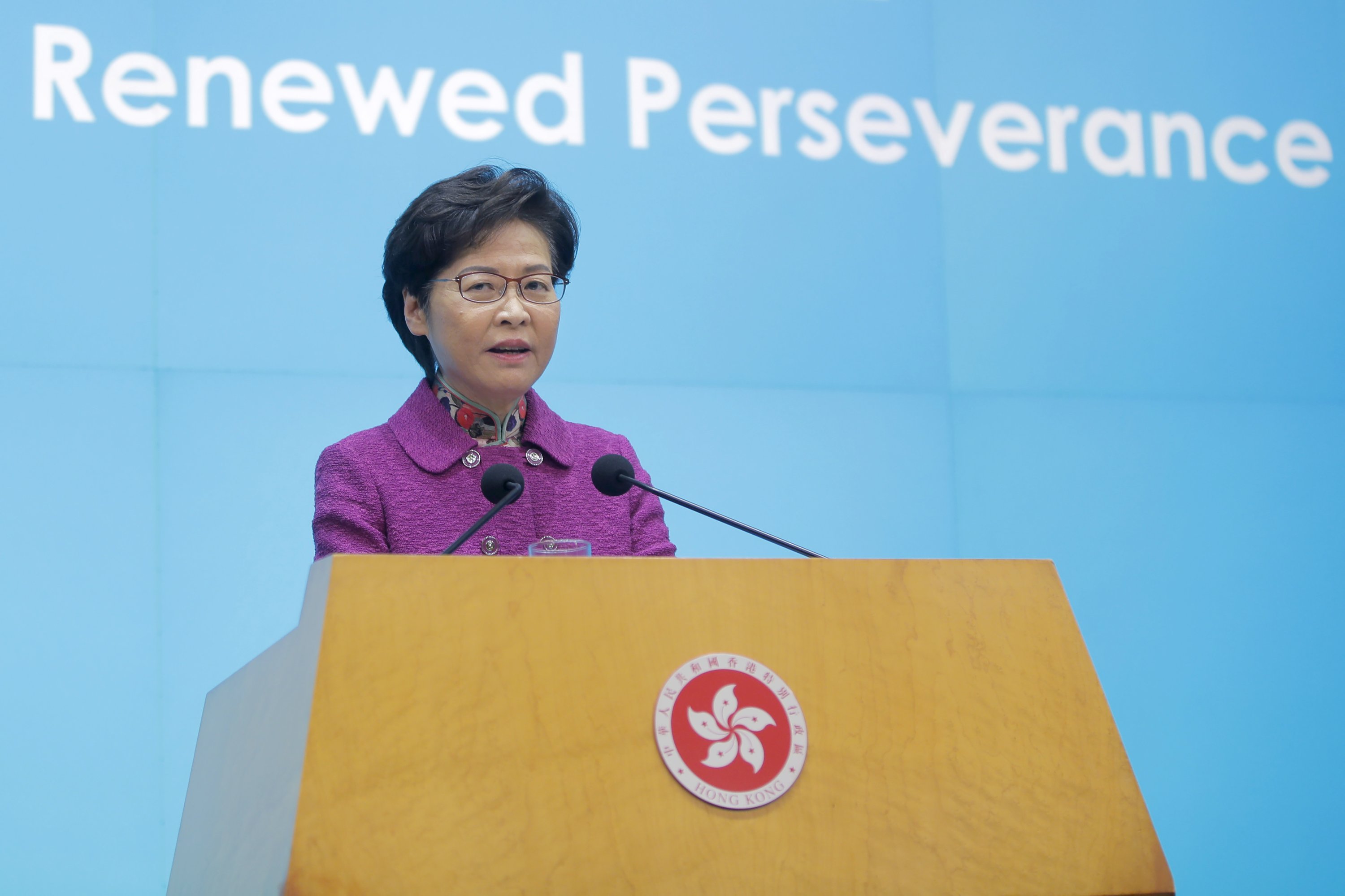 Hong Kong leader Carrie Lam lauded the city’s new national security law on Wednesday as “remarkably effective in restoring stability,” despite criticism that it is severely narrowing the space for free speech and political opposition in the semi-autonomous Chinese territory.
Lam said in her annual policy address that the law had prevented a return of political unrest and that bringing normalcy back to the political system is an urgent priority.

Beijing imposed the security law on Hong Kong in June, aiming to crack down on dissent following months of anti-government protests in the city that at times descended into violence. Last year’s protests were triggered by a proposed extradition law that would have allowed suspects in Hong Kong to be sent to the mainland. The proposal was eventually scrapped.

“Advocacies of Hong Kong independence and collusions with external forces have progressively subsided, some of the prominent figures have kept a low profile, radical organizations have ceased operations or dissolved,” Lam said in her address.

“After a year of social unrest with fear for personal safety, Hong Kong people can once again enjoy their basic rights and freedoms, according to the law,” she added.

The security law’s passage has drawn strong criticism among rights groups and foreign governments, who say it betrays China’s promise under the “one country, two systems” framework to allow Hong Kong to maintain its own legal system and civil liberties for 50 years following the handover from British to Chinese control in 1997.

They point to the curtailing of free speech through the outlawing of statements advocating Hong Kong’s independence and criticism of China, the pulling of books from public libraries with suspect political views and a new emphasis on “patriotic education” in schools.

The U.S. responded to the new law by targeting a number of Chinese and Hong Kong officials responsible for implementing the legislation with travel bans and financial sanctions, Lam among them, and by moving to reduce Hong Kong’s special status with the imposition of higher tariffs and visa restrictions.

The U.S. and a number of other countries also suspended their extradition treaties with Hong Kong, while Britain said it would allow holders of British National (Overseas) passports extended stays and a path to citizenship. Taiwan opened an office to help Hong Kongers interested in moving to the island.

Beijing has rejected all such actions and criticisms as brazen political interference and taken an ever-tougher stance on dissent in Hong Kong.

Earlier this month, China passed a resolution disqualifying four pro-democracy Hong Kong lawmakers after they were accused of violating their oaths of office. The move prompted all of Hong Kong’s pro-democracy legislators to resign en masse as a show of solidarity.

Lam said Wednesday that Hong Kong has experienced one of its most severe political challenges over the past year.

“One of our urgent priorities is to restore Hong Kong’s constitutional order and political system from chaos,” she said.

She said the government would introduce a bill by the end of this year to amend local laws related to oath-taking, to “deal with those who have engaged in conduct that breaches the oath of the swearing-in.”

Lam’s address had been postponed for more than a month so she could seek Beijing’s support for various economic measures aimed at reviving Hong Kong’s economy.

A leader of pro-democracy legislators in Hong Kong, Wu Chi-wai, criticized Lam’s policy address, saying it was “taking Hong Kong people to a wrong direction” with policies including greater co-operation with China in areas such as finance, aviation and technology.

“She bet the future of Hong Kong on the Greater Bay Area and the mainland economy. It will ruin the international city of Hong Kong,” Wu said. “We cannot and should not ... put all our eggs on one particular economic territory.”

Wu and other remaining pro-democracy legislators are expected to officially step down from their positions by Dec. 1.
Add Comment