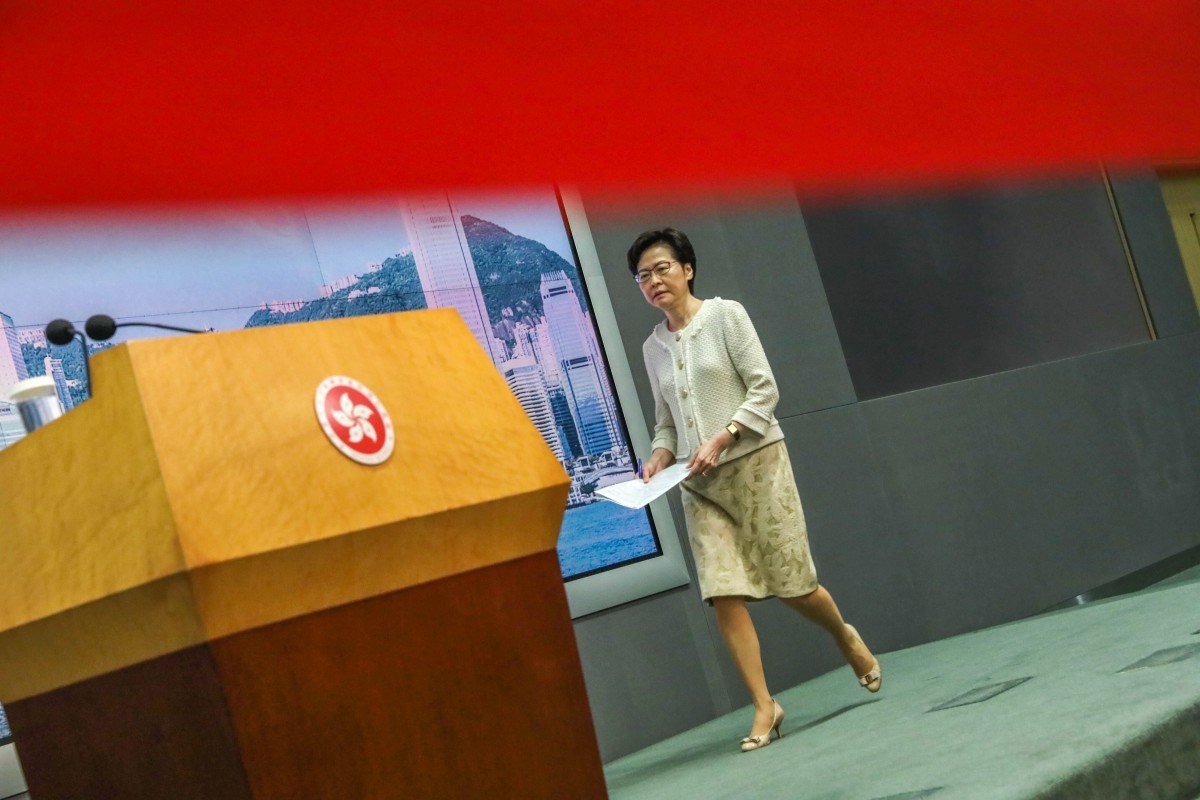 Chief executive says some of her comments were ‘misrepresented’ and accuses critics of exaggerating. Lam also says ‘respect and preservation’ of human rights a fundamental principle of new legislation

Hong Kong’s leader has said she was not kept in the dark as Beijing imposed the national security law on the city, and central government officials had briefed her and sought her opinion on the legislation.

On Tuesday, Chief Executive Carrie Lam Cheng Yuet-ngor also said the police’s power was not expanded under a series of new implementation rules laid down by the government the day before.

Under the new rules, Hong Kong police can raid premises without a court warrant, order internet firms to remove content or seize relevant devices, and demand information from political groups operating outside the city.

But at a 45-minute press conference on Tuesday, Lam said the law had been misrepresented as being draconian and undermining “one country, two systems”, the principle under which the city is governed.

She also said the notion Hong Kong officials were kept in the dark before it was enacted was wrong.

Rather than enlarging police power, the implementation rules were meant to limit such powers in law enforcement, Lam said.

“Apart from the powers under the current ordinance, Article 43 of the new law already empowered the police to adopt seven measures in safeguarding national security,” she said. “If we do not write down these implementation rules, the police’s power and measures would be almost absolute.

“It was exactly because we felt we need to protect and respect human rights, that we created the implementation rules … to stipulate under what circumstance could the measures be adopted, and who can approve it.”

Countering those who said the legislation was draconian, Lam said it was “relatively mild” compared with similar laws in some other countries.

“I have not seen widespread fears among Hong Kong people in the past week,” she said. “The national security law will restore stability, and help ensure the majority of Hong Kong people would exercise their rights and freedoms without being intimidated or attacked.”

The chief executive was asked if Hong Kong’s civil liberties, including press freedom, would be undermined by the new rules.

“I hope you will be assured that in the fundamental principles of this particular piece of legislation, Article 4, the respect and preservation of human rights is one of the guiding principles, and I will just explain that even the implementation details, they are designed and devised in order to protect and respect human rights,” she said.

Lam earlier dismissed suggestions that Beijing officials had kept her in the dark.

“The National People’s Congress Standing Committee has listened to opinions, including that of myself and the city’s government,” she said.

Lam believes remarks she made two weeks ago fuelled the misrepresentation of her relationship with Beijing over the drafting of the new law.

“I answered a question here, and [the reporter] assumed that I know nothing and said, ‘you guys have not seen the law’,” she said

“I only answered that at the moment, ‘we have not seen the complete details of the proposed legislation’. This was used to suggest that I know nothing about the law, and have not seen any provision until the law was passed on June 30.

“This was really far from what I meant, and [those critics’] ability to imagine and exaggerate things really impressed me.”

On one country, two systems, Lam said allegations were made that the law “signifies the death” of the principle, or put it in jeopardy.

“The answer from me is exactly the opposite. The national security law aims to affirm and improve the implementation of one country, two systems by addressing risks of undermining national security,” she said.

Asked to comment on London’s offer, Lam said she believed Beijing would “respond and handle [the situation] seriously”, but had no information on what action the central government might take.