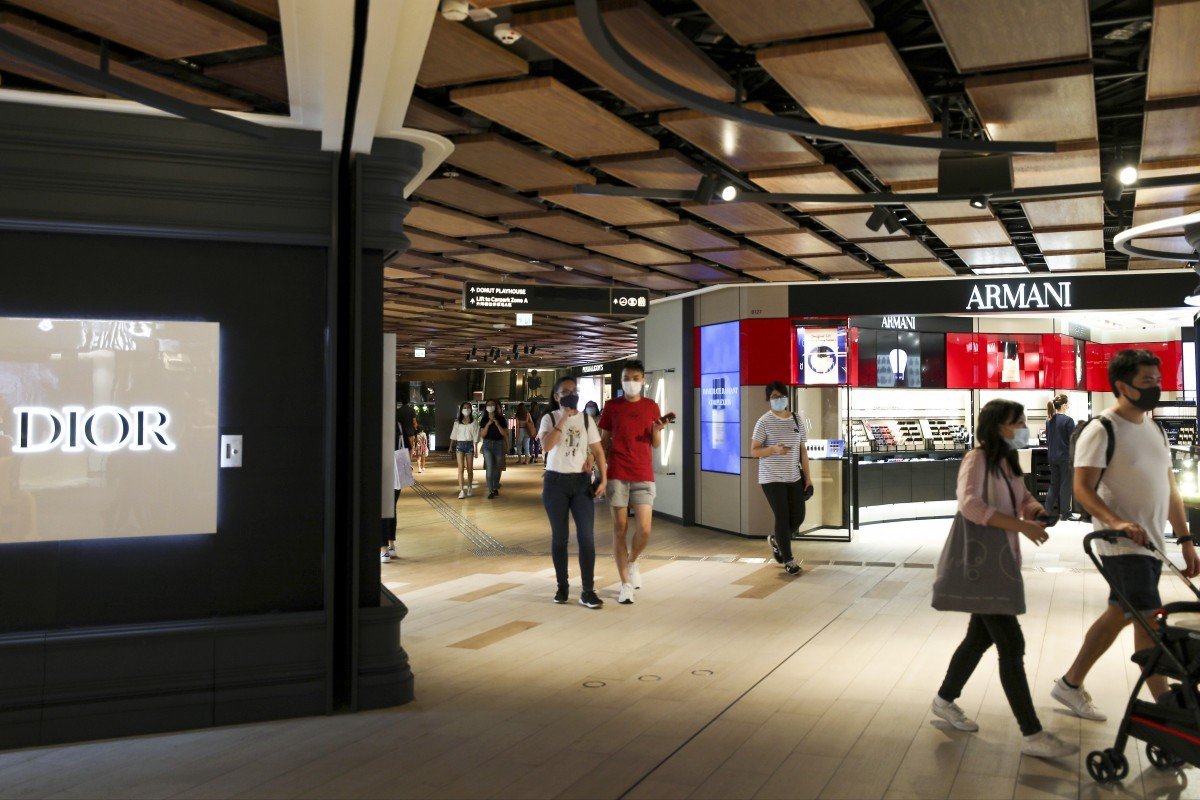 It’s too early to tell if promotions are enough to get shoppers back to spending money at shopping centres, analysts said, as remaining social-distancing rules and the absence of visitors from mainland China will limit any windfall that Hong Kong’s retailers might reap after the toughest curbs since the outbreak of the coronavirus at the start of the year.

Hong Kong’s shopping centres are rolling out various promotions and discounts to attract shoppers back, as city authorities begin a gradual process to relax some of their social-distancing rules amid positive signs that the spread of the infectious Covid-19 disease is easing.

New World Development’s K11 Musea, Swire Properties’ Pacific Place, Cityplaza and Citygate have all launched various promotions to lure shoppers. At the Pacific Place in Admiralty, customers can enjoy up to 15 per cent rebate when shopping on weekends until October 4, with accumulated same-day spending of at least HK$5,000 (US$645).

At the Cityplaza in Taikoo Shing, shoppers who spend at least HK$800 can redeem a HK$100 coupon for food and beverages. On the other side of the Victoria Harbour, K11 Musea will give out HK$1,000 e-vouchers for every HK$5,000 spent until September 27.

It’s too early to tell if promotions are enough to get shoppers back to spending money at shopping centres, analysts said, as remaining social-distancing rules and the absence of visitors from mainland China will limit any windfall that Hong Kong’s retailers might reap after the toughest curbs since the outbreak of the coronavirus at the start of the year.

“Being able to go to restaurants in a group of four people until 10pm rather than 6pm is more interesting and more fun for everyone, so there definitely will be good traffic and an improvement, but not to the level that retailers need for business to return to normal,” said Pascal Martin, partner at OC&C Strategy Consultants. “It’s still far from that.”

Beginning on September 11, museums, mahjong parlours, ice-skating rinks, as well as most indoor and outdoor sport facilities were allowed to reopen for business. The 50 per cent cap on number of diners in restaurants, however, will continue to hobble the struggling restaurant industry in the city.

“We expect a mild rebound in domestic spending with an easing of social distancing measures. People have stayed at home for a long period of time and it is no surprise that retail market sentiment improves when limits on group gatherings at restaurants are relaxed to four people and people are more willing to dine in and go shopping at physical stores,” said Lawrence Wan, CBRE Hong Kong’s senior director, advisory and transaction services in retail. 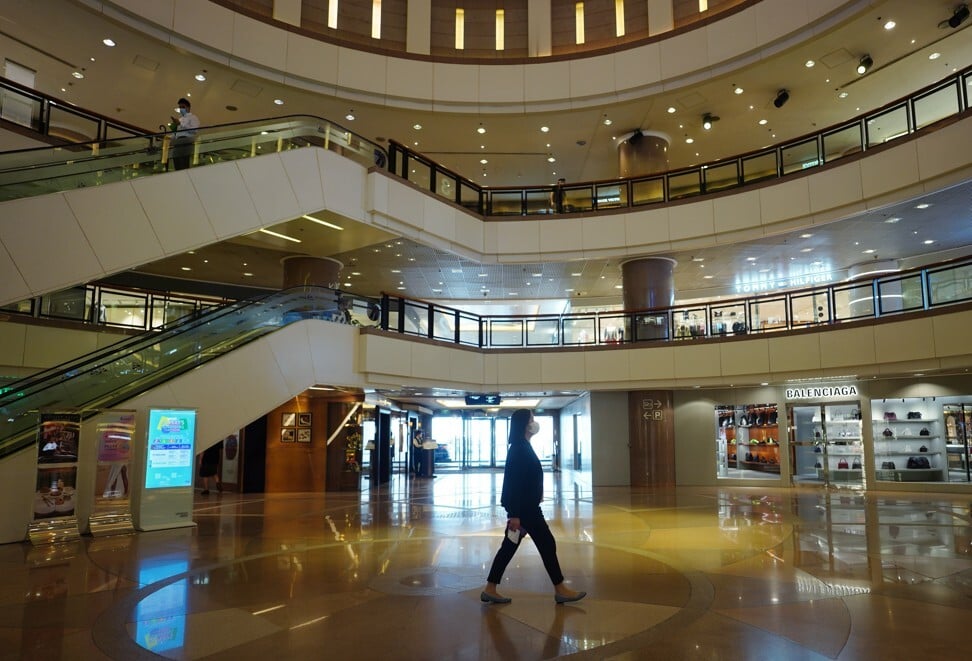 “However, the relaxed environment might be of limited help to F&B tenants since the official occupancy rate of F&B outlets remains at 50 per cent.”

Hong Kong’s retail and food and beverage sectors had been reeling from the impact of an unprecedented social unrest that began in the second half of 2019 and that tipped the economy to shrink 1.2 per cent for the full year, the city’s first recession in a decade.

This year is shaping up to be worse for the industry, as the Covid-19 pandemic first reported in the Hubei provincial capital of Wuhan spread everywhere, prompting local authorities to close borders and impose curbs to stem the spread of the disease.

While the measures were generally successful to contain the infection, they also stopped the inbound flow of tourists from mainland China, traditionally the bloodstream of Hong Kong retailers. Shoppers seen at K11 Musea in Tsim Sha Tsui amid the third wave of coronavirus infections on 12 September 2020.

Shopping centres that cater to the domestic market appear to be doing better than those focused on the tourists market. K11 Musea, which shares over 3 million square feet (278,700 square metres) of space with K11 Artus, K11 Atelier and the Rosewood Hong Kong hotel, said its second-quarter sales had risen by 35 per cent from the previous quarter and expects a 60 per cent increase in the third quarter.

“It‘s not 100 per cent back to normal, but we are seeing revenge consumption, and we are optimistic that our focus on the domestic market and our online channels are helping us weather the downturn,” a K11 Musea spokesperson said.

A visit to the mall on Saturday showed queues for restaurants and people visiting cosmetics and clothes shops. The shopping centre has arranged for a series of lucky draws comprising 300 prizes worth over HK$1.3 million starting on September 18 until 20. 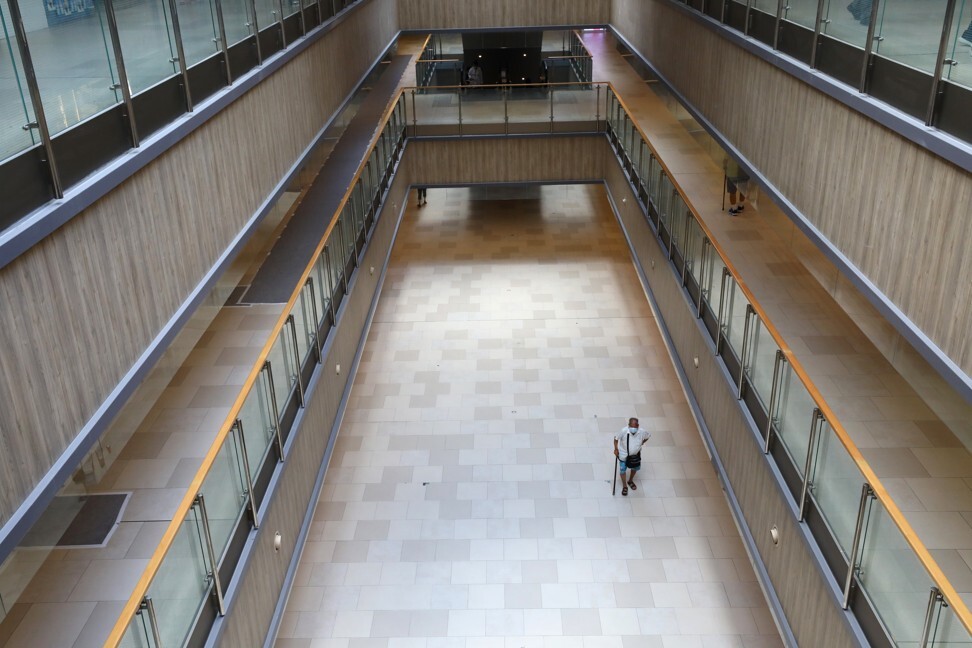 An elderly man in a face mask walks alone in a deserted shopping centre in Tsz Wan Shan amid the third wave of coronavirus infections on 14 August 2020.

The latest retail and F&B sales bore out the tough conditions that businesses have to operate in. July retail sales shrank 23.1 per cent to HK$26.5 billion (US$3.42 billion) from a year ago. In the first seven months of the year, sales declined by 32.1 per cent.

Restaurant sales declined 25.9 per cent to HK$21.2 billion in the second quarter from a year ago.

The catering sector suffered an estimated loss of HK$5 billion in July revenue, and HK$6.5 billion in August, while about a quarter of the city‘s bars had already shut for good, according to Simon Wong Ka-wo, president of the Hong Kong Federation of Restaurants and Related Trades.

While restaurants are facing tough conditions, retailers of luxury items are likely to even fare worse for the rest of the year.

“Luxury items like watch and jewellery, cosmetics and fashion are still under pressure, unless and until the borders can completely open to welcome tourists and business travellers from the mainland and other countries,” said Kevin Lam, executive director, head of retail services, Hong Kong, Cushman & Wakefield.