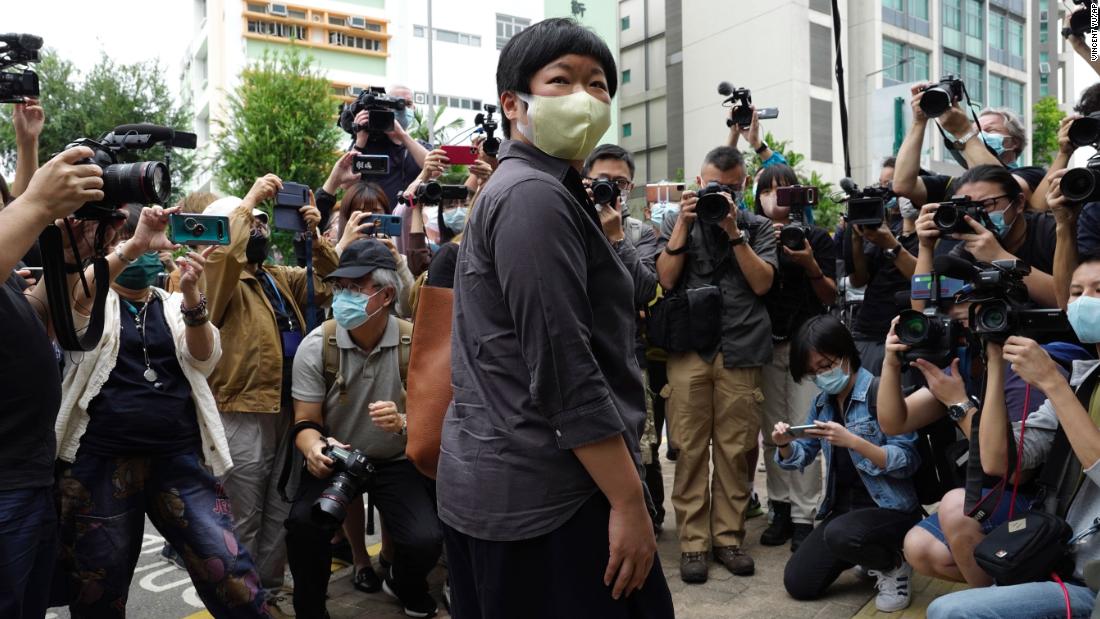 An award-winning Hong Kong journalist appeared in court Tuesday, on charges related to her role in helping to investigate alleged police mishandling of a violent mob attack on democracy supporters in 2019.

The case has intensified concerns over shrinking press freedoms in the semi-autonomous Chinese city, as authorities continue to crackdown on prominent figures linked to last year's anti-government protest movement.

Bao Choy, an employee of the public broadcaster Radio Television Hong Kong (RTHK), was arrested last week in connection with data on vehicle registrations she used for an investigative documentary.

Footage of the attack posted on social media showed masked men, wearing white T-shirts and armed with batons and metal rods, blindly attacking unarmed crowds on the platform and inside train carriages in the far northwest of Hong Kong.

At the time of the Yuen Long incident, Hong Kong police were widely criticized for their slow response, and protesters accused law enforcement officials of working with the gangs -- a charge the police repeatedly denied.

At Fanling Magistrates Court on Tuesday, Choy, 37, was charged with two counts of making false statements under the Road Traffic Ordinance, over her attempts to obtain publicly available drivers information as part of the investigation.

During the course of the RTHK investigation, reporters sifted through CCTV footage from the night of the attack and identified several vehicles parked close to the suspected gang members. Using a registration database they then obtained information about the owners of those vehicles and contacted them for comment.

According to a charge sheet, Bao made false statements when seeking access to the data.

Speaking outside the court Tuesday, Choy told reporters that "many scholars, unions and lawyers are concerned whether the police are using the law to suppress press freedom in Hong Kong."

She said her case raised concerns about "whether journalists will still be free to obtain public information in the future," and urged the government to listen to the voice and opinion of society.

Choy's case has been adjourned until January 14, while police finish their investigation. If found guilty, Choy could face six months' imprisonment and a fine of up to HK$5,000 ($645).

In a statement, the Hong Kong Journalists Association said that checking publicly accessible databases -- such as vehicle registration marks -- was a "common investigative tool" employed by journalists in Hong Kong, and has been crucial in helping reporters uncover important stories such as electoral fraud and illegal construction.

"We are extremely shocked and infuriated by police's unreasonable and ridiculous move," it said. "Police have abused the Road Traffic Ordinance in suppressing normal reporting activities, and this is set to damage press freedom."

The case comes as Hong Kong pro-democracy opposition legislators raise concerns that Beijing is cracking down on genuine political opposition in the city, following the imposition of a new national security law on June 30.

The wide-reaching law, which was imposed on Hong Kong without public consultation, criminalizes secession, subversion, terrorism, and collusion with foreign powers, and many fear it is being used to override existing legal processes and erode the city's civil and political freedoms.

On Monday, pro-democracy lawmakers threatened to resign en masse over reports that Beijing could seek to have them removed. RTHK reported that Beijing could unseat at least four lawmakers in the coming days for violating Hong Kong's mini-constitution, the Basic Law, by filibustering meetings.

China's parliament, the National People's Congress, is scheduled to hold a standing committee meeting this week, but it has not made any announcements concerning the report on its official website.

"We'd like to make use of the mass resignation to reflect our unity, and on the other hand, protest against the tyranny of the central government and the (Hong Kong) government," said Wu Chi-wai, chairman of the Democratic Party, the largest pro-democracy party in Hong Kong's legislature.

Dennis Kwok, a pro-democracy lawmaker reported to be among those marked for disqualification according to RTHK, said if the news turns out to be true, it will show that Beijing could no longer "tolerate opposition" in Hong Kong and that it will be a "serious departure from the original spirit of One Country, Two Systems" -- the framework that allows Hong Kong greater autonomy from the mainland.

In July, 12 pro-democracy candidates, including Kwok, were barred from standing in now-postponed legislative elections on the grounds that they would not uphold the Basic Law.

On Tuesday, the US State Department imposed sanctions on four Chinese officials over their role in implementing the national security law in Hong Kong.

The State Department identified the four officials as Li Jiangzhou, deputy director of the Office for Safeguarding National Security -- established by the Chinese central government in Hong Kong under the new law -- Edwina Lau, head of the National Security Division of the Hong Kong Police Force, and Steve Li Kwai-Wah, senior superintendent of that division. It also designated Deng Zhonghua, the deputy director of mainland China's Hong Kong and Macau Affairs Office.

"These individuals will be barred from traveling to the United States and their assets within the jurisdiction of the United States or in the possession or control of US persons will be blocked," US Secretary of State Mike Pompeo said. "These actions underscore US resolve to hold accountable key figures that are actively eviscerating the freedoms of the people of Hong Kong and undermining Hong Kong's autonomy."

Following the US announcement, Hong Kong's acting chief executive hit out at "barbaric interference" from the US State Department.

Cheung said it was "incumbent on Hong Kong people to safeguard national security."

"We are not going to be intimidated by any of these actions. In fact, this is clearly breaching international practice, apart from international law," he said.

In August, the United States sanctioned Lam and 10 others for their role in crackdowns on political freedom in the region, escalating tensions between Washington and Beijing. In retaliation, China imposed sanctions on 11 Americans, including Senators Marco Rubio of Florida, Ted Cruz of Texas, for "behaving badly on Hong Kong-related issues."