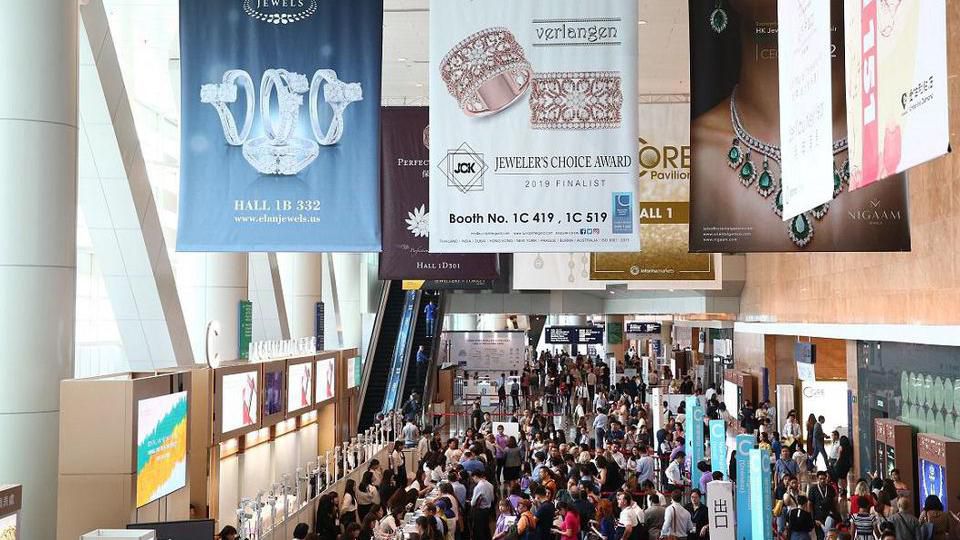 Jewellery & Gem World Hong Kong is the latest to fall victim to the global coronavirus pandemic that has caused dozens of jewelry fairs to either cancel its 2020 events or move to all-digital formats.
Jewellery & Gem World Hong Kong (JGW) will cancel its live event and move to an all-digital format October 27 – 29. Informa Markets, which owns and operates the fair, made the announcement Tuesday.

Previously known as the September Hong Kong Jewellery & Gem Fair, considered to be the world’s largest jewelry fair, it is the latest to fall victim to the global coronavirus pandemic that has caused dozens of jewelry fairs to either cancel its 2020 events or move to all-digital formats. The Hong Kong show will make its return in September 2021, where it will be held both live and online, Informa Markets said in a statement.

JGW is one of two jewelry fairs held in Hong Kong by Informa Markets, which took over the jewelry events in 2018 when it acquired UBM Asia. The other jewelry fair is Jewelry & Gem Asia Hong Kong (formerly the June Hong Kong Jewellery & Gem Fair). Being near the center of the coronavirus outbreak in China caused special hardships for the two fairs.

The September fair (which attracted nearly 40,000 visitors in 2019) was originally scheduled for September 13 – 19 at two venues: the AsiaWorld-Expo for loose precious materials and the Hong Kong Convention & Exhibition Centre for finished jewelry.

Because of the pandemic the fair was moved to November 9 – 13 and combined to one venue, prior to its cancellation.

Meanwhile, the June fair was moved to September and then canceled when a government-instituted a travel ban was extended to mid-September.

“Our overriding priority has always been to provide our stakeholders with a safe, secure and the highest-quality sourcing experience possible, which is simply not feasible given the current circumstances,” David Bondi, senior VP of Informa Markets in Asia, said in a statement. “New challenges, however, afforded us new opportunities to work for creative solutions that will bring our community together in a new way — Jewellery & Gem Digital World.”

The first edition of the online fair will include a series of virtual events anchored in digital product meetings enhanced by custom digital catalogues, assortment management solutions and personalized showroom technology, which will endure beyond the Covid-19 crisis, the organizers said.

New online initiatives include an Asian jewelry industry webinar series and an online gemstone education program, will be launched prior to the virtual show.

An important part of the annual September fair is the hosting of the JNA Awards, which is usually held in a gala setting attended by hundreds of jewelry industry professionals. This year award recipients will be announced in a virtual presentation on October 27.

The program awards best business practices by honoring companies and individuals that demonstrate outstanding leadership, innovative thinking, and sustainable and socially responsible strategies. This year, the event is open to registered participants of J&G Digital World and the JNA Awards.

More details of the digital fair and the JNA Awards will be announced at a later date, Informa Markets said.

In recent years the September Hong Kong fair has seen more than its share of challenges, all of it beyond the control of Informa Markets. Typhoon Mangkhut in 2018, considered one of the largest storms to ever hit Hong Kong, caused the show to close for a day for the first time in its long history.

In 2019, the violent protests and a U.S.-China trade war combined to make an even more difficult environment for the fair. While attendance at the fair in 2019 was nearly 40,000, it was down 26% from the prior year.

Even before the virus outbreak, jewelry and watch trade shows were undergoing radical change due to myriad business disruptions and an unwillingness of many exhibitors and buyers to pay increasingly higher prices to attend these fairs, particularly the larger events.

In response there have been buyouts, name changes and conceptual changes to several jewelry trade shows during the past two years. Then the coronavirus hit causing travel and business to ground to a halt, and governments to close their countries. Other jewelry show casualties in 2020 include:

* GemGenève, an exclusive international fair for dealers and collectors of important gems and vintage jewels. After moving the dates of the fair twice, the organizers called it quits a few days ago.

* Baselworld (now called Houruniverse), at one time the world’s largest watch and jewelry fair, first announced that its April show in Basel, Switzerland, would move to January 2021, before major exhibitor defections caused the show to not only be canceled but to possibly close for good. Show organizers, MCH, issued a press release late July promising to unveil a new concept behind the name change in late August. However, the announcement has yet to appear.

* JCK Las Vegas, the largest jewelry show in North America, scheduled for late May and early June in Las Vegas. This show went to an all-digital format in August.

* Couture Show, an exclusive international gathering for luxury and designer jewelry and watches in Las Vegas, was scheduled for late May-early June.

* International Jewelry London (IJL), the largest jewlry trade show in the U.K., scheduled for June. In addition, its organizer, Reed Exhibitions, has canceled the 2021 event, which has led to speculation that the fair will not return.

* OroArezzo jewelry trade fair in Arezzo, Italy, originally scheduled for April, was postponed to July before moving to an all-digital format.

* IIJS Premiere Show, the largest jewelry trade fair in India, held in Mumbai, was scheduled to be held in August.

* The Bangkok Gems & Jewellery Fair, the largest jewelry trade fair in Thailand, was scheduled for September.