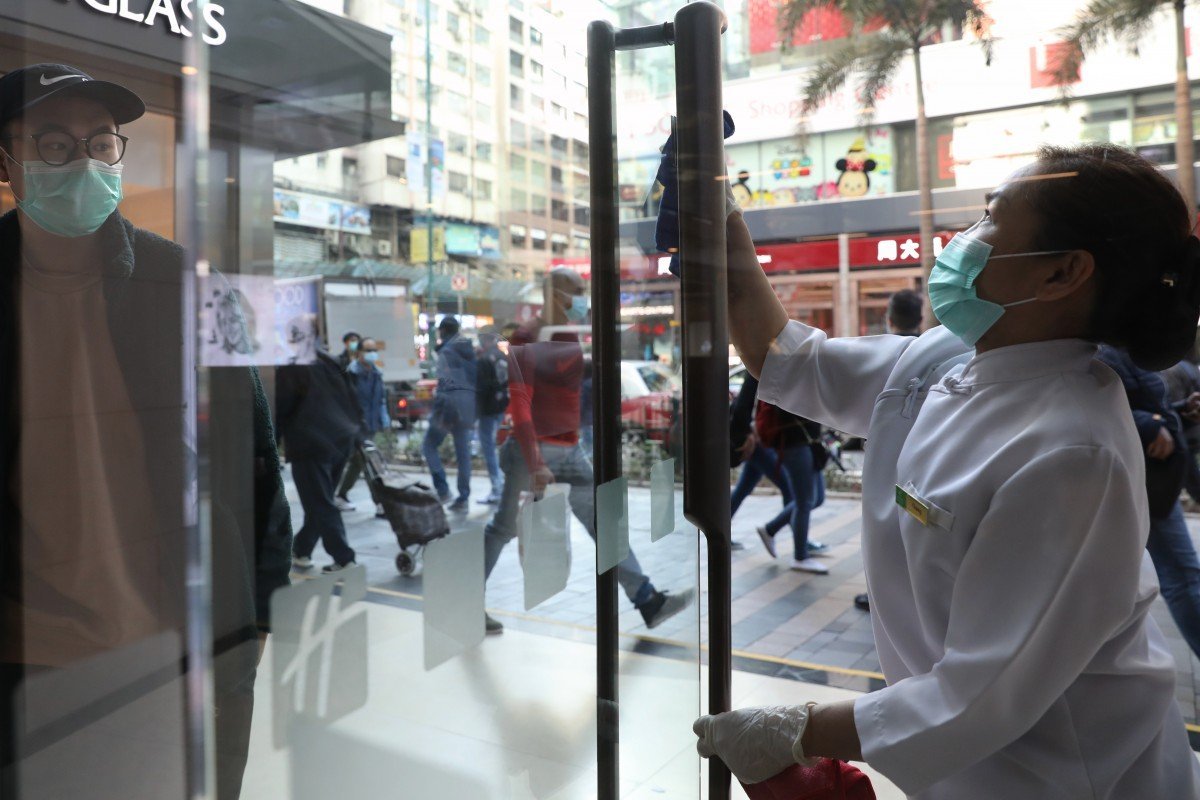 New workers’ union threatens strike action if industry does not act to stop further spread of deadly outbreak. Security Bureau earlier revealed that 15 travellers from Hubei province were staying in city hotels
Hotels in Hong Kong are coming under increasing pressure from unions and the public to turn away guests from mainland China.

On Thursday, local authorities revealed they had found 15 travellers visiting from Hubei province, the epicentre of the deadly coronavirus outbreak, staying in city hotels.

The Security Bureau said officers from the Immigration Department had recorded the visitors’ personal information during a search of 110 hotels on Wednesday night, but as none of them showed any signs of being infected, did not take any further action.

Hong Kong’s hotels have become yet another focal point as the virus continues to spread, reaching nearly 8,000 cases globally on Thursday. The virus has claimed almost 200 lives in China, where most of the infected people live, and there were 11 confirmed cases in Hong Kong as of Thursday evening.

The Four Seasons Hotel in the city turned away two guests from Hubei on Tuesday and reported them to police. The elderly couple became the city’s ninth and tenth confirmed cases.

On Thursday, the Hong Kong Hotel Employees Union, a new union representing more than 300 hospitality sector workers, demanded a more vigorous response from the industry, and threatened industrial action next week if their demands were not met.

The list of demands included: temporarily banning Hubei visitors from local hotels, mandatory temperature screening for guests, and turning away those with a fever, sufficient protective gear including surgical masks, alcoholic hand sanitisers and gloves for staff, and 14-day self-isolation leave with pay for workers who had come into contact with people who were infected.

“Hospitality is a high-risk sector, since we are on the absolute front line of meeting and greeting visitors who may carry the virus,” Alex Tsui, the union’s president, said.

“Bear in mind the Sars outbreak in Hong Kong in 2003 originated in a hotel, that is why we need full protection for hotel workers to hold the line against a community outbreak.”

Some hotels in Hong Kong, including the Metropark Hotel in Mong Kok, have told the Post they will turn away guests from the province, while many others in the city’s main tourist districts have stepped up prevention measures.

Hand sanitisers were clearly available at valet counters and reception desks at several hotels in Tsim Sha Tsui, while one hotel was requiring temperature checks for all people entering the building.

One cleaner at the 621-room Holiday Inn Golden Mile hotel, who wore a face mask and gloves, said she was tasked with wiping down doors every one or two hours.

“If there are more people, then I will wipe more frequently,” said the cleaner.

Two doormen, wearing two face masks each, at the Oasis Avenue hotel on Prat Avenue carried digital thermometers and only allowed guests to enter after reading their temperatures.

The hotel was also the only one that had posted a sign reminding guests to wear surgical masks and notifying them they would be turned away if they had “abnormal body temperature”, or did not wear masks.

The Post also saw a valet at the five-star New World Millennium Hotel carrying a large bottle of hand sanitiser and instructing guests who had just exited taxis and buses to clean their hands before entering the hotel.

The hotel said it had implemented a range of measures, including health declaration forms for all guests, and temperature checks for guests and staff members. It has no guests from Hubei, and would refer those with a fever to local doctors.

Despite the more stringent measures taken by some hotels, other hotels in Tsim Sha Tsui did not appear to have taken any extra steps besides all staff wearing face masks.

Meanwhile, the Travel Industry Council said at least 3,340 Hong Kong tour groups expected to leave the city for mainland China between January 24 and February 29 had been cancelled, affecting more than 116,000 people.

Its executive director, Alice Chan Cheung Lok-yee, said the policy implemented by some agencies only applied to tours which were expected to depart by Friday.

Hong Kong’s largest tour group operators, Hong Thai Travel and Wing On Travel, said all mainland tours were scrapped in February for the safety of staff and customers. Customers could choose to shift to other tours, keep their booking for six months, or seek a refund.

On January 24, the council said about 2,600 tours to the mainland between January 25 and mid-February had been cancelled, affecting more than 91,000 people and involving about 20 agencies.
Add Comment