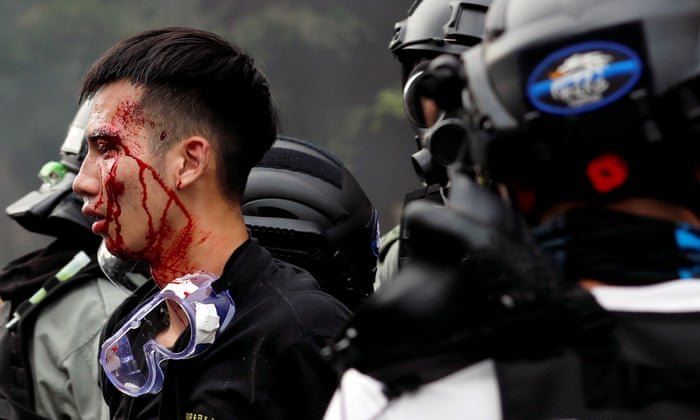 The Guardian: Hong Kong has declared war against its young people

I witnessed the determined solidarity of the protesters, even while police stormed their university campus, says Avery Ng, chair of Hong Kong’s League of Social Democrats party
Over the weekend, defiant young activists in Hong Kong demonstrated their capacity to look after themselves in the campus of Polytechnic University. I was there, and witnessed how the students worked together to build brick barricades, took over the canteen to feed hundreds and set up first-aid stations. This all amid a heavy police presence, and occasional volleys of tear gas and rubber bullets.

Then, on Sunday night, the police laid siege to the campus, saying everyone inside would be arrested for rioting – a serious offence punishable by 10 years in prison. The pro-democracy movement in Hong Kong has been in force since the summer, but the renewed anger is in response to the tragic death on 8 November of Chow Tsz-lok, a 22-year-old computer science student who fell from a car park during chaotic confrontations with the police.

Many protesters hold the police responsible. They called for a city-wide general strike on 11 November. Students at the Chinese University of Hong Kong and the Polytechnic blocked major roads for days before moving to the universities, which until recently were considered safe ground for protesters. But the police have been ruthless, employing lethal tactics including the use of live ammunition.

At the same time, the government seems to be in no hurry to restore “order” to the city’s infrastructure or to unblock the occupied roads. It’s hardly a coincidence, I think, that this relative inaction is happening before the district council elections this Sunday, which many were planning to use as a referendum on the government itself. Pro-democracy candidates are looking to make gains over the pro-establishment camp. The Hong Kong chief executive, Carrie Lam, has hinted that the government could delay the elections because of the protests. This is deeply worrying given the already dire state of political freedoms in Hong Kong.

Another worrying development is that, over the weekend, soldiers of the Chinese People’s Liberation Army “volunteered” to leave their base in Kowloon to help clean up the roadblocks near a university. This could be a violation of the Basic Law – which doesn’t allow PLA interference with Hong Kong affairs unless requested – and is a blatant signal from Beijing that military intervention is a possibility.

Polling suggests that the movement still enjoys significant support among Hong Kongers. However, the government continues to refuse permission for mass peaceful protests. Rather than answering the movement’s call for an independent commission into police violence and a restart of the political reform process, the government is adding fuel to the fire. It has in effect declared war against the young.

At the time of writing, the police are storming the Polytechnic campus and making arrests. The situation is grave. But the students appear to be unwilling to give up their hopes for this beautiful but imperilled city.
Source
Add Comment