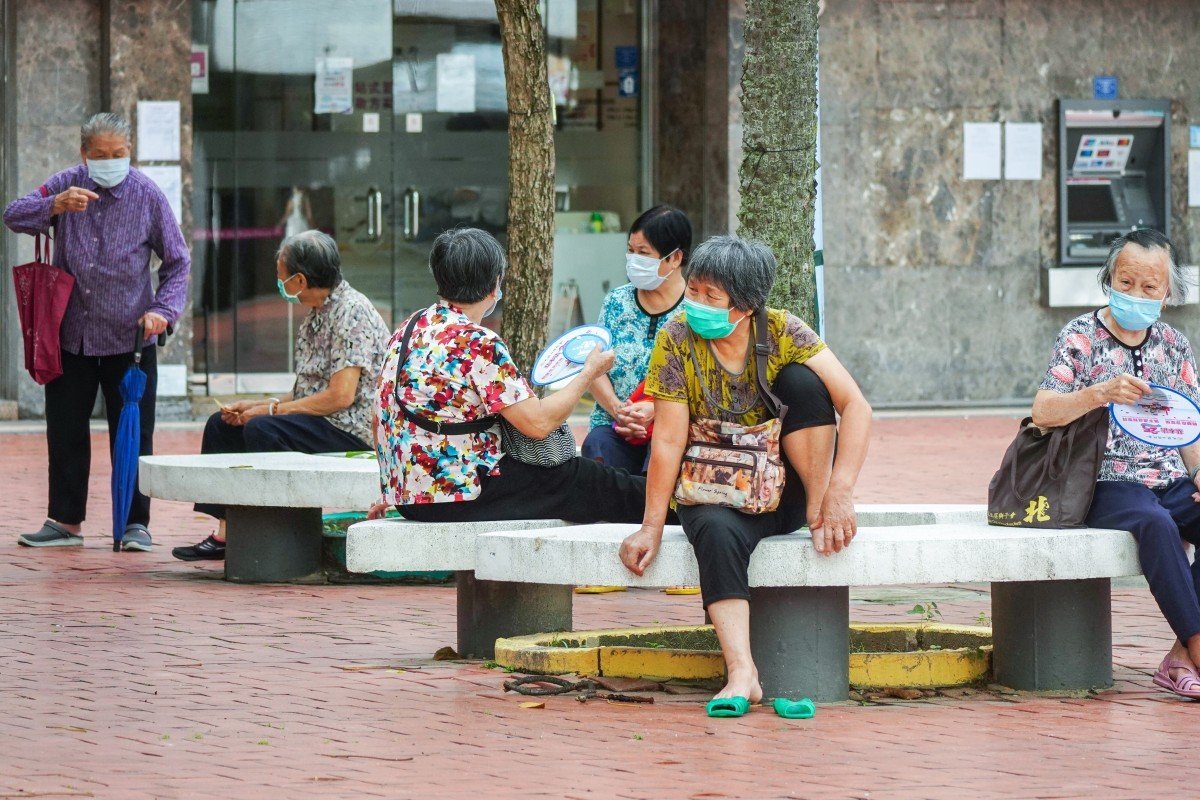 Hong Kong’s third wave of Covid-19 continued to show signs of slowing down as the city marked a week of recording only double-digit daily increases to its infected tally, with health authorities on Sunday confirming 72 new cases and five more deaths.

The latest figures took the city’s coronavirus case total to 4,079, with 52 related deaths, but the tally looks set to rise further as about 40 others tested preliminary positive, including a patient who only returned such a reading on his third screening, as well as a police officer potentially in contact with scores of colleagues.

The city last month witnessed an extended run of 100-plus new cases per day, prompting the Hong Kong government to introduce its toughest social-distancing measures to date, before advancing plans this week for mass Covid-19 testing, which one expert suggested on Sunday should be rolled out under citywide lockdown.

“Unless a curfew is imposed to keep all those tested indoors, to wait for the whole population’s screening to be complete, it would be difficult to prevent reinfection,” president of the Hong Kong Medical Association Dr Gabriel Choi Kin told a radio programme.

Among the new infections, 63 were locally transmitted and the origins of 24 of those had not been traced yet.

Dr Chuang Shuk-kwan, head of the centre for health protection’s communicable disease branch, told a press conference that as many as 170 police officers would have to be tested if an officer from the police tactical unit (PTU) who tested preliminary positive for the virus was later confirmed to be infected.

She said of those 170 colleagues the 23-year-old trained with on the PTU base in Fanling, he might have shared facilities such as changing rooms with about 40 of them, who would have to be isolated.

The force said the patient had no contact with the public in his official duties.

In another alarming development, the Hospital Authority announced that a 70-year-old patient at Kwong Wah Hospital had tested preliminarily positive after two negative results. The man was first admitted to the hospital on August 3 before returning the initially positive reading on Saturday.

Eight patients, one already discharged, had shared hospital wards with the 70-year-old.

Dr Lau Ka-hin, the authority’s chief manager for quality and standards, said several factors, such as having a low viral count during the disease’s incubation period, and sampling problems, could have explained the previous negative results.

A 75-year-old man at the same hospital, who was considered a close contact of another infected patient, has also tested preliminarily positive. 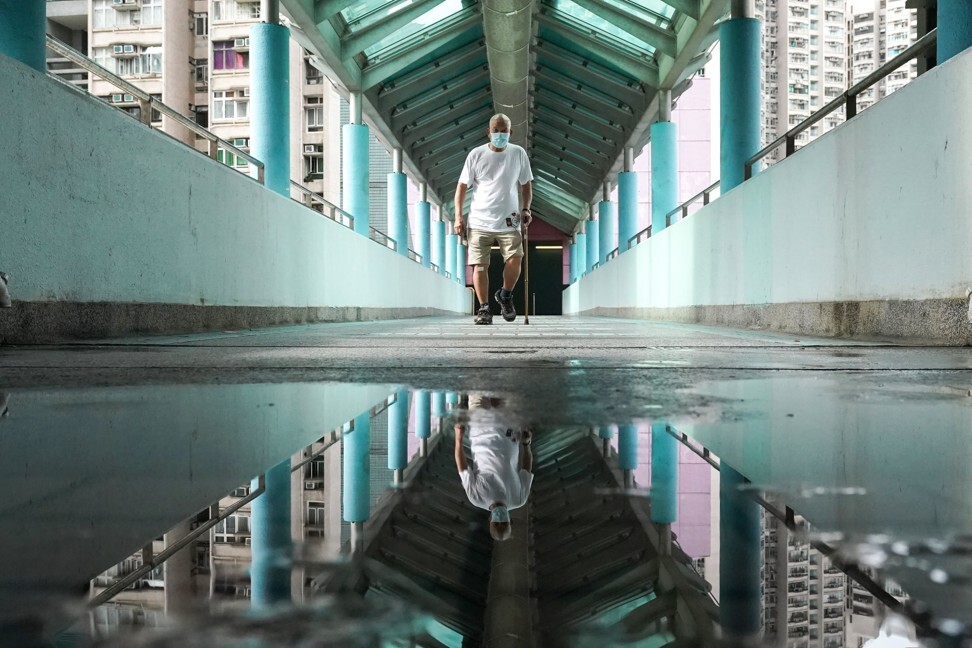 Hong Kong’s third wave of Covid-19 is ongoing but the daily toll is not as large as was typical last month. Photo: Felix Wong

Nine of Sunday’s cases were imported, including six people from a cargo vessel arriving in Hong Kong from Malaysia.

Chuang said four seamen from the Philippines and one from Ukraine tested negative for Covid-19 when they boarded the ship in Hong Kong last month, and no crew changes were made when the vessel sailed to Singapore on July 21 and Malaysia on July 26, before returning to the city. “It’s really hard to say what the source of the outbreak is,” she said.

Some local clusters continued to grow on Sunday, with a cargo driver at Kwai Chung Container Terminal catching the virus, leaving health officials worried the toilets and changing rooms there might be possible routes of transmission. The site now has five confirmed cases and one preliminary.

Elsewhere, two residents were confirmed as infected and another tested positive at the Hong Kong Society for the Aged Kai Yip Home for The Elderly in Kowloon Bay, where a case was previously recorded.

“There might be an outbreak at this elderly home and thus all of the senior citizens there, about 40 of them, have been considered close contacts of the infected and may have to be quarantined,” Chuang said, adding employees there must be quarantined as well.

The city also saw the infection of a third domestic helper living in agency-arranged accommodation while seeking work.

Chuang said the Indonesian national was staying with David Cheung Employment Agency Limited on Heung Wo Street in Tsuen Wan on July 23 and stayed with four other maids there, who had all subsequently tested negative but will undergo quarantine along with company staff.

The Leisure and Cultural Services Department said on Sunday it had given 5,000 verbal warnings to groups of domestic helpers over the weekend for violating the public-gathering limit.

In patrols targeting those breaking the Covid-19 rules, police on Sunday issued 11 tickets for gathering in groups of more than two, while six more were handed to people failing to wear masks in public.

Meanwhile, the city’s biggest free-to-air broadcaster, TVB, said a director from its entertainment news channel had caught the virus. The employee worked on site last Monday and Wednesday, and about 30 colleagues will now be tested.

The 78-year-old woman was the seventh resident from the Cornwall Elderly’s Home (Golden Branch) in Tuen Mun to die. All five had chronic illnesses, and their situations had worsened since they were admitted to hospital.

Sources said on Sunday that within the next few days, air arrivals would be tested for Covid-19 at the airport’s midfield concourse area on the departure level, rather than at AsiaWorld-Expo, which the government is expanding for community quarantine.

On Friday, the government announced that every Hong Kong resident would be eligible for one free coronavirus test in a massive voluntary programme starting in two weeks with the help of medical experts from mainland China.

The tests would be conducted by three mainland-linked laboratories – BGI, Kingmed and Hong Kong Molecular.

Anthony Wu Ting-yuk, a director of Sunrise Diagnostic Centre that is under BGI, said on Sunday that the equipment in his labs in Hong Kong would be ready in a week.

He said testing would take two weeks if all of the city’s 7.5 million people signed up, even though medical experts said such a mass undertaking would ideally be completed within five days, because the coronavirus spreads easily.

“If we can find those [invisible coronavirus carriers] so they can no longer infect other people in society, it would be very helpful in Hong Kong’s fight against Covid-19,” Wu said.

While his lab was not responsible for the distribution and collection of testing bottles, he suggested the items could be delivered to residents through convenience stores or even at MTR stations.

As for collections, he said the government could arrange for vehicles at locations across the city where people could submit their samples.

Wu dismissed fears the samples would be sent across the border so the mainland authorities would have residents’ DNA, stressing personal data would be destroyed after the tests were completed.

Citing other experts who attributed the third wave to aircrew and maritime workers previously being exempt from Covid-19 testing, he said risks remained because the privilege was still in place for more than 20 other groups – including directors of Hong Kong-listed companies, and owners of Hong Kong companies with factories across the border.

“Government seems reluctant to permanently close the gate,” he said.