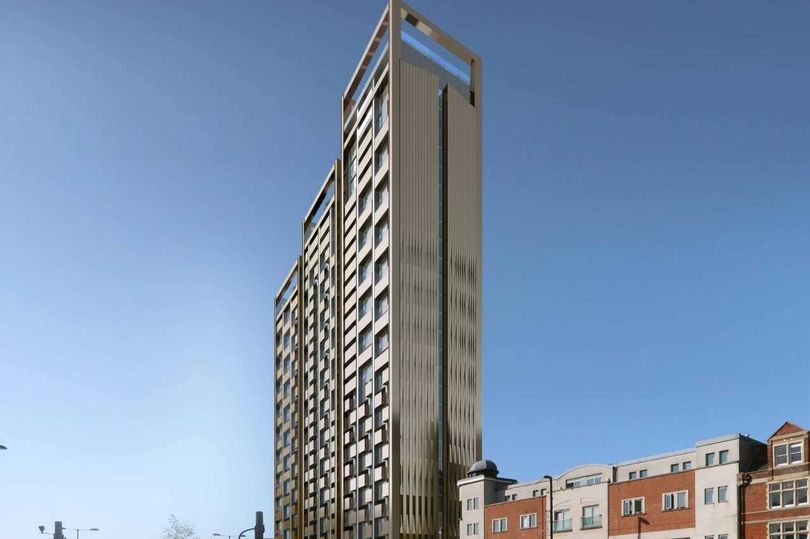 Work on an ‘iconic’ town centre tower block seems to have been halted, as reports from China suggest the company behind the project may be struggling.

There are growing fears that another multi-million-pound town centre development in Croydon may have hit the buffers.

A series of reports in the Chinese press this month suggest that R&F Properties is struggling to meet the Beijing government’s new rules to reduce developers’ debt. R&F owns the Nestlé Tower, St George’s Walk beneath it and the neighbouring Grade II-listed Segas House in the town centre, all just across Katharine Street from Croydon Town Hall and over the road from the Fairfield Halls.

R&F, based in Guangzhou, near Hong Kong, acquired the Croydon properties in a £60million deal in March 2017.

Work on R&F’s £500million Queen’s Square project got underway in 2019, with the beginning of the repurposing of the 22-storey Nestlé Tower office block into 288 private flats.

There was, in common with many other building sites, a hiatus in works last year because of coronavirus, but there has been no sign of any resumption in 2021, with the site idle for at least 12 months.

Inside Croydon’s calls to R&F’s London offices and to builders Ardmore went unreturned.

Delays in delivering what was presented as a “prestigious” and “iconic” development will be just the latest blow to “ambitious” Croydon and the council’s town centre “Growth Zone”.

It follows the belated admission from the Town Hall that the £1.4billion Westfield scheme for the Whitgift Centre had collapsed, and comes hot-on-the-heels of serious issues with the council-run refurbishment of the Fairfield Halls and development of the neighbouring College Green site.

The Nestlé Tower has been standing vacant since 2012, after the Swiss food multi-national quit the office building it had occupied since it was built in 1964.

The tower and the St George’s Walk site have been through the redevelopment mill before.

Nearly 15 years ago what was called the Park Place scheme was proposed by then-owners Minerva and LendLease. They intended to build a mixed-use development including department store (remember them?) for John Lewis (remember them?).

A Compulsory Purchase Order was agreed by the council in 2007, but the then Tory-controlled authority pulled the plug two years later after LendLease walked away from the project and fickle Minerva was unable to progress the scheme.

R&F’s ambitious plans for Queen’s Square are supposed to see the main tower increased to 28 storeys, while an adjoining five-storey office building is supposed to be stretched into a seven-storey block of 63 mixed tenure residential units, with commercial uses at ground level.

In 2019, after his company, Ardmore, had been given a £100million contract for the first phase of the work, director James Byrne said, “The redevelopment of Queen’s Square is one of south London’s most iconic projects.”

But the world after covid is proving to be a cruel place.

In China, much of the economic growth and development of the past two decades has been fuelled with corporate borrowing.

And after a year of no or little economic activity, some of the companies with the largest debt piles are struggling to raise enough cash just to make their interest payments, putting some of them on the brink of collapse.

The situation surrounding one Chinese firm, Evergrande, has caused panic in some Asian stockmarkets. Evergrande’s borrowing tops $300billion, making it the world’s most indebted developer.

The Hong Kong stock market was closed yesterday when it was announced that the company was due to make interest repayments of $83.5million today. Evergrande’s shares have lost 80 per cent of their value so far this year, and while the scale of R&F’s finances is nowhere near as huge, the development company with an interest in an iconic Croydon building is affected by similar issues.

This week, the Financial Times reported that across China, sales of newly developed properties “are flat or declining as authorities tighten access to mortgages, and developers are now offering discounts in an attempt to shift the units — even if it leads to a small loss”.

They add, “Evergrande’s woes highlight the property sector’s importance to China’s financial system, but its weakness and those of hundreds of other developers in China would also have profound consequences for the wider economy.”

The FT calls it a “nationwide chill sweeping across China’s real estate sector”.

Not for the first time, it seems, when China sneezes, Croydon is among those who catch a cold…