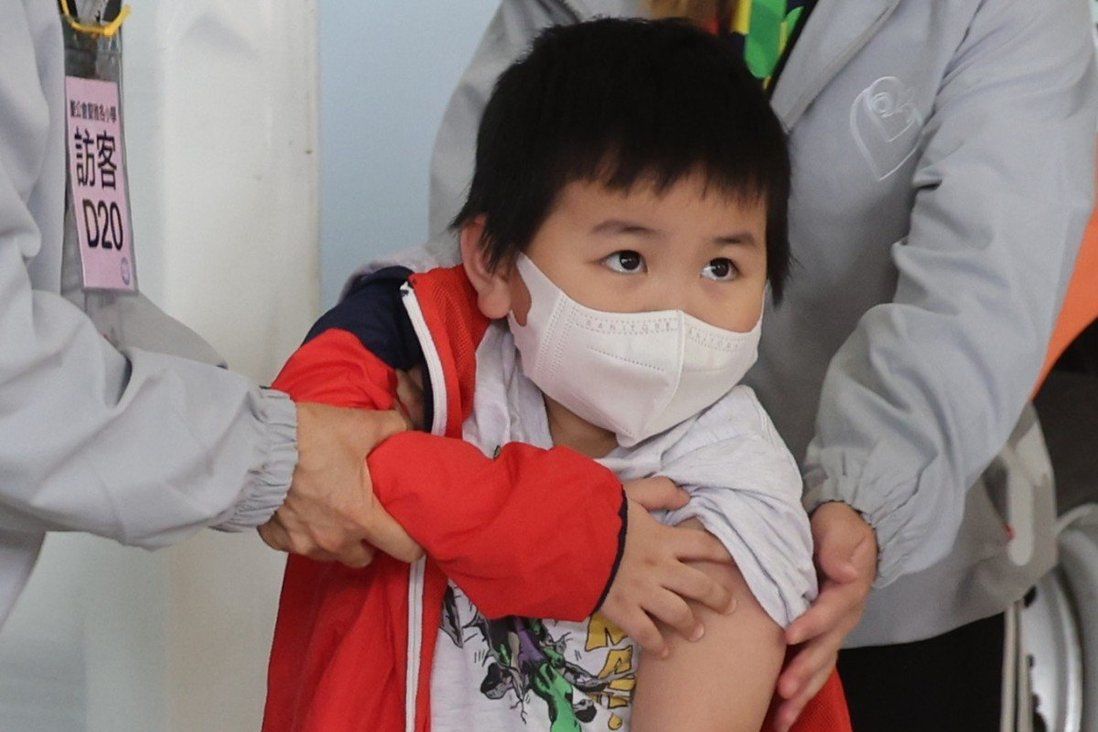 Hong Kong experts ‘set to approve jabs for infants’, with Sinovac most feasible

Hong Kong health experts are likely to recommend next month that the government allow children under the age of three to receive Covid-19 vaccines “as soon as possible”, with the Chinese-made Sinovac jab considered the most practical option, the Post has learned.

A source on Sunday said the government’s Scientific Committee on Vaccine Preventable Diseases would probably agree with the measure during next month’s meeting, adding that evidence suggested the jabs were safe for those aged between six months and three years.

Committee chairman Professor Lau Yu-lung said that if the proposal was passed immediately, it would still take a significant amount time to fully vaccinate children under the age of three.

He told the Post that children under the age of three needed to be inoculated “as soon as possible” to reduce the number of hospital admissions amid a recent rise in coronavirus cases.

the last few days, creating pressure for staff,” he said.

Hong Kong on Sunday reported 3,486 coronavirus infections, 173 of which were imported, and four additional deaths. The city’s overall Covid-19 tally stands at 1,294,082 cases and 9,437 related fatalities.

According to government figures, about 92.8 per cent of Hongkongers aged 12 or above have received at least one vaccine jab, while 76.6 per cent of children aged between three and 11 were inoculated with one dose.

Under current rules, anyone aged five or above can receive a German-made BioNTech jab, while the Sinovac shot is available to those aged three or above.

Lau said approving the Sinovac vaccine for those under the age of three would be “practically the easier way” as the dosage for infants and adults was the same, while the BioNTech jab would need to be diluted to one-tenth of its standard volume.

“It is not possible to take out one-tenth of an adult dose, as how could one accurately draw out such a small volume,” he said.

While Lau said pharmacists were trained to administer the correct dosage of the BioNTech jab for those aged five to 11, he doubted it would be possible to do the same for infants. He added that the special formulas which could solve the dilution issue were not currently available in Hong Kong.

The committee chairman also noted that data from South Africa showed the Sinovac jab was safe for children below the age of three and the United States had previously approved the use of the BioNTech vaccine for anyone older than six months.

Regardless of which vaccine was administered, the interval between the first and second doses should be one month, he said.

Lau added that a third jab should be given about three to five months after a second, but the interval could be reduced in the event of a surge in virus cases.

Committee member and health expert Professor Benjamin Cowling, who is also head of the University of Hong Kong’s epidemiology and biostatistics division, said he believed the coronavirus vaccines were safe for infants based on overseas trials.

“If there’s sufficient data indicating that the vaccine is safe for the group and that it does provide protection against Covid-19, particularly severe Covid-19, I think there will be a case to recommend it,” he said.

Cowling also echoed Lau’s stance that it would be impractical to dilute BioNTech’s current vaccine formulation into an administrable dosage for children younger than age three.

“It’s not about safety … It’s a logistical challenge … A vial would produce five doses for adults. That would be 50 doses for infants. It can’t be stored overnight,” he said. 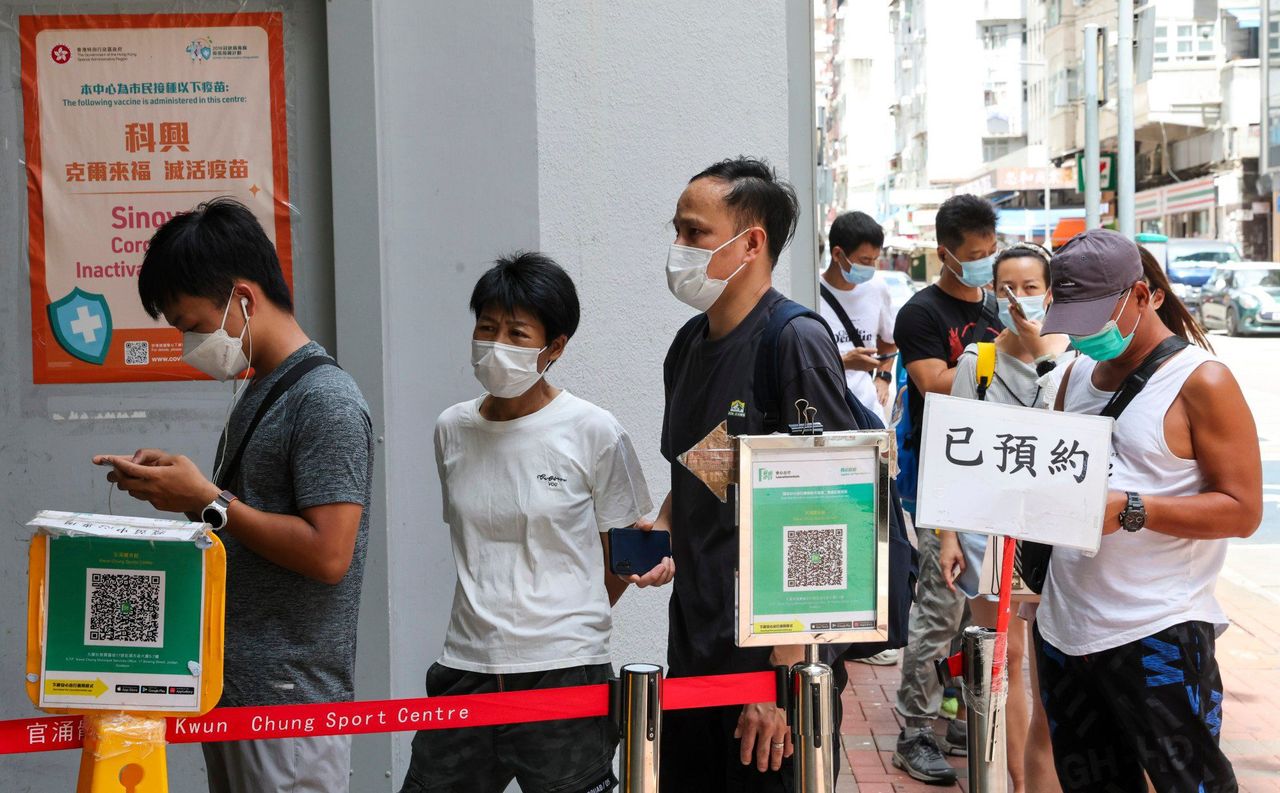 Residents wait to receive a dose of the Chinese-made Sinovac jab outside the Kwun Chung Municipal Services Building.

Another iteration of the BioNTech vaccine had shown positive results when tested on young children, Cowling said, but added that the Sinovac jab was the more feasible option.

Earlier in the month, Secretary for Health Lo Chung-mau said authorities were examining the possibility of providing vaccines to children under the age of three to better protect them from Covid-19.

The minister had also referred to a case involving an 18-month-old infant from Singapore who died from encephalitis soon after contracting the virus, with Lo saying that society had a responsibility to protect the health of the next generation.

According to recommendations by the World Health Organization, the Sinovac and BioNTech vaccines are safe for individuals aged 18 and older, and five and above, respectively.

The Hospital Authority on Sunday also clarified reports from local media that said that unregulated paracetamol tablets and cefoxitin sodium injections produced in mainland China were being used at public hospitals.

Dr Larry Lee Lap-yip, the authority’s chief manager, said the import and use of both medications from the mainland were in compliance with the relevant rules and regulations in Hong Kong.

Separately, Dr Chuang Shuk-kwan, head of the Centre for Health Protection’s communicable disease branch, responded to suggestions from several health experts that daily rapid antigen tests (RAT) at schools should be scrapped, saying the measure should continue as it had helped to contain outbreaks linked to campuses.

“At the present moment, we only observe a few clusters of cases among individual classes in some of the schools, around a few a day,” she said. “This is an effective measure to prevent major outbreaks in the schools and it should be maintained in the meantime.”

Secretary for Education Christine Choi Yuk-lin also said the daily RAT requirement for students was to ensure they could go to in-person classes.

“RAT testing is one of the measures for us to ensure the safety of our students. The experts’ suggestions are coming from a medical perspective. [Our concerns] are coming from the perspective of protecting the students,” she said.

“We will closely monitor the development of the pandemic and take the experts’ advice into consideration, but our priority is students’ health and safety.”