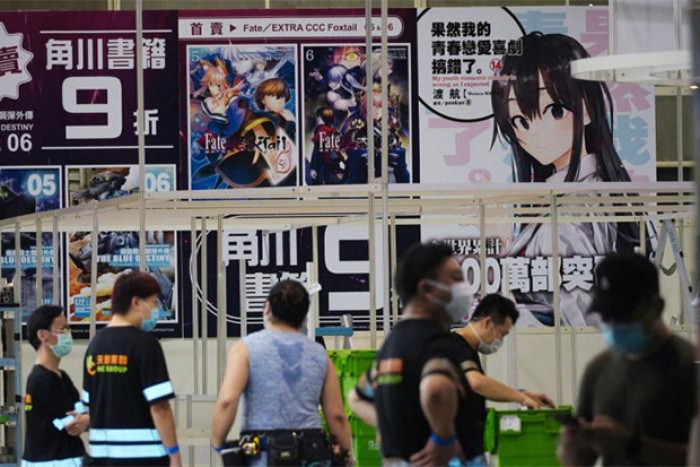 Exhibition planner Joe Wong Chu-kong's heart sank when the annual Hong Kong Book Fair was cancelled two days before it was due to open last month.
His team of workers had spent four weeks setting up booths for exhibitors, and now they had to remove everything and clear out of the Hong Kong Convention and Exhibition Centre in Wan Chai.

"I called my truck drivers who were on the way to deliver materials and told them to just turn around and call it a day," recalled Wong, a project manager for Toy Exhibition Limited who has been in the business for 15 years.

With the event called off because of the surge in Covid-19 cases last month, some clients were unwilling to pay for work done.

"It was heartbreaking," Wong said. "The cancellation was out of my control. I felt helpless because I had to find ways to pay my staff even if we did not get compensated."

The pandemic has dealt a massive blow to Hong Kong's Meetings, Incentives, Conventions and Exhibitions (MICE) industry, with event planning companies facing millions of dollars in lost income, and thousands of jobs at risk.

More than 50 exhibitions and conferences cancelled or postponed since the start of the year were expected to draw more than 54,000 exhibitors and more than 3.4 million visitors, according to the Hong Kong Exhibition & Convention Industry Association.

Last year, some 1.69 million people came for MICE events, according to the Hong Kong Tourism Board, and they made up more than 55% of all business visitors.

As the stricken industry hopes for a lifeline from the government, about half of 160 companies polled by a new concern group of exhibition production companies and related workers said they were considering closing down.

The group estimates there are about 600 firms related to exhibition planning, involved in backdrop design, furniture rentals and booth design and assembly.

The jobs of nearly 5,000 people were at risk, said concern group member Dennis Yung Wai-kwok, an exhibition planner since 2002.

"We feel very helpless," said Yung, an accounts director of Goodtick Exhibition and Production Limited, which mainly puts up booths. "Exhibition planners have had zero income for most of the year because there are no more trade shows."

Planners typically needed two to four months to prepare for a trade show, hiring as many as 3,000 casual workers as booth builders, technicians, stage managers, banner designers, truck drivers and photographers, he said.

The concern group, set up after the book fair was cancelled, estimates that small to medium-sized exhibition production companies have been losing money at a rate of HK$5 million (20 million baht) per month.

Anita Tang, chairwoman of the Federation of Hong Kong Event Management, Exhibition and Stage Production, recalled the impact when the fair was called off, saying: "All hope was lost at that point. The book fair was a gauge of whether we could plan events for the rest of the year."

Although companies are resigned to the possibility that trade shows will not return any time soon, their worries are mounting.

"We don't have any projects or events, but I'm still paying all kinds of expenses each week," said Tang, project manager at Adliger Exhibition Service with more than two decades of experience.

Her company was struggling to pay the basic wages for full-time staff and warehouse costs for its exhibition materials, she said.

In a poll by the Hong Kong Exhibition and Convention Industry Association last month, almost all respondents said the impact of Covid-19 on their business was either "severe" or "extremely severe".

All 59 survey respondents out of the industry group's 115 members projected a loss of revenue in 2020, with 36% estimating losses to top HK$100 million.

"Only four small-scale consumer exhibitions took place from February to July," association chairman Stuart Bailey said. "All other exhibitions and conventions scheduled to take place have not been held. No event being held means that there has been zero cash generated by organisers, venues and suppliers to the industry."

Emphasising the need for government aid, Bailey told the Post that many exhibition planners may not have enough cash reserves to wait for to recovery. "It's not just a difficult year, it's now a disaster," he said. He noted the exhibition industry had an important role in the city's economy, bringing global businesses and buyers to close multimillion-dollar deals, with spin-off business for hotels, restaurants and retail.

When Covid-19 cases surged in mid-July, the government delayed disbursing HK$1.02 billion earmarked for the Convention and Exhibition Industry Subsidy Scheme under its anti-epidemic fund, but did not say when the funds would be rolled out.

Most respondents in the poll said the subsidy scheme did not provide sufficient help, and no firm had received any subsidy under it yet.

But with no events taking place and the expo site converted into a makeshift hospital for Covid-19 patients, no payouts have been made.

Chief Executive Carrie Lam Cheng Yuet-ngor said at a press conference on Friday that since July, the government has been in discussions to open up travel between mainland China and Macau, as well as for airlines to resume services. But plans have been put on hold as the city faced a third wave of infections.

"During this whole period, we never stopped trying to look for new business opportunities for small to medium-sized enterprises on online platforms, and we'll make good use of the HK$1.02 billion dollars under the Convention Exhibition Support Scheme," Lam said, "We haven't yet launched the scheme because we still have an epidemic."

A spokesman for the Commerce and Economic Development Bureau, which is handling the scheme, said the bureau was in close touch with industry groups including the association.

Bailey suggested extending government subsidies to cover wages of exhibition planners for a longer period, as the Employment Support Scheme ran only until November. He also asked landlords to provide rent relief for warehouse space to ease financial pressure on struggling companies.

About 22,000 suppliers and half a million buyers joined the first fair between June 28 and July 24, which included consumer electronics, gifts, kitchenware, medical supplies, outdoor activity equipment, clothes and accessories.

The second virtual show from July 27 to Aug 7 drew 1,300 exhibitors and 13,000 buyers, with products ranging from electronics to information and communications technology, medical and health care, housewares, home textiles and furnishings, fashion and others.

"The global sourcing model is becoming more focused on digital solutions following the pandemic, and we envisage that an online-offline hybrid model will be the way to go for future HKTDC trade exhibitions," said Benjamin Chau Kai-leung, the council's deputy executive director.

About 40 events had been rescheduled or reformatted online to ensure the safety of exhibitors, buyers and the public, he said.

About 70% of exhibitors polled after the first two shows said it was their first time at online events, and just as many said physical events remained crucial for proper business connections.

"At a physical show, buyers can see our fabrics, materials and workmanship and then negotiate the price to directly make the order," she said. "There's still a long way to go after the virtual meeting to actually get the deal done."

She connected with two prospective buyers though the virtual fair, for deals possibly worth US$50,000. In comparison, her company secured five deals at a similar trade show around the same time last year.

With the pandemic showing no sign of abating, the Tourism Board has announced the Wine and Dine Festival usually held in November will go virtual, while more events have been cancelled or postponed.

The annual Hong Kong Cyclothon, cancelled last year because of anti-government protests, has been called off again, this time because of the pandemic.

The Jewellery & Gem World Hong Kong trade show has been rescheduled for the first time in 38 years from September to November. Its summer edition, usually in June, was pushed back by a year.

Celine Lau, director of jewellery fairs at trade show organiser Informa Markets Jewellery, said: "Physical fairs will not be replaced by online events for this reason - nothing beats the human touch. In a business built on trust, the value of a handshake or a warm smile can never be underestimated."
#COVID  #COVID-19
Add Comment