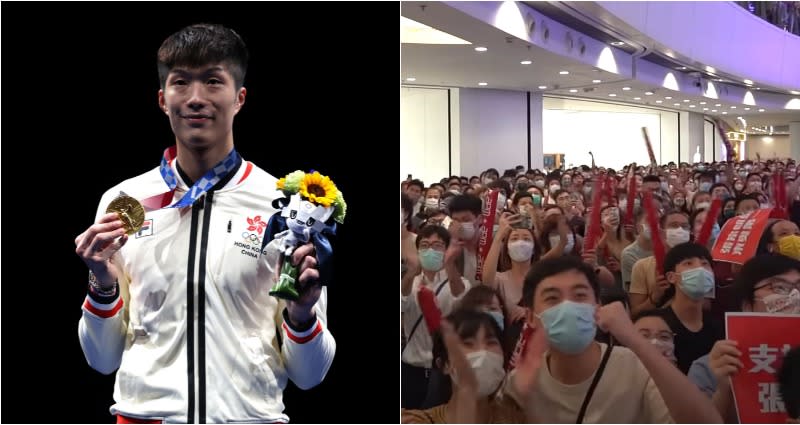 The details: Cheung, 24, beat Italian Olympian Daniele Garozzo in the grand finals of men’s fencing at the Tokyo Games on Monday, according to France24.

*  “To be honest, I'm not that calm, I don't know what I can do," Cheung told reporters after winning 15-11 and taking home the gold medal. “It’s like a dream – that’s why everyone thinks I’m calm, but I didn’t know what happened."

*  Hong Kong won its first gold medal at the 1996 Atlanta Olympics for windsurfing. It was then followed by a silver medal in table tennis at the 2004 Athens Olympics and a bronze in cycling at the 2012 London Olympics.

*  “Because in total medals in Hong Kong, we only have three. Now we have four because we haven’t had a gold medal since 1996 so it means a lot to show to the world we can do it,” Chueng said.

*  Cheung will reportedly receive five million Hong Kong dollars ($600,000) as a reward from the city's government for his gold medal win.

*  Cheung’s win also united the people of Hong Kong, from pro-Democratic leaders to pro-Beijing supporters, according to Asian Nikkei.

*  Ming Pao, a pro-democratic daily newspaper, praised Cheung for bringing honor to Hong Kong, while Wen Wei Po and Ta Kung Pao, two other newspapers from the opposite political spectrum, called him a “god of sword.”

*  Chief Executive Carrie Lam also applauded Cheung for “making history” for the city and that it “makes all Hong Kong people proud."


Past achievements: Cheung, who is ranked 19th in the world of fencing, won many medals under his name from different international events in the last seven years, The Standard reported.

*  Cheung won four gold medals from different categories at the Asian Junior and Cadet Fencing Championships in Jordan in 2014. He also took home the bronze medal in the men’s team foil in fencing at the Incheon Asian Games the same year.

*  Cheung qualified for the Rio 2016 Summer Olympics but lost to Brazil’s Guilherme Toldo in round 16.

*  Cheung won the bronze medal at the Jakarta Palembang Asian Games in 2018 and a silver medal at the Italy FIE Grand Prix in 2019.