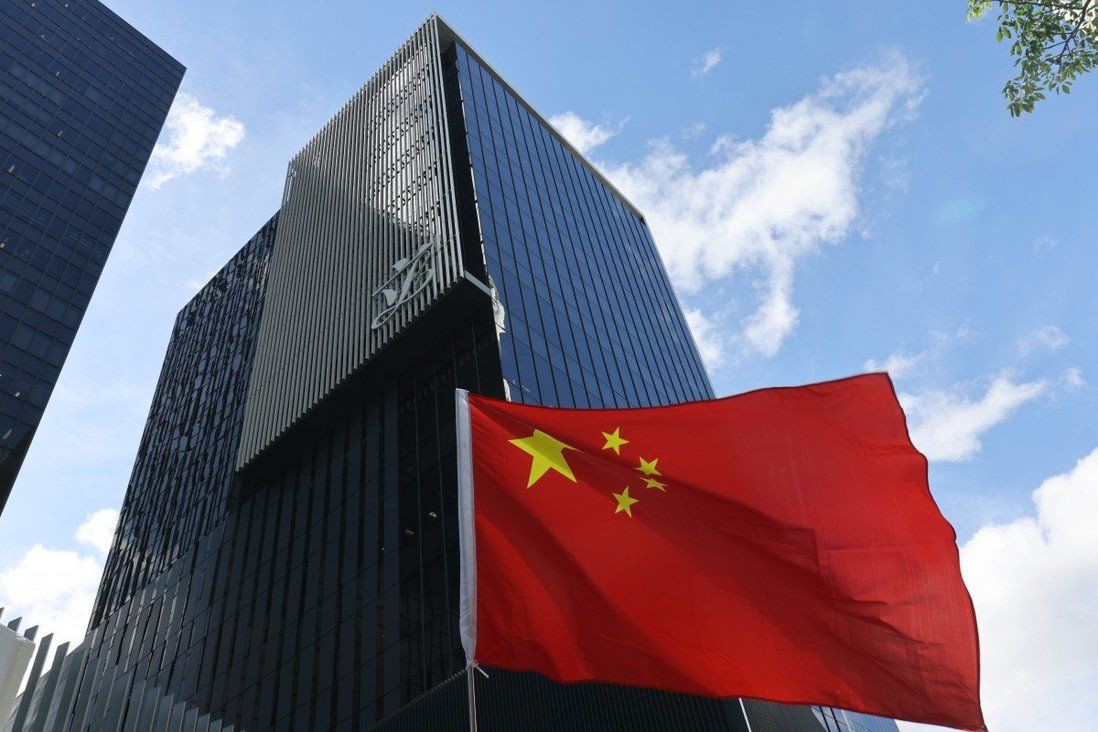 Regina Ip puts her own bloc under spotlight, suggesting that future lawmakers should possess analytical skills and knowledge.

Beijing should set out expectations for Hong Kong’s pro-establishment lawmakers, a loyalist has suggested ahead of the imminent passage of new legislation to implement an electoral overhaul of the city’s political system.

Casting her own bloc under the spotlight, Ip, chairwoman of the New People’s Party, argued that future lawmakers from the camp should possess analytical skills and knowledge, among other qualities.

“City authorities and the central government can come up with more objective criteria. First, you need them to dedicate time to fulfil their duties. Second, you need to have the energy and sufficient knowledge,” Lau said at the second debate of the bill in the legislature.

“We need more lawmakers with the ability to analyse [policies] rationally, not just those who bank only on good quotes or attacks on the government.” 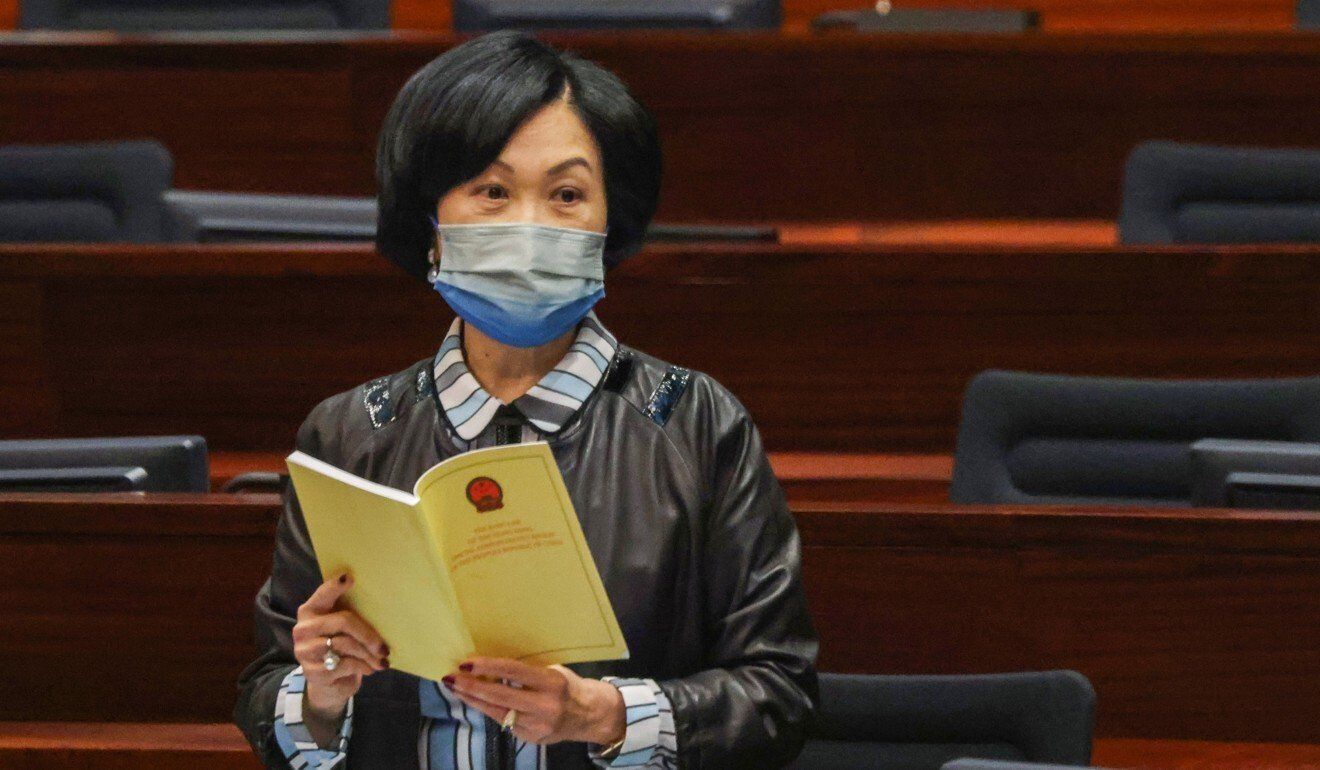 Pro-establishment legislators on Wednesday resumed their scrutiny of the proposed raft of changes to implement the Beijing-imposed electoral reforms, which were approved by the country’s top legislature in March.

The bill was tabled by Secretary for Constitutional and Mainland Affairs Erick Tsang Kwok-wai.

A source said on Wednesday that former pro-establishment district councillor Chris Ip Ngo-tung was set to be named as undersecretary for constitutional and mainland affairs, or Tsang’s deputy. Ip was chairman of the Yau Tsim Mong District Council before being defeated at the 2019 polls.

The paper, containing more than 700 pages of legal amendments, is expected to be passed as soon as Thursday, after which an overhaul will take effect on local elections for lawmakers and the chief executive.

Under the changes, the Election Committee, traditionally tasked to select the city’s leader, will grow by an additional 300 seats to become a 1,500-strong body, comprising a new sector that will include members from national organisations.

The new body will also get members from groups representing Hongkongers working or living in mainland China, as well as from district-based area committees and fire safety groups. Members from the municipal-level district councils, dominated by the opposition since 2019, will be stripped of their representation.

Among other new changes, the current 70-seat legislature will be expanded to 90 members. Its 35 directly elected seats in the geographical constituencies will be slashed to 20, while 40 new seats will be returned by the Election Committee. 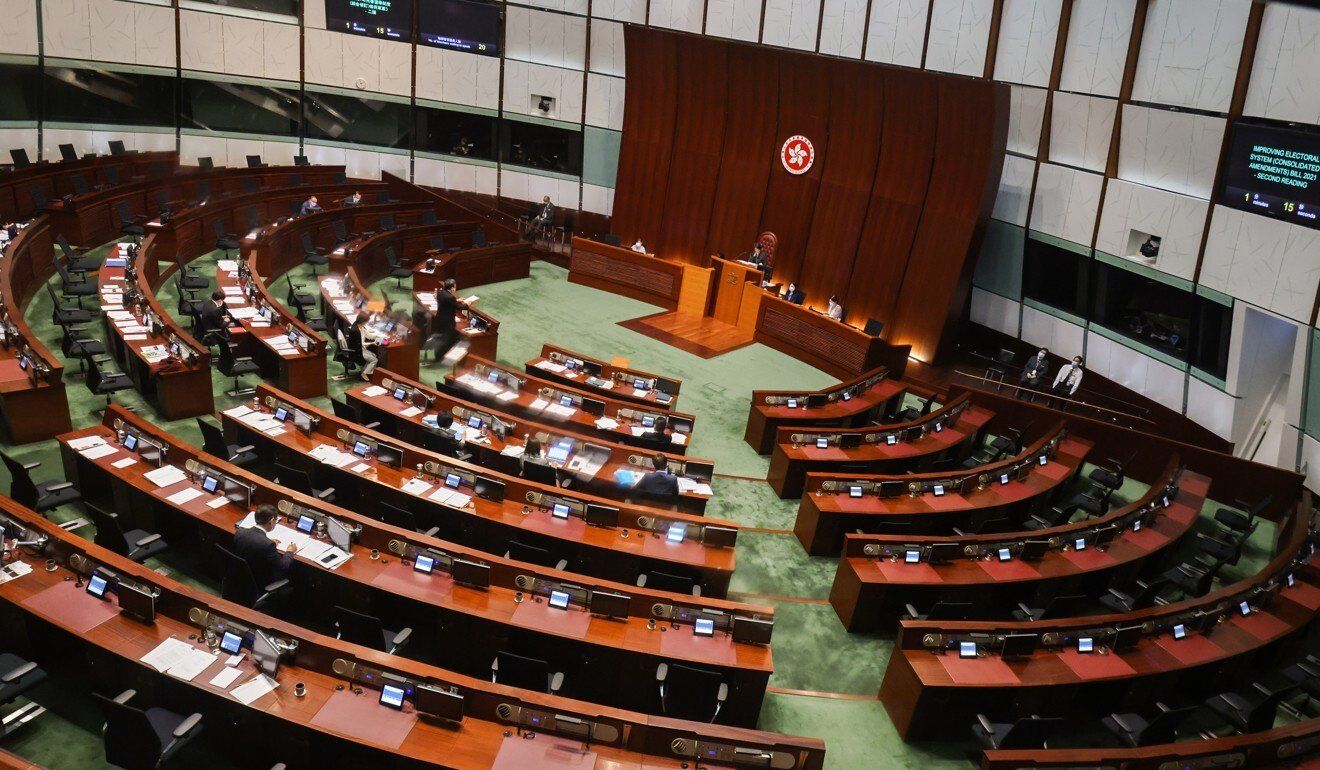 While critics have expressed worries over the perceived cutback on democratic elements and described the reforms as a “retrogression”, pro-establishment lawmakers defended the changes as a necessity.

They said following the shake-up, both the Legislative Council and chief executive election would be more representative, while the Election Committee and a candidates’ qualification review committee would wield power to screen out radical individuals accused of being involved in the 2019 social unrest – or what they referred to as “black violence”.

Starry Lee Wai-king, chairwoman of the Democratic Alliance for the Betterment and Progress of Hong Kong, the city’s biggest pro-establishment party, dismissed suggestions of retrogression on Wednesday.

She noted that under the changes, the Election Committee’s membership would be expanded to serve more unrepresented groups. These changes reflected democratic progress, she argued.

Pro-establishment lawmaker Martin Liao Cheung-kong suggested the government should seek to further explain the changes to the public.

“It’s understandable that residents would need time to comprehend and adapt to these changes, but if people cannot see the meaning behind [the reforms] … they are blocking themselves from this new path of democracy,” he said. 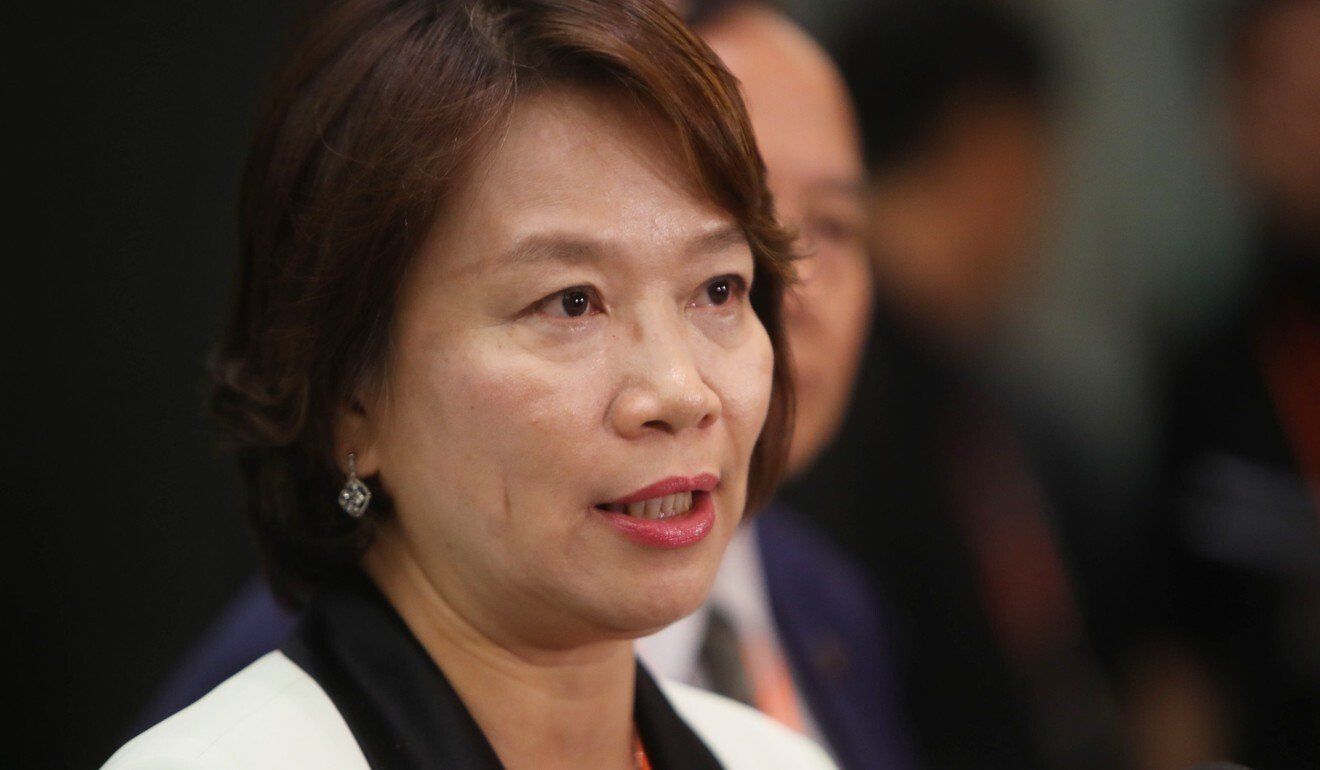 Priscilla Leung Mei-fun, of the Business and Professionals Alliance for Hong Kong, said the opposition camp in Legco had been radicalised in the past year and the electoral changes would ensure only reasonable candidates from the camp took office.

Regina Ip, who proposed elements for her pro-establishment colleagues to raise their game, also noted that foreign governments had been accusing Beijing of breaching the Sino-British Joint Declaration and destroying the city’s autonomy by imposing the electoral overhaul.

But pointing to the historical document signed by Beijing and Britain in 1984, she said: “Not one clause there says there will be democracy in Hong Kong and universal suffrage.”

Cheng Chung-tai, one of two independent lawmakers who stayed on after the opposition camp’s mass resignation last November over the disqualification of four of their colleagues, took issue with the Election Committee’s new power to nominate Legco candidates. He warned this could lead to “corrupt practices”.

He also questioned whether the changes would spell an end to Hong Kong’s autonomy. 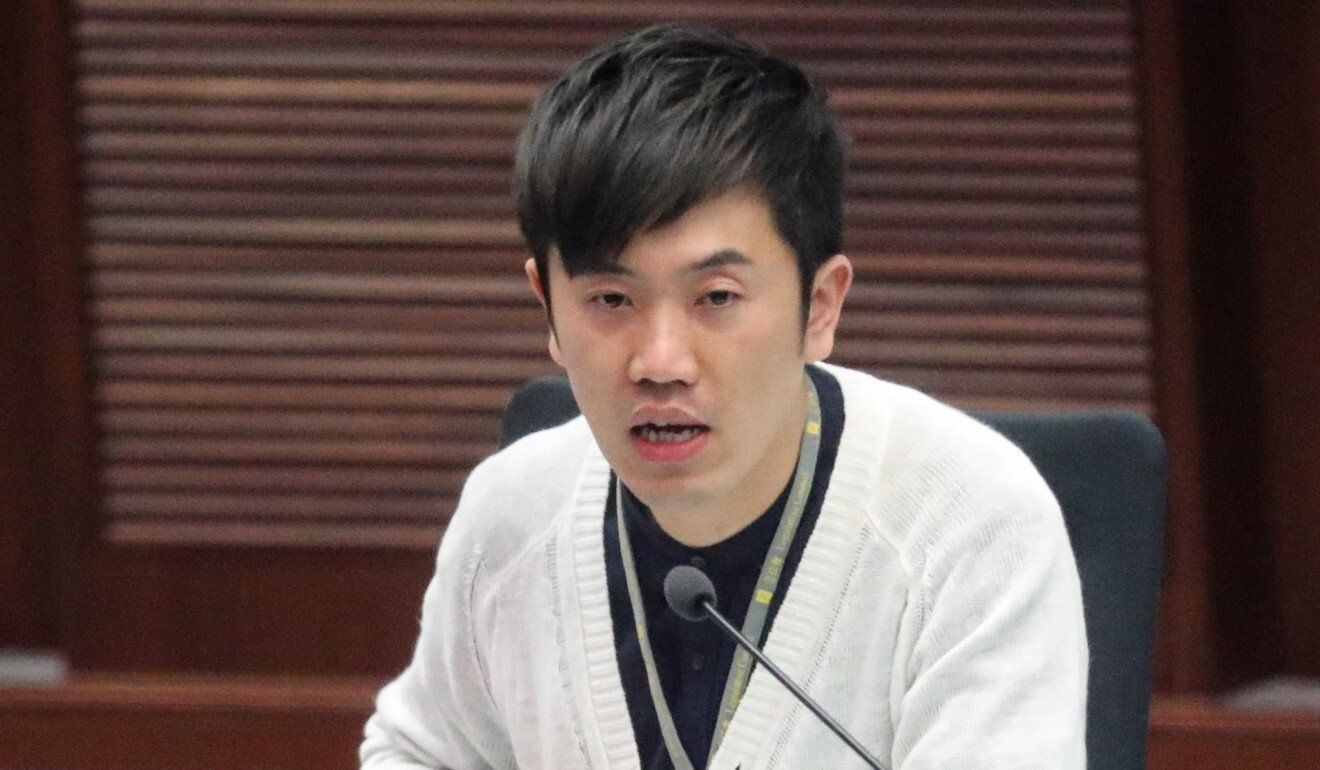 “When we talk about political screening of candidates, we are actually looking at the issue from a relatively narrow perspective,” he said.

“The real issue I think is whether there will still be ‘Hong Kong people governing Hong Kong’ in five years’ time.”

Medical sector representative Dr Pierre Chan, the other independent lawmaker, pointed to changes in the way members of the Election Committee would be selected.

Chan noted that many seats up for grabs on the committee would still not be returned by individual votes, but by corporate ones instead, with such ballots held by bodies with close Beijing ties.

Meanwhile, Dr David Fang, a former president of the Medical Association, said at a press briefing on Wednesday that the medical sector would not rule out taking legal action in challenging the proposal to merge the medical and health sectors in the Election Committee. He said the plan “hurt doctors’ dignity”.

“We agree that people who are opposing China and upsetting the order in Hong Kong should not hold power ... but the current plan is an overcorrection,” Fang argued.

Dr Gabriel Choi Kin, incumbent president of the association, said he was open to discussion on legal action, but questioned its usefulness.