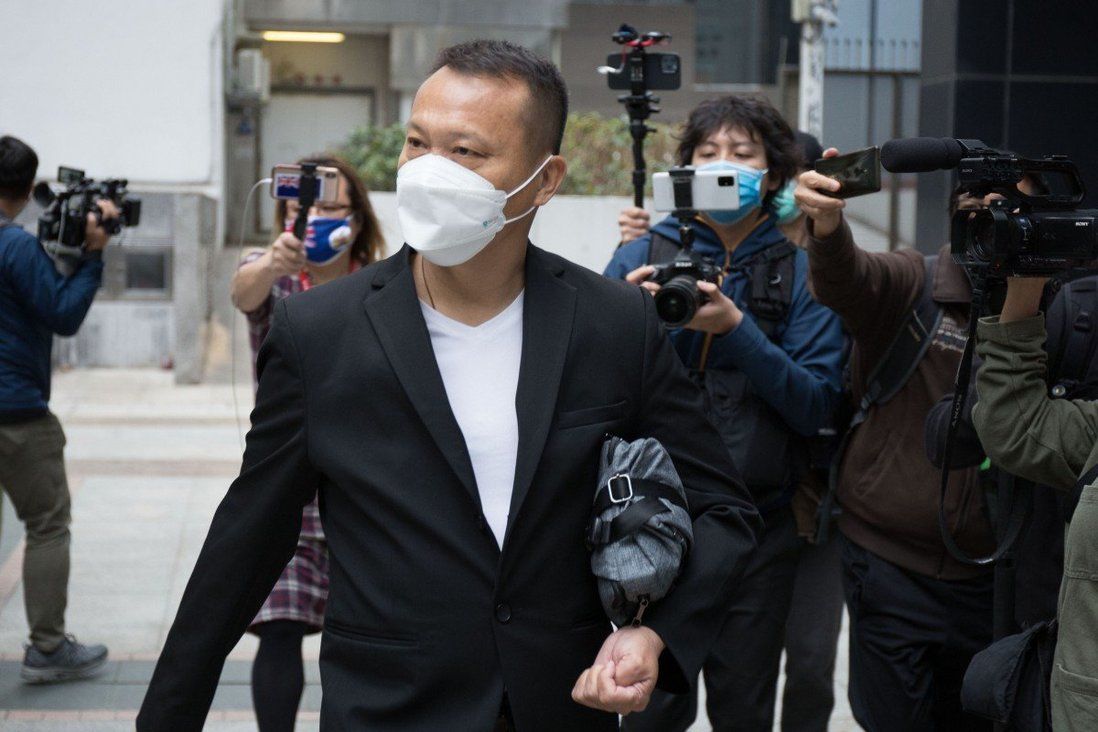 Ng Wai-nam, 59, was wearing a white shirt when he joined a stand-off with black-clad group near Ying Lung Wai village early on July 22, 2019. But he denies injuring anyone with the stick he was carrying.
A driver charged over his role in a mob attack at a Hong Kong railway station in 2019 has admitted playing a part in the violence, but insisted he was merely exercising self-defence and did not injure anyone.

Ng Wai-nam also said on Tuesday he had no prior knowledge of the attack and that before he became involved in the chaos, he had tried to act as a peacemaker by telling the gathering crowd to disperse.

The 59-year-old was testifying at the District Court where he stands accused alongside five others of rioting and wounding others during the overnight violence in and around Yuen Long MTR Station between July 21 and 22, 2019, a turning point in the anti-government unrest that year.

Prosecutors said earlier a rod-wielding, white-shirted mob of about 50 people first carried out assaults inside the facility on the night of July 21, then outside the facility in the early hours of the next day, followed by another incident in a connected shopping centre.

Ng, an outsourced road maintenance worker for the Highways Department, was involved in an incident near Ying Lung Wai village just after midnight, where a group of 30 people in white surrounded and attacked men wearing black.

But Ng depicted a tug of war between a group of black-clad outsiders and white-shirted villagers who were “protecting their village”.

He said he drove past the scene wearing a white shirt after midnight of July 22 while on his way home. He later learned from a local resident some people had come to “remove the village and demolish the ancestral shrine”.

Ng said he had believed her as he had previously lived in the village for decades and maintained a friendly relationship with the locals.

He said most of the villagers were not armed, but some of the outsiders were carrying rods and umbrellas.

Ng claimed he was later punched in the face after the black-clad group charged towards the villagers, but said the assault was not captured by the video the prosecutors had.

“There was a man in dark clothing next to me, one foot apart, holding a wooden stick. I felt threatened and I feared he would hurt me, so I grabbed the stick from him,” Ng said. “I was under threat so I had to act fast. I needed to protect myself from harm.”

In explaining his use of the weapon, he said: “Because my opponents threw some hard objects at me … I swung the stick in order to keep a distance from them.”

Ng is seen in the footage later swinging at a man wearing an orange helmet, with the latter falling to the ground before Ng swung at him again.

But he denied wounding the man, saying he had merely hit a water barrier in a bid to scare away the man, who had tripped on the leg of another man.

Ng will continue to give evidence before District Judge Eddie Yip Chor-man on Wednesday.
Add Comment