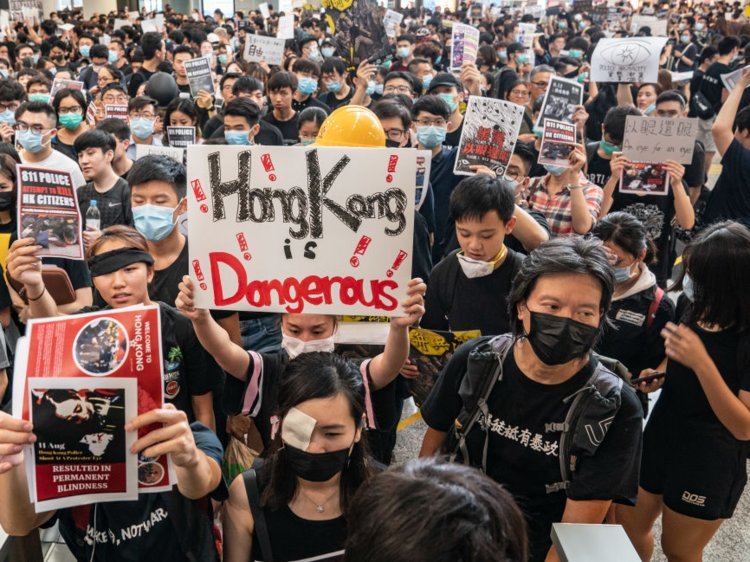 iayang Fan is a Chinese-American staff writer at The New Yorker. Fan has been faced with a barrage of racism while covering the Hong Kong protests. Demonstrators questioned if she is from the Chinese government or if she's actually American. She noted that, with white reporters last week, she didn't face the same vitriol. It highlights Hong Kongers' increasing xenophobia against mainland Chinese.

Jiayang Fan, a staff writer at The New Yorker, has been faced with a barrage of racist inquiries and epithets while covering the Hong Kong protests.

Demonstrators in Hong Kong have been protesting for 16 weekends— first about an extradition bill with China, but now against police brutality. As the sometimes violent demonstrations wear on, some Hong Kongers' anger towards the Chinese government is apparently getting channeled into xenophobia towards acutal mainland Chinese people.

Fan was born in China, but moved to the US as a child with her mother. She shared on Twitter on Sept. 21 that being of Chinese descent and speaking Mandarin has attracted vitriol from passersby and protesters. One called her a "f—ing yellow thug."

Many cast doubt that she was actually American — quizzing her on the demands of Hong Kong's protestors and US legislation. "They suspect I'm (a) commie agent," she said in a tweet.

"My Chinese face is a liability," she wrote in a different tweet. "Just got asked if I'm from US and am (a) reporter why I have (a) Chinese face."

She shared a video of two demonstrators demanding to see her press identification, business card, and passport as a hostile mob demonstrated feet away.

My Chinese face is a liability. Just got asked if I’m from US and am reporter why I have Chinese face. I showed press identification, passport, business iID . “But why I speak mandarin?” Old man asks hostilely. And I’m surrounded by huge mob. Are you really from west? I’m asked. pic.twitter.com/eJj6bGf9gP

She wrote in a tweet, "Not 1 white reporter in press vest around me grilled &surrounded & interrogated &subjected to hostile mob. It's slightly scary, humiliating & unsettling. But HK, I'm with your fight for freedom. I believe in u. Please understand that my yellow face& mandarin r not the enemy."

Now some ppl in black staring & pointing at me. they suspect I’m commie agent.Entirely different experience than my last wknd on frontline w white reporters when protesters came up 2 shake my hands. But isnt this what we r fighting 4 2GETHER?Freedom from discrimination& equality?

Xenophobia against mainland Chinese residents has long been a problem in Hong Kong — but the ill will is growing as Hong Kong's struggles against the Chinese government and protests have exploded into massive, and sometimes violent, demonstrations.

"Some of our outright racism has been transformed into native xenophobia against mainland visitors, though we deny it's racist because mainlanders are Chinese too," South China Morning Post columnist Alex Lo wrote in a 2015 piece. "We have more bigots among us than we care to admit. The path to change first requires at least recognition of the problem, but we are not even there yet."