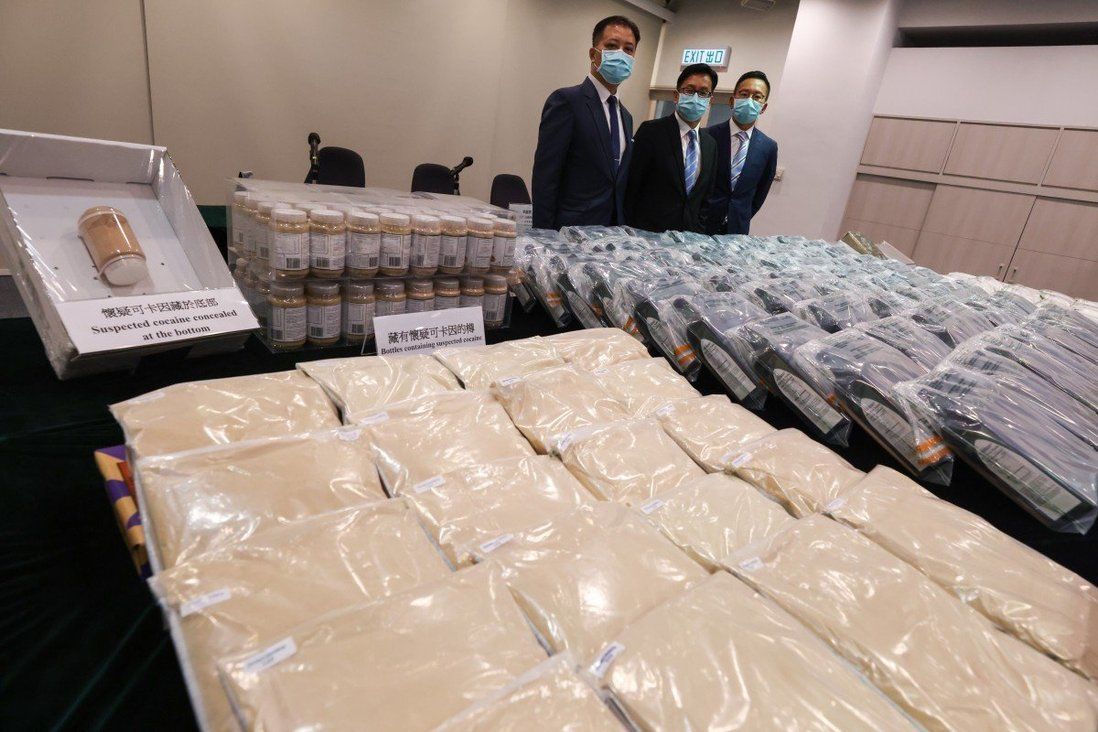 Hong Kong customs officers have seized more than HK$230 million (US$29.6 million) worth of drugs hidden in various shipments of imported food in three separate busts, two of which were the largest of their kind in 20 years.

Four men and one woman were arrested in connection with the three cases, which involved cocaine hidden in a shipment of health food, liquid methamphetamine concealed in a consignment of avocado oil and heroin stuffed in the seasoning packets of instant rice vermicelli.

Customs on Sunday said all three cases were linked to local triad activity, but they were still investigating whether the shipments were connected to each other.

“Because of the [Covid-19] pandemic, the amount of checks drug traffickers need to pass through have increased, so we often see them taking risks and trying to ship large amounts at once,” said Lee Kam-wing, head of customs’ drug investigation bureau. “The methods used to smuggle in the drugs are very clever, but we have managed to figure out various indicators to find these illegal shipments.”

The busts took place between July 12 and Saturday, but were only revealed on Sunday.

Tuesday’s seizure of 145kg (320 lbs) of liquid methamphetamine was the largest amount of the drug to be intercepted in an air shipment in 20 years. The haul was estimated to be worth about HK$80 million.

Lau Leung-chi, customs airport investigation divisional commander, said officers decided to check the shipment of avocado oil from Mexico as the country was a known drug exporter and the logistics company address listed on the waybill was different from its actual location.

Upon inspection, officers found 288 bottles containing about 500 grams of liquid methamphetamine each hidden among others containing actual avocado oil. 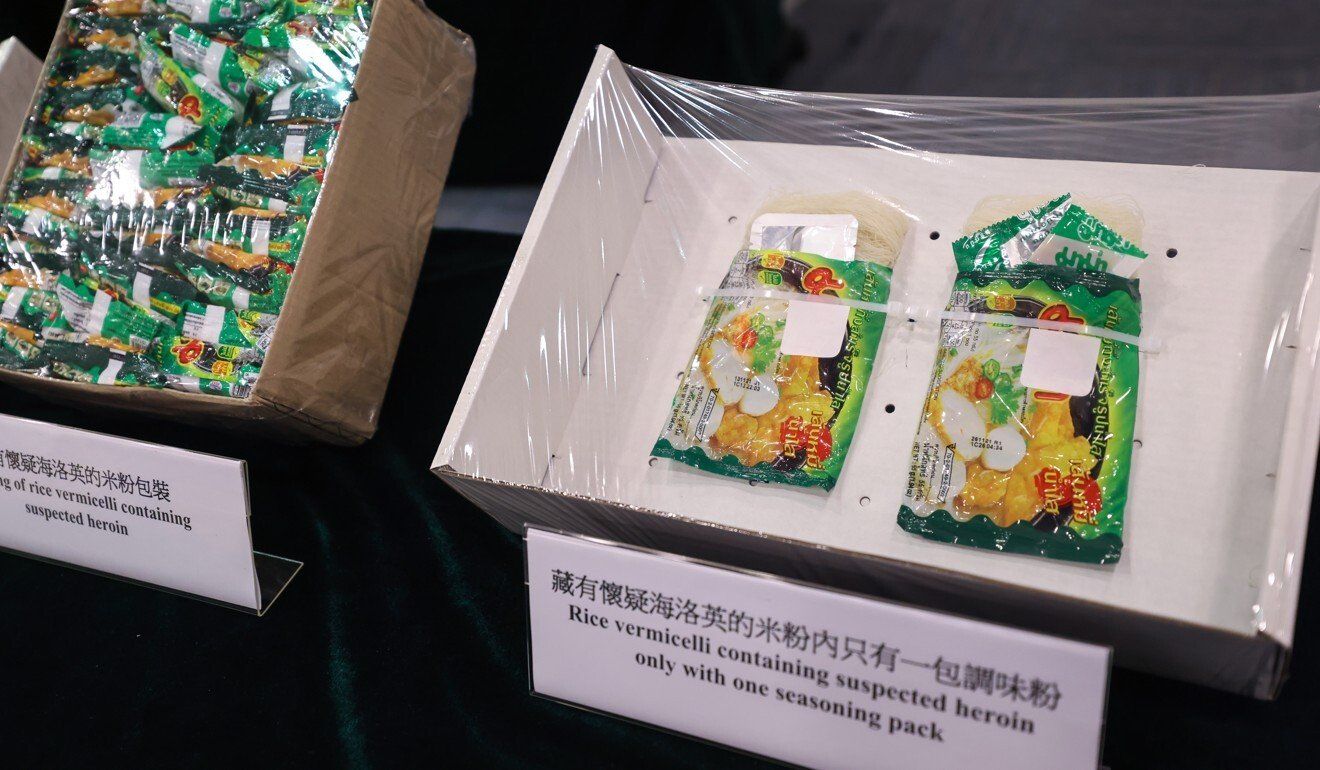 A packet of instant rice noodles from Thailand found to have heroin concealed in its seasoning packet.

On Thursday, customs checked a shipment declared as snacks from Thailand arriving by sea at the Kwai Chung container terminal, and found 61kg of heroin hidden in the seasoning packets of instant rice vermicelli. Two men and one woman, aged 31 to 42, were arrested in connection with the shipment and are expected to appear at Tuen Mun Court on Monday.

That shipment amounted to the largest heroin bust in 20 years, with the drugs estimated to have a market value of about HK$65 million.

Separately, during a raid on an industrial building in Fo Tan on July 12, officers seized 72kg of suspected cocaine with an estimated market value of about HK$85 million mixed in with powdered lucuma fruit, chia seeds and maca, all popular health food products.

The divisional commander of customs’ drug investigation bureau, Chan Siu-kau, said the smugglers had “put a lot of thought” into packaging the cocaine, as the drugs would have to be processed again to separate them from the health food powders. Out of more than 6,800 bottles, only 180 bottles of maca and lucuma powder contained cocaine, he said. A 43-year-old driver was arrested in Sha Tin on July 15 in connection with the case.

Lee said the amount of drugs seized by authorities this year was about the same as 2020, but added that busts had grown over the years, proving authorities’ anti-narcotics strategies were effective.

Trafficking in dangerous drugs is a serious offence in Hong Kong, carrying a maximum penalty of life imprisonment and a HK$5 million fine.

Last month, the United Nations Office on Drugs and Crime had warned that border restrictions brought on by the pandemic had not slowed the expansion of synthetic drug production and trafficking in East and Southeast Asia. About 170 tonnes of methamphetamine were seized in the region last year, a 19 per cent increase from 2019, according to the UN.