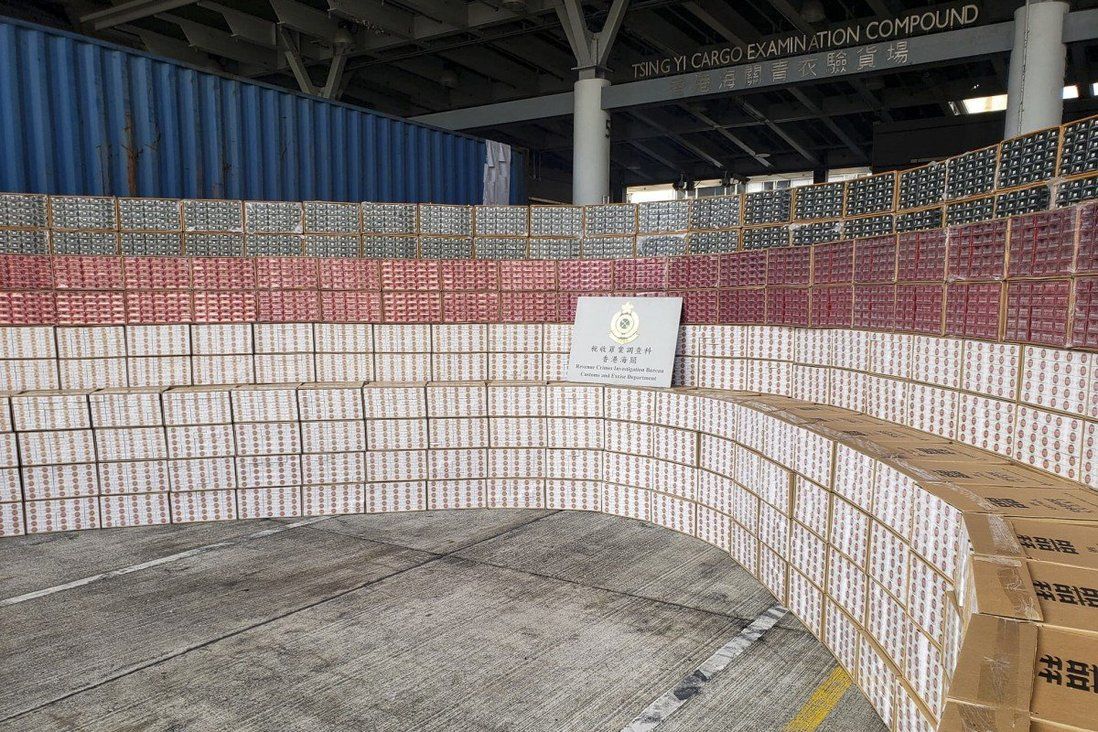 Secret operations under armed escort ensure seized cigarettes are pulverised before being buried in landfills.
Armed customs officers in Hong Kong have carried out secret missions to escort and bury illegal cigarettes in landfills, destroying HK$700 million (US$89.73 million) worth of contraband last year, the Post has learned.

To make sure nobody tried to unearth the black-market cigarettes, a roller truck was used to grind down the tobacco products, which were then mixed with sand and garbage before being buried at landfills in the New Territories.

A total of 36 such operations were carried out last year, destroying nearly 255 million seized cigarettes imported illegally without being taxed.

Customs officers seized 430 million contraband cigarettes worth HK$1.17 billion last year – the highest volume of such seizures in the past two decades, and more than double the quantity confiscated in 2020.

After several major busts in recent months – including a record seizure of 47 million untaxed cigarettes worth HK$130 million – a customs official said international syndicates were smuggling contraband tobacco products into Hong Kong for storage during the pandemic while trying to find buyers in the city and elsewhere.

In Hong Kong, a pack of 20 cigarettes sells for between HK$50 and HK$60, whereas illegal ones can go for as little as HK$20 a pack.

The Post has learned that about 400 million seized cigarettes are still in government warehouses, pending court proceedings or follow-up investigations before they are destroyed.

“The seizure of black-market cigarettes is the beginning of one case and the destruction is the end,” a law enforcement source said.

He said destroying the illegal cigarettes sent an important signal that the government was committed to combating such illegal activities.

“It sends a strong message to syndicates behind the black-market cigarette trade that their multimillion-dollar goods will end up in landfill,” he said.

The secret operations were carried out about three times a month last year, supervised by a team from customs’ revenue crimes investigation bureau. Workers from the Environmental Protection Department helped with providing the pits to bury the contraband.

Every time customs officers seize contraband tobacco products, the items are sealed and stored at warehouses run by the Government Logistics Department.

After completing all court procedures, a confiscation order is issued and the illegal cigarettes must be destroyed, usually within 90 days.

The contraband is taken to a landfill under escort, accompanied by at least two vehicles with armed customs officers.

“Different routes are used in each delivery and illegal cigarettes are delivered to different landfills in each operation,” another source said.

He said officers would remain at the landfill for hours, enduring the pungent odours, to ensure the cigarettes had been pulverised completely and mixed with sand and garbage before being buried in a pit as big as a basketball court.

Given the large volume of seized cigarettes in storage, the source said about 40 operations would be needed to destroy them all.

Last year, customs officers made several busts including one that uncovered the 47 million untaxed cigarettes in December – the largest seizure of illegal tobacco products in a single operation in two decades.

Hong Kong customs attributed the rise in such seizures to stringent Covid-19 measures at the world’s ports, which had seriously disrupted seaborne logistics supply chains for goods, including contraband.
#COVID-19  #Covid
Add Comment