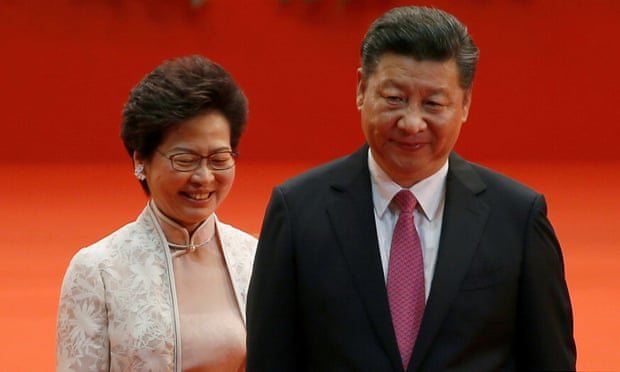 Carrie Lam to consult Beijing in attempt to protect city’s status as international finance hub
Hong Kong’s chief executive, Carrie Lam, has postponed a key annual policy address scheduled for Wednesday, claiming she must consult Beijing on some of her proposals.

The unprecedented delay to the speech was also attributed to plans by the Chinese president, Xi Jinping, to visit Shenzhen to mark the 40th anniversary of the special economic zone on Wednesday, which was announced only on Monday and which Lam would also attend.

Analysts told the Guardian there was a “palpable fear” of the central government downgrading Hong Kong as an international finance city in favour of Shenzhen, and Lam had little choice but to fit into Xi’s travel plans.

Lam told media on Monday her decision to postpone the address – potentially until November – was within the law and in the public interest because the economic recovery of Hong Kong required the support of mainland China’s central government.

She said she had put forward new proposals to the central government and it had only recently responded, inviting her to Beijing at the end of the month to discuss them. She said the measures, which she did not detail, required coordination with central government and she hoped to be able to deliver the speech by the end of November. “This is exactly the essence of one country two systems,” she said.

Willy Lam, professor at the Centre for China Studies at the Chinese University of Hong Kong, said the hold-up showed “further integration” between Hong Kong and mainland China, and suggested it could be because Lam was trying to protect Hong Kong’s special status as a major international finance hub. “There is a palpable fear Hong Kong might be upstaged by Shenzhen.”

He said the last-minute delay to her policy address was “quite embarrassing”, and showed that Xi did not think Hong Kong was important enough to change his schedule to accommodate Lam’s long-scheduled policy speech.

“It’s quite unprecedented and it shows dramatically and graphically that Hong Kong’s status has been downgraded and she has to do everything within her means to please Beijing including making this change.

“Her fear that if she doesn’t make the change she won’t be able to meet Xi Jinping in Shenzhen and that would affect Hong Kong’s status.”

Kenneth Chan Ka-lok, a political scientist at the Hong Kong Baptist University and a former pro-democracy lawmaker, said the delay showed the policy address was no longer an internal Hong Kong government matter.

“For this one she has to seek endorsement and directions from Beijing, and people here are told accordingly so that there can be no mistake as to who is in charge and who is only following orders,” Chan said.

At the press conference Lam denied she was “waiting for directions” from the central government.

“It is a matter of responding to a positive indication from the central government that they have taken full account of the chief executive’s recommendations,” she said. “This is a very good opportunity that no chief executive would forgo.”

Hong Kong’s economy and political climate have dramatically declined after 18 months that included mass pro-democracy protests, the Covid-19 pandemic, and a Beijing-led crackdown on dissidents including the sweeping national security law.

Lam has rejected international criticism and sanctions, and called for trust in the governments of Hong Kong and mainland China.
#COVID-19  #Covid
Add Comment