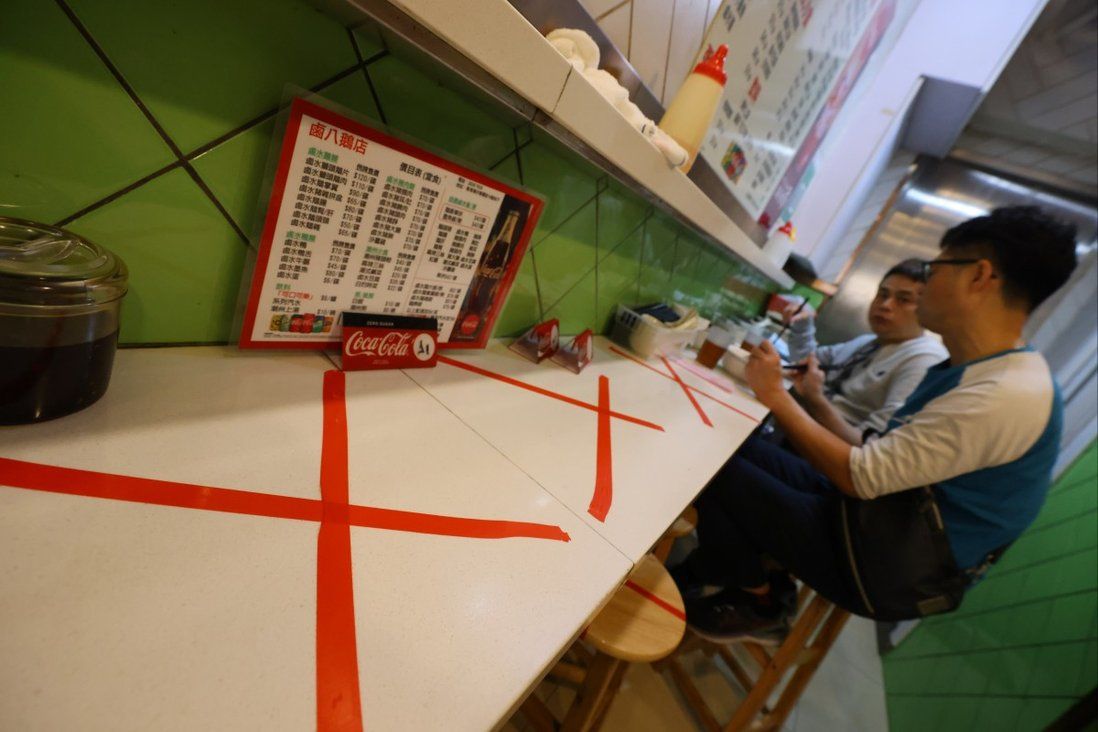 Further reduction in number of diners per table at eateries could see businesses struggling to survive, according to restaurant federation leader.
Hong Kong’s business leaders are worried about the possibility of more stringent social-distancing rules being unveiled on Tuesday to better contain the Covid-19 pandemic, as further curbs could hurt restaurants and retailers as well as lead to a rise in unemployment.

The city has already shut 15 types of venues such as gyms, beauty parlours, bars, nightclubs and karaoke rooms since January 7, but health authorities are preparing to impose even tighter curbs to cope with record-breaking daily infection numbers.

Hong Kong reported another 342 Covid-19 infections on Sunday, marking the second day in a row the number of cases has surpassed 300.

“Social-distancing measures or tightening [the rules] are important to cut [the flow of people],” Chan said at a press conference on Saturday. “We must cut down the flow of people. We must stop people’s activities and we must work from home.”

While details of the tighter curbs are set to be announced on Tuesday, health minister Chan said the government was already ironing out the legal aspects to allow authorities to impose the measures on a wider range of premises.

She hinted that the number of people at gatherings – which now stands at four people – could be “adjusted”.

Hong Kong’s unemployment rate hit 3.9 per cent in the final three months of last year, down 0.2 percentage points from the period between September and November.

Unemployment rates by sector had also dropped as the labour market improved prior to the fifth wave of infections. The catering and retail sector decreased by 1 and 0.9 percentage points to 5.9 per cent and 5.2 per cent, respectively.

But labour secretary Law Chi-kwong warned that extended Covid-19 social-distancing measures could lead to a rise in joblessness.

Simon Wong Ka-wo, president of the Hong Kong Federation of Restaurants and Related Trades, said he was worried that if the government limited all restaurants to two people per table, it could further hurt the sector.

“If the government still bans dine-in after 6pm, and with such restrictions, I am worried that many restaurants can’t survive,” Wong said. “The measures will affect many other industries. The unemployment rate will definitely jerk up.”

He also urged the authorities to announce relief measures for affected sectors right away, to calm people’s fears about losing their jobs.

Chief Executive Carrie Lam Cheng Yuet-ngor on Friday said she was set to announce the sixth round of epidemic-relief funding worth HK$20 billion (US$2.56 billion) for sectors affected by social-distancing closures.

With shopping malls and public transport remaining two of the few exceptions in an extensive list of stringent social-distancing measures imposed on venues, retail sector lawmaker Peter Shiu Ka-fai said he feared that requiring patrons to show their vaccine records at the former would be inconvenient and difficult to implement.

“Many shopping malls are connected to MTR stations, office buildings, residential towers, it would be tough to impose such a rule,” Shiu said.

Respiratory expert Dr Leung Chi-chiu said that placing curbs on public transport or shopping malls “would not do much to bring down cases” but urged residents to instead stay at home as much as possible.

“With the exponential rise of cases, we need to limit people from going out of their homes,” Leung said. “Otherwise, cases would jump to a point of no return and no amount of Social distancing would help to bring down infections quick enough.”
#COVID-19  #vaccine  #Covid
Add Comment