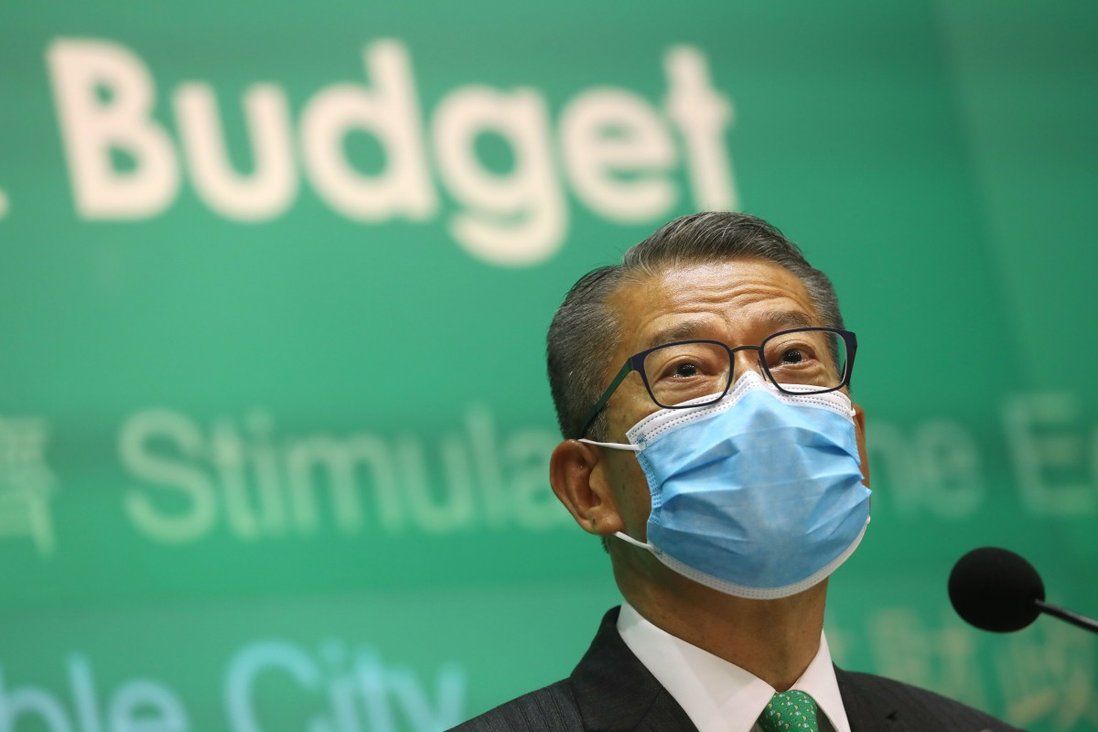 Hong Kong’s finance chief has unveiled a spending blueprint with fewer but more-targeted relief measures, including an unprecedented digital voucher scheme for residents to spur consumption, while forecasting a substantial recovery from recession that could see economic growth of up to 5.5 per cent in the year ahead.

Presenting a budget focused on reviving the economy and easing the burden on a population struggling under the Covid-19 pandemic, Financial Secretary Paul Chan Mo-po on Wednesday warned of a record deficit of HK$257.6 billion (US$33.14 billion) for the current fiscal year and more annual deficits ahead as he scaled down relief measures by a third.

After trying to manage expectations over the past weeks by ruling out cash handouts, Chan had only HK$80 billion worth of sweeteners to announce this time – down 33 per cent from last year’s HK$120 billion.

“I often chat with people, especially during the preparation for the budget,” he said in a speech read out in the Legislative Council. “I know how difficult it is to earn a living during the economic downturn. I can feel their pain. This is why, despite a record high fiscal deficit in 2020-21, I once again propose a budget involving a deficit of over HK$100 billion.”

One of the eye-catchers in the spending blueprint was a revenue-raising step that has not been attempted by his predecessors: Chan announced the government would increase the stamp duty for stock transactions to 0.13 per cent from the existing 0.1 per cent. That is expected to generate additional revenue of HK$12 billion in the first year of implementation.

In two other unprecedented initiatives confirming exclusive reporting by the Post, every adult permanent resident and new immigrant from mainland China will be given HK$5,000 (US$645) in vouchers to spend domestically, while jobless Hongkongers will be offered a one-off, virtually interest-free personal loan of up to HK$80,000.

The “100 per cent Loan Guarantee for Individuals Scheme” will be open to Hongkongers who are jobless or working freelance and provide proof of lost income, allowing them to borrow amounts six times their average monthly income when they were last employed. 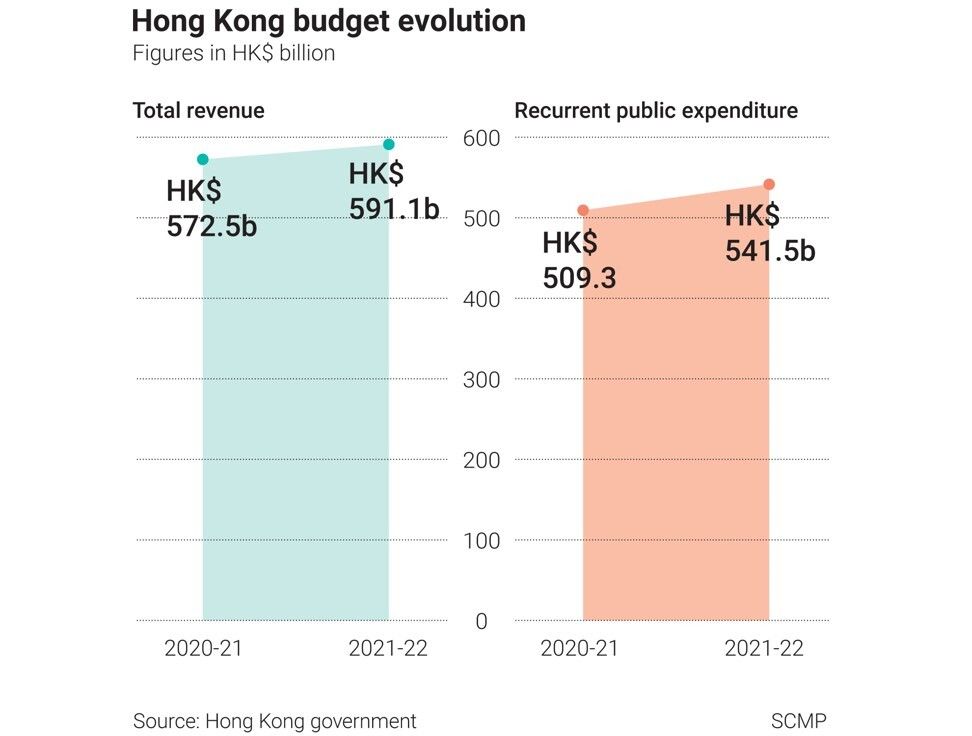 The digital vouchers, contrasting with previous cash handouts that recipients were allowed to save, will be issued in instalments to an estimated 7.2 million eligible people and will come with spending strings attached this time to ensure the money is pumped back into the local economy.

“[The budget] aims to alleviate the hardship caused by the economic downturn and the epidemic through the introduction of countercyclical measures costing over HK$120 billion, and seeks to create a leverage effect to benefit our people, workers and enterprises,” Chan said. 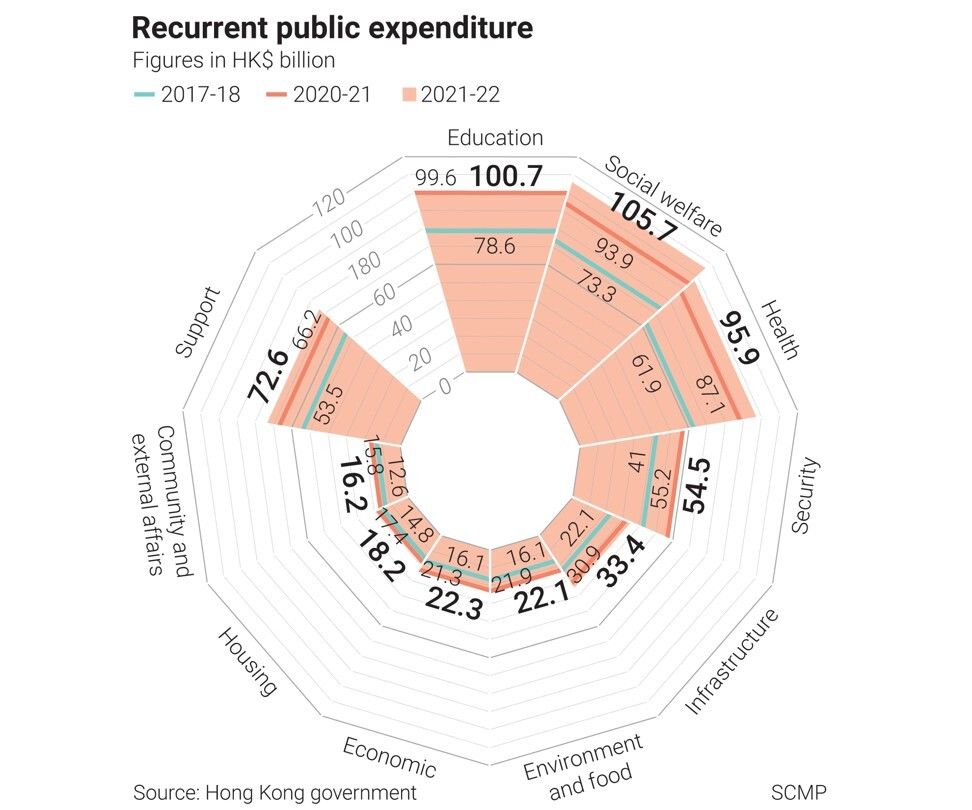 He announced plans to expand the issuing of green bonds to HK$200 billion, from HK$100 billion. Hong Kong and mainland authorities would also seek to allow cross-border trading of bonds this year, he added.

In addition to strengthening its role in the Greater Bay Area development, the city would actively pursue joining the Regional Comprehensive Economic Partnership, a trade alliance of 15 Asia-Pacific nations, Chan said.

With unemployment at a 17-year high of 7 per cent, Chan allocated another HK$6.6 billion to create about 30,000 jobs that would last for up to 12 months, following up on a similar scheme rolled out last year.

“In the wake of the huge deficit, we have tried our best to cater to different needs,” he said later at a press conference. “I have to say sorry to middle-class friends, as we have to take the meal depending on the food available.” 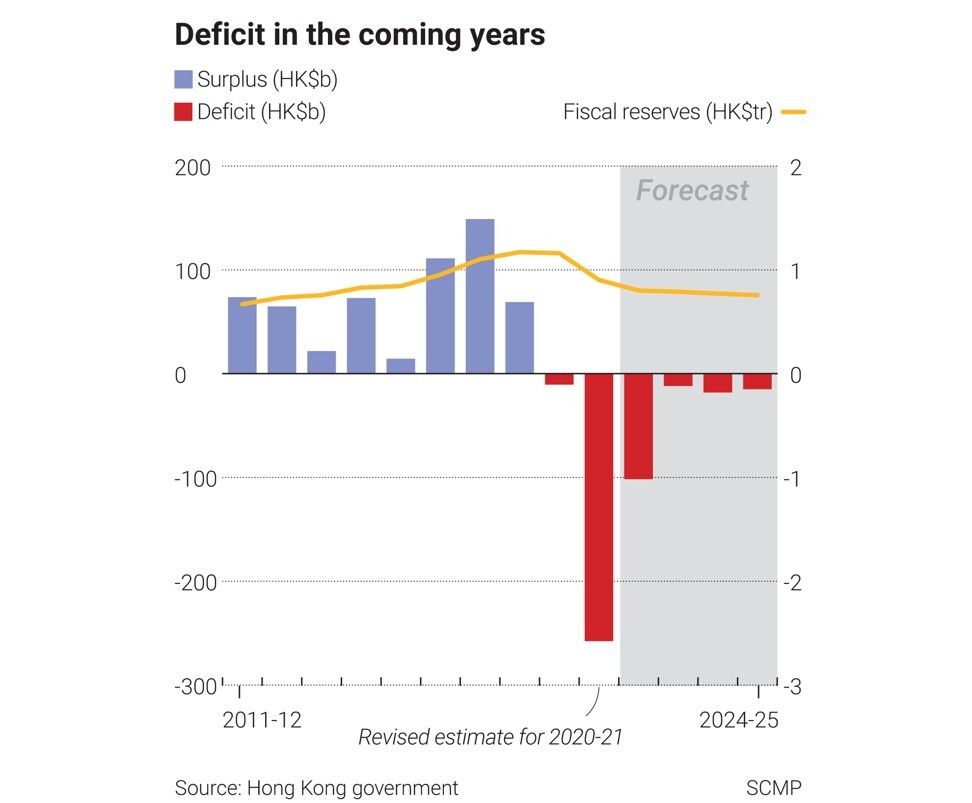 A new spending category not mentioned in Chan’s speech was the allocation of HK$8 billion for protecting national security, following the imposition of the Beijing-decreed law last June.

Chan’s significantly optimistic economic growth forecast of 3.5-5.5 per cent this year came with a reminder that this would hinge on vaccination drives and progress in containing the pandemic both locally and globally. He also pinned his optimism on mainland China’s strong economic recovery.

“As cross-boundary movement of people and tourism activities take time to get back to normal, the economy will still face significant challenges in the first half of the year,” he said.

“Nevertheless, as long as the community gathers together to control the epidemic and social stability is maintained, economic recovery is likely to gain a stronger momentum in the second half of the year in tandem with an expected rebound in the global economy.”

Elaborating further at the press conference, he said: “We are a small and open economy susceptible to influences of outside forces. Apart from the impact of the epidemic, we are also affected by China-US relations and geopolitics.

“We just hope the growth momentum will be stronger in the second half of the year as the Covid-19 situation becomes more stable.”

Chan forecast an operating deficit of HK$140 billion for the next financial year due to his countercyclical fiscal measures and the continued increase in recurrent expenditure.

Emphasising the importance of reducing expenditure and increasing revenue, he announced that all policy bureaus and departments would aim for trimming recurrent spending by 1 per cent in 2022-23.

Chan wrapped up his nearly two-hour budget speech on an emotional note, calling on Hongkongers to stay united in riding the storm and facing the challenges ahead.

“However harsh life may have been, Hong Kong remains the home that we treasure,” he said. “This unprecedented pandemic reminds us that we are all in the same boat. Deep-seated conflicts cannot be resolved instantly, nor can wounds be healed overnight. Given time, even the tightest knot can be untied.” 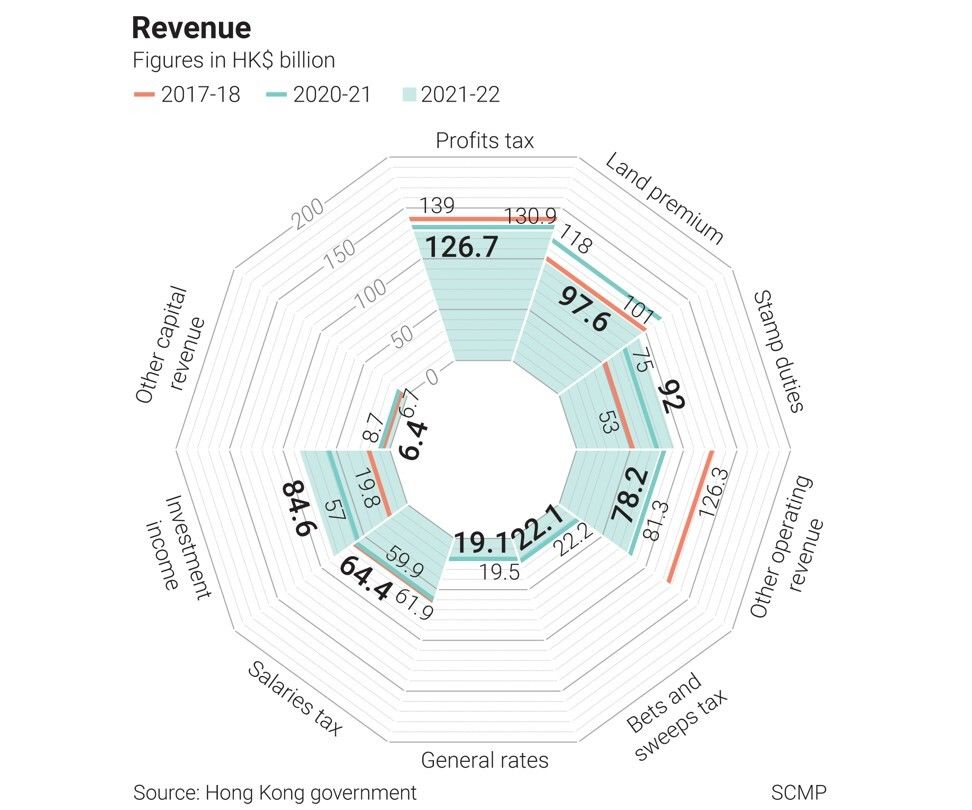 Pro-establishment political parties generally welcomed the relief measures in the budget, but expressed disappointment that no emergency funds were handed out to the jobless despite their repeated demands.

“Offering loans to them is never the best solution. It will only incur debts or may lead to abuse. I hope the government won’t close the door to cash subsidies,” said Starry Lee Wai-king, chairwoman of the Democratic Alliance for the Betterment and Progress of Hong Kong.

Lo Kin-hei, leader of the opposition Democratic Party, also cast doubt on the coupon scheme, insisting the government should have dished out cash to residents directly, especially when delivery systems had already been established over the past years.

“It is a waste of money and totally unnecessary for the government to set up a new mechanism again to roll out the vouchers,” he said, raising concerns that elderly and underprivileged residents would find it difficult navigating the use of the digital coupons.