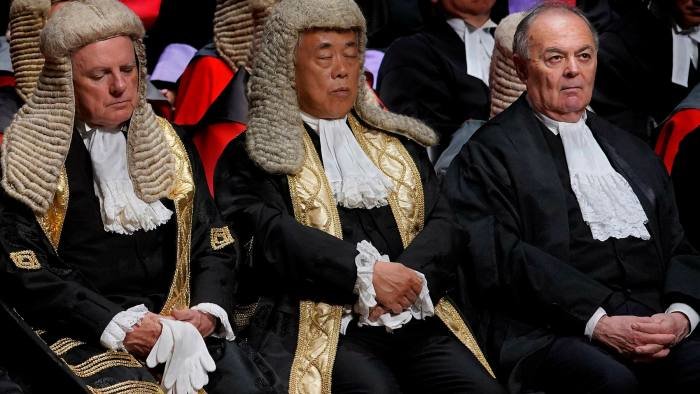 Hong Kong’s bar association has appealed to foreign judges not to abandon the city’s highest court in the wake of the national security law, saying their absence threatened the legal system’s credibility in the eyes of the international community.
Philip Dykes, the head of the association, said serving on Hong Kong’s Court of Final Appeal was a personal question of conscience for foreign judges, but their “high calibre” was “an ornament to the justice system”.

Mr Dykes made the comments after James Spigelman, a retired Australian judge, resigned as a non-permanent judge and as political pressure builds in the UK on judges to stop serving in Hong Kong.

Lord Reed, the president of the UK Supreme Court who also serves on the Hong Kong court, said the role of British judges was under review in light of the new law.

Beijing’s decision to enforce the national security law on Hong Kong has ignited concerns over whether the city’s respected judiciary would remain independent.

The law targets collusion, subversion and foreign interference with punishments of up to life in prison. It has been criticised for removing the legal firewall that separates Hong Kong from the rest of China by allowing suspects to face mainland courts.

There have also been fears that the security law would undermine Hong Kong’s claim to be Asia’s premier financial centre. Analysts have warned that anything that compromised the territory’s legal system would spook global firms based in the city.

Mr Dykes, who sits on a committee of lawyers and government officials who recommend appointments of non-permanent judges for confirmation by the city’s chief executive, has pleaded with judges from the UK, Australia and Canada to continue serving.

“Lord Neuberger [a former president of the UK’s Supreme Court who served in Hong Kong as a non-permanent judge] made a speech saying . . . the NPJs are the canaries in the coal mine,” Mr Dykes told the Financial Times. “You know what the canaries do, they drop dead at the first whiff of carbon monoxide gas.”

Mr Dykes said Mr Spigelman’s resignation and any further departures of NPJs would lead to the international community concluding that there was something “seriously amiss” in Hong Kong.

While other NPJs such as Robert French, a former Australian High Court Chief Justice, said they would not resign, one NPJ told the Financial Times that they agreed with Lord Reed that their continued service depended on how the national security law was applied.

Two of the British judges who sit on the Hong Kong Court of Final Appeal have confirmed they are still members. Lord Phillips, a former president of the UK’s Supreme Court, confirmed to the FT he remained a member of the court while Lord Hoffman, a former Law Lord, said he was not aware of any other imminent resignations.

“I am at present scheduled to sit in the [Court of Final Appeal] in November and, Covid permitting, I shall come,” Lord Hoffman said.

No serving UK judge has been scheduled to sit in Hong Kong before November this year.

On Monday, the Hong Kong government announced the appointment of Lord Patrick Hodge, a Scottish jurist and UK Supreme Court deputy, to the city’s Court of Final Appeal.

Pui-yin Lo, a barrister who specialises in constitutional and human rights law, said the reputation of the legal sector was at stake if the territory failed to recruit NPJs.