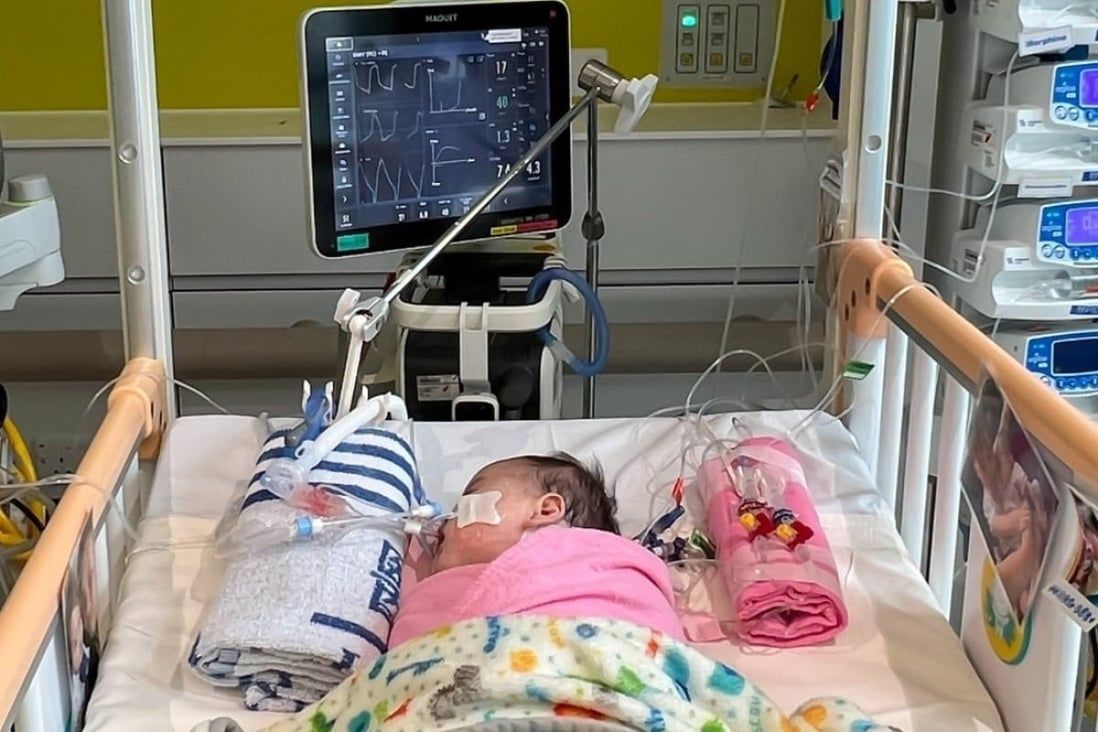 Four-month-old Cleo Lai underwent a successful heart transplant at Hong Kong Children’s Hospital on Friday night.
Hong Kong’s health secretary has expressed hope of establishing a long-term mechanism for cross-border organ imports to help more patients awaiting a transplant in the city, after a local baby girl received a heart donated from mainland China in the first arrangement of its kind.

Secretary for Health Lo Chung-mau was referring to the organ donation involving a child who died in an accident on the mainland to four-month-old Cleo Lai Tsz-hei, who suffered from heart failure and urgently needed a transplant to survive.

Cleo underwent a successful heart transplant at Hong Kong Children’s Hospital on Friday night, with the organ donated and delivered from the mainland in an unprecedented effort.

It was also the smallest heart transplanted in Hong Kong medical history. Cleo remained in the hospital’s intensive care unit on Sunday.

Hong Kong doctors on Saturday evening said the organ was from a “brain-dead child patient” who died in an accident on the mainland.

In a report late on Saturday, Xinhua said the heart was assessed to be suitable for Cleo after no suitable recipient in the mainland’s database matched.

Delivery of the heart took three hours, including the 48 minutes the mainland medical team took to remove it from the donor. The organ left the mainland hospital at 6.12pm on Friday, was transported by land and handed over to the Hong Kong side at 7.15pm. The heart reached Hong Kong Children’s Hospital at 8.13pm.

“It was the joint effort of some 24 mainland and Hong Kong departments and 65 medical staff personnel,” Dr Wang Haibo of the China Organ Transplant Response System (COTRS) was quoted by Xinhua as saying.

“It was a race against the longest storage time of four hours before a heart has to be transplanted.”

Wang is a member of the National Organ Donation and Transplantation Committee for China and also founder of COTRS.

Under the law, when organs are imported into Hong Kong, they must be accompanied by relevant certificates, which must contain information such as a statement that all applicable laws were complied with in obtaining the organ.

Dr Simon Tang Yiu-hang, cluster services director at the Hospital Authority, on Saturday said the donation and delivery of the organ was done in accordance with laws on both sides.

Hong Kong and the mainland’s health authorities have until now maintained separate networks for matching patients with donors.

But Lo revealed that more than 3,500 Hongkongers were on the COTRS database awaiting a transplant, according to the Xinhua report, and that close to 1,000 Hong Kong residents had received donated organs on the mainland.

Nine Hong Kong residents who died on the mainland had also donated their organs, saving the lives of 24 patients across the border, he said.

“Professor Lo said … it was hoped [Cleo’s] case could help establish a long-term mechanism and include Hong Kong’s hospitals into COTRS in order that organs donated by [mainland] citizens could be used to save Hong Kong and mainland residents’ lives,” the Xinhua report said.

In his official blog on Sunday, Lo appealed for organ donations, saying transplant numbers had experienced a downward trend in the past three years because of Covid-19. As at the end of September, close to 3,000 patients were awaiting an organ transplant in the city, he said.

Human rights groups have in the past accused Beijing of forcibly harvesting organs from inmates, including political prisoners. For years, mainland hospitals relied on their own connections to find donations, which opened the system to abuse.

In 2013, Beijing introduced a centralised database to regulate the process, and banned taking organs from prisoners in 2015.

But concerns persist. The International Society for Heart and Lung Transplantation, an organisation with more than 3,700 medical practitioners from over 45 countries, issued a statement in April saying organ donations from the mainland should not be accepted.

While the children’s hospital does not belong to the society, Queen Mary Hospital, a local leader in organ transplant surgery, is a member.

In a reply to Post inquiries, a Hospital Authority spokesman said it had no further comments beyond those made by Tang on Saturday.
#COVID-19  #Covid
Add Comment