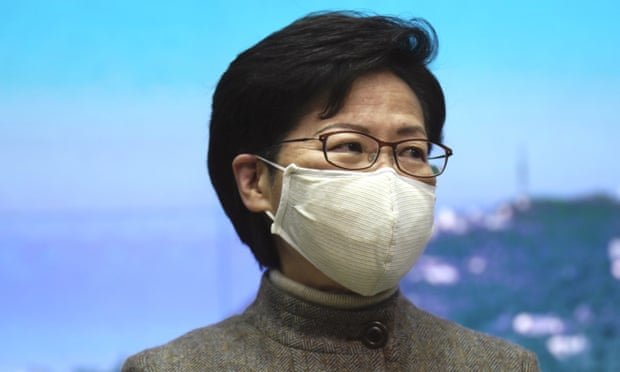 City’s leader accuses foreign critics of double standards when they condemn rioters in the US but support pro-democracy protesters in Hong Kong
Hong Kong’s leader has defended the unprecedented mass arrest of opposition figures last week, and accused western powers of hypocrisy for condemning the siege on the US Capitol after supporting pro-democracy protests in Hong Kong.

At a weekly press briefing in Hong Kong on Tuesday, Carrie Lam was asked about the coordinated police raids last Wednesday, when 55 opposition figures were arrested on suspicion of breaching the national security law by holding unofficial primaries ahead of the since-postponed Hong Kong election. The raids were the latest use of the national security law against the pro-democracy movement.

“Everyone is equal before the law and no one is above that.”

Lam echoed the comments of authorities in mainland China last week, pointing to the violent siege on the US Capitol building to claim foreign critics were displaying double standards by condemning the violence after having supported Hong Kong’s protests.

“I ask foreign audiences to set aside their double standards. It seems like if they look at affairs of Hong Kong and of the mainland they use a very different standard than the one applied to their own country,” she said.

Lam said the 2019 protests in Hong Kong saw “rampant violence and riots” which overseas commentators and politicians condoned or encouraged “under the guise of democracy”.

“When the same thing seemed to happen in their own country, they immediately took a very different approach to condemn the violence, and some said that this was verging on sedition in American society,” she said.

The pro-democracy protests in Hong Kong began with peaceful marches of millions, and over months descended into sometimes violent clashes with police. Protesters were demanding the right to a full vote, and drew support from overseas.

The attacks in Washington – labelled by lawmakers as an attempted insurrection – were led by a pro-Trump mob and sought to stop the certification of the US election result.

Wednesday’s arrests in Hong Kong more than doubled the number of people detained under the national security law – the vast majority of whom have been accused of non-violent acts advocating independence or protesting against the Hong Kong and Beijing governments.

On Tuesday Reuters reported more action was likely, as Beijing seeks to further stifle any potential challenge to its hardening rule over Hong Kong. Citing two unnamed officials with “extensive high-level experience in Hong Kong affairs and represent[ing] Beijing’s interests”, it reported more tough moves would be rolled out for at least the next year, including changes to the political system to reduce the chance of a democratic majority – or even an influence – on the election.
Add Comment