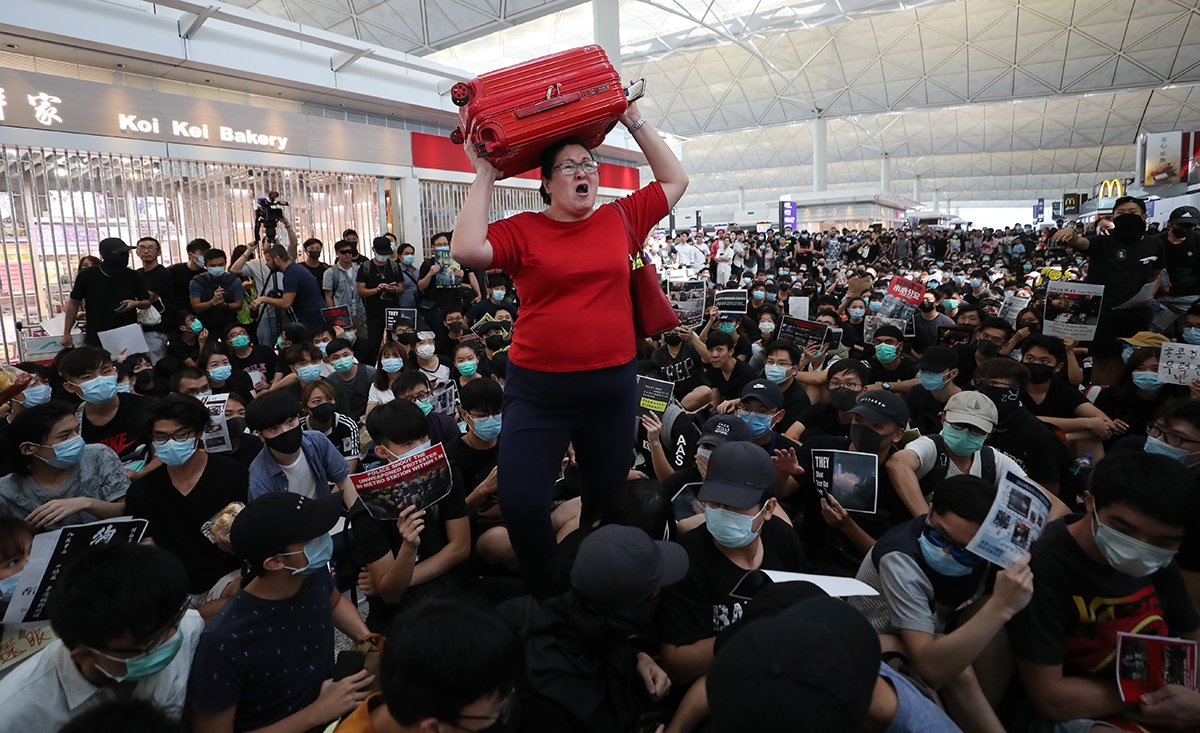 Monthly passenger numbers at Guangzhou airport edged ahead of Hong Kong for the first time in August, while Shenzhen airport also recorded gains. Hong Kong’s airport recorded its biggest decline in a decade last month, as anti-government protests have gripped the city.

Guangzhou surpassed Hong Kong International Airport in terms of the number of monthly passengers carried for the first time in August, while Shenzhen airport also reported a significant uptick in flight traffic, according to official data.

Guangzhou Baiyun International Airport said it welcomed 6.5 million travellers in August, an increase of 3.4 per cent compared with a year earlier, while passengers passing through Hong Kong airport plunged 12.4 per cent to six million amid ongoing protests.

Shenzhen Bao'an International Airport boosted freight traffic by 7.1 per cent, handling 110,000 tonnes of cargo in August, despite trade tensions between China and the United States. The airport said on Sunday it also carried about 4.6 million travellers last month, a 5.8 per cent year-on-year increase.

But analysts cautioned that increased air traffic through Guangzhou and Shenzhen was not necessarily linked with the unrest, as the airports have invested heavily in long-haul flights, eating into Hong Kong’s traditional business.

“There hasn’t been that big of a bump on traffic for both China Southern Airlines and Air China in recent months, which you’d see if the displaced traffic from Hong Kong directly went to Shenzhen or Guangzhou,” said Luya You, an aviation analyst at the Bank of Communications.

As of Monday, shares of Hong Kong’s flag carrier, Cathay Pacific, have declined almost 5 per cent, but at the peak of its crisis involving the mainland's aviation regulator, its stock had declined 13 per cent.

By contrast, Guangzhou airport's share price has risen 28 per cent, closely matched by Shenzhen, up 26 per cent.

Year to date, Guangzhou airport's shares have risen 102 per cent, Shenzhen by 38 per cent, while Cathay Pacific shares have declined 6 per cent.

The international airports of Hong Kong, Shenzhen and Guangzhou, fall within 150km of each other and they are all jostling to become the main air gateway for the Pearl River Delta and are key to the Greater Bay Area.

Guangzhou, which has been chasing after Hong Kong’s aviation success for years, was ranked the 13th busiest by passenger traffic last year, just four spots behind Hong Kong, according to the Airports Council International. It is also home to FedEx’s Asia-Pacific hub.

Shenzhen, traditionally a domestic flight hub, has been the most aggressive in pursuing international expansion. Generous subsidies have helped connect it to 30 international flight routes, including Brisbane, Brussels, Vancouver and Zurich.

It also has the backing of China’s central government, which approved a 9.35 billion yuan (US$1.3 billion) investment to build a third runway that is expected to handle 80 million passengers a year by 2030.

Within the Pearl River Delta, Hong Kong is still the largest air traffic hub, handling 74.6 million passengers in 2018 compared with 69.7 million in Guangzhou and 49.3 million in Shenzhen.