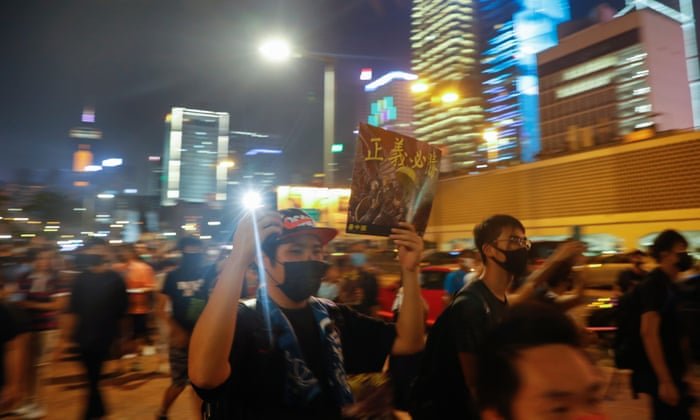 A man handing out leaflets for a Hong Kong pro-democracy protest was attacked by a knife-wielding assailant who slashed his neck and abdomen, days after a leading activist was left bloodied in another street attack.

The injured 19-year-old, wearing black clothes and a black face mask, was stabbed on Saturday near one of the large “Lennon Walls” that have sprung up around the city during months of demonstrations, police said.

Local media images showed the man had been severely injured in the afternoon incident in the north-eastern Tai Po district. Footage posted on social media showed another man holding a knife shortly after the attack and shouting: “Hong Kong is part of China ... [You] messed up Hong Kong.”

The victim was conscious when he was rushed to hospital for surgery. Police confirmed a 22-year-old man had been arrested.

“The man suddenly rushed to my friend and slashed [him] in the neck. Then my friend ran away towards this direction. After that he fell down and was stabbed in the abdomen with a knife,” an associate of the injured man told media at the scene.

Plastered in colourful sticky notes, posters and slogans, Lennon Walls have appeared in more than a hundred locations around Hong Kong, often in pedestrian tunnels or near subway stations. Though the walls are seen as a peaceful protest method, they have also become flashpoints for violence.

Protesters defied authorities with an illegal march on Sunday, their numbers swollen by anger over the recent stabbing and beating of two pro-democracy protesters.

The rally of tens of thousands began peacefully but quickly descended into chaos as small groups of hardcore protesters hurled petrol bombs at a police station, subway entrances and at branches of banks based in the Chinese mainland. Police responded with multiple volleys of teargas.

At one point, a water cannon truck chased thousands of protesters down Nathan Road, one of the city’s busiest shopping thoroughfares, leaving it streaked with blue dye from the vehicle’s turrets. The dye, used to identify protesters, also contains a pepper solution that burns the skin on contact.

As the protesters fled the streets, frontliners stayed behind to slow the advance of riot police, setting fire to makeshift barricades.

Tensions were running high after the leader of the group organising the weekend rally, Jimmy Sham, was taken to hospital after being injured by men wielding hammers earlier in the week.

The Civil Human Rights Front, which Sham leads, had applied for permission to hold a peaceful rally on Sunday calling for an independent inquiry into police brutality and universal suffrage, but their request was rejected by police.

More than four months of huge and increasingly violent protests in Hong Kong were initially prompted by a now-scrapped bill that would have allowed extraditions to mainland China. They have since snowballed into a wider movement calling for greater democracy and police accountability after Beijing and local leaders took a hard line.

Several pro-democracy activists have been attacked by pro-Beijing supporters in recent months, and Sham was also assaulted in August.

As the situation has escalated, hardcore pro-democracy protesters have also begun meting out violence against people who vocally disagree with their goals or are viewed to be government loyalists.
Add Comment