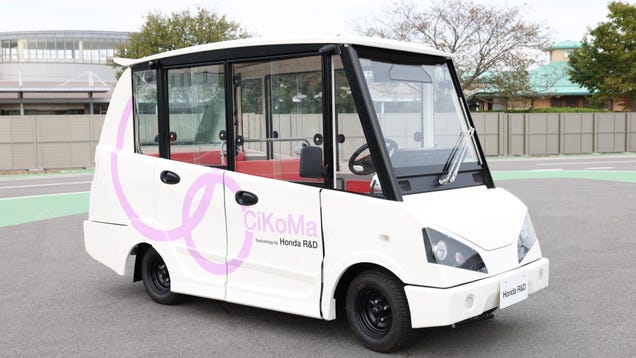 Honda is testing out tiny autonomous cars in Japan that are meant to appeal to old and young people alike. The so-called “micro-mobility devices” are part of Honda’s attempt to branch out to those who can no longer drive themselves or are otherwise uninterested in cars, such as the elderly or the members of Gen Z.

Honda is testing out tiny autonomous cars in Japan that are meant to appeal to old and young people alike. The so-called “micro-mobility devices” are part of Honda’s attempt to branch out to those who can no longer drive themselves or are otherwise uninterested in cars, such as the elderly or the members of Gen Z, according to Bloomberg.

Japan is currently undergoing a shortage of workers as folks retire and exit the workforce; many of them are no longer able to drive themselves to work, and have withdrawn from social settings for the same reason. Honda’s small AVs could help older people rejoin society, and also help them regain their mobility safely with Honda’s CiKoMa and WaPOCHI, which are passenger cars and a robot that tracks and helps pedestrians navigate a given setting.

What the CiKoMa ride-in micro-mobility vehicle can do

Honda cites Japan’s aging population, declining birthrate and the global pandemic as a few of the reasons why it sees the need for small self-driving EV and AVs, which people can hail and even depend on for basic transportation.

Honda recently started testing out its micro-mobility device at public parks in Japan, where the automaker says automotive AI has difficulty traveling over unclear roads and paths. The four-passenger model being tested is one of the larger AV models, known as CiKoMa, but Honda plans to make single and multiple passenger versions of these micro cars by 2030. Well, “devices” would be more appropriate since people won’t drive these in the traditional sense.

Riders will simply call on CiKoMa, and wait as the car drives itself to the rider using a suite of AI hardware, including camera arrays that eliminate the need for high-definition maps. CiKoMa will not rely on maps or servers that transmit remote data; the tiny robot car will rely on sensors to produce local data that’s immediately and constantly analyzed to help it “decide” a route and even make suggestions. It’s closer to what many would consider a true self-driving car; the big difference is that Honda’s tiny machines are not easily recognizable as cars.

In their current state, Honda’s micro AVs look more like golf carts or UTVs. But Honda thinks these machines have a place in cities and urban environments of the future. Golf carts have proven useful in certain settings outside of the golf course — even in the U.S., where small cars are becoming less and less popular.

Indeed, driving (or being driven in) a golf cart among large vehicles on public roads looks like a disaster waiting to happen. But Honda says this is what mobility for all looks like: a mixture of EVs and AVs driven by people who are still interested and capable of driving themselves, in, say, a Honda e, and a lineup of micro-mobility devices capable of recognizing riders or users through sight and biometrics.

Honda says CiKoMa and WaPOCHI will even be capable of having “human-like” exchanges. It’s unclear if Honda can develop these devices in eight short years, but, at least, it’s good to know that the spirit of ASIMO lives on in these robots.

Oh ya 82 days ago
World governments need to ban all self driving cars. If you are too lazy or cant drive yourself you should just us public transport. Tesla and all other manufacturers needs to stop this either voluntarily or by laws passed.
View all comments (1)Add comment