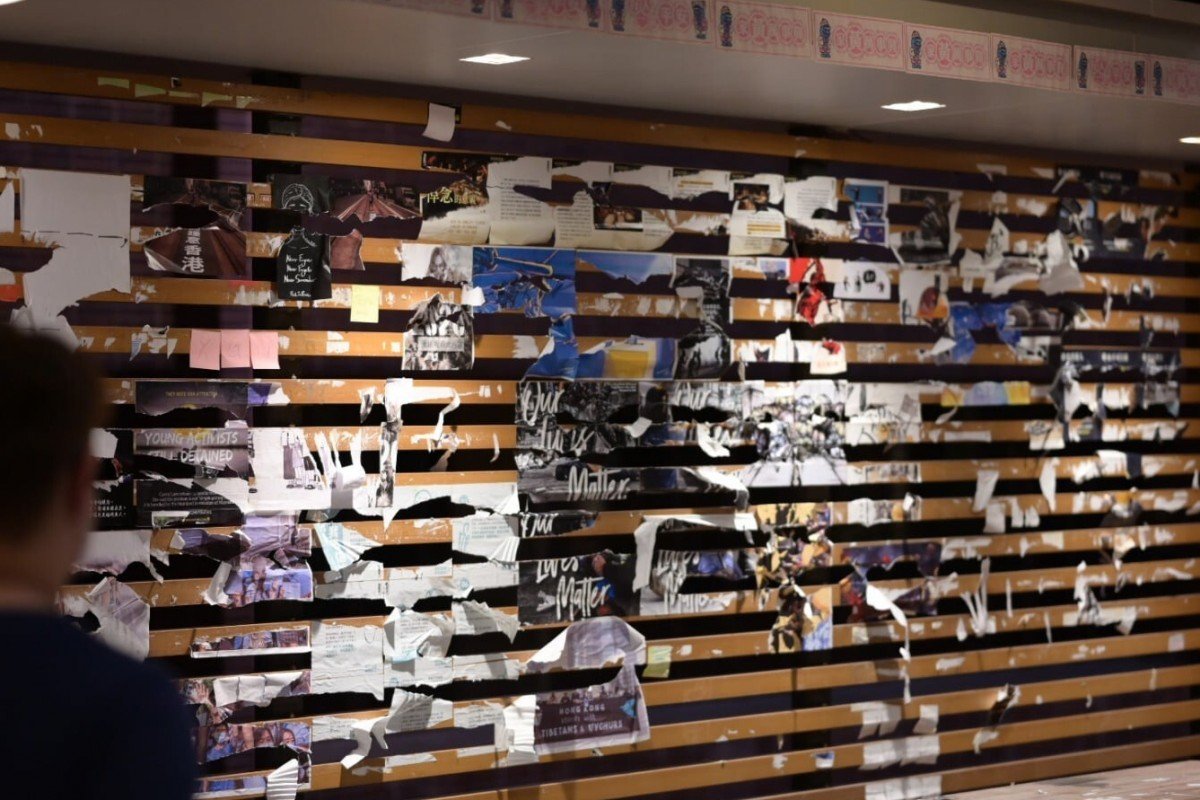 A so-called Lennon Wall at the University of Hong Kong containing notes of support for anti-government protesters was vandalised on Saturday night by about 30 people who claimed they were “cleansing” the campus.

The university student union has called on peers to join rebuilding efforts on Tuesday, warning of an “escalation of actions” if management did not pursue the case, while a spokeswoman for the institution said it was reviewing security measures.

Videos provided by a student and posted on the Facebook page of the union showed the group, comprising mostly middle-aged people, tearing up posters on University Street, where the student body and wall is located.

Some of the posters on the Lennon Wall called for “withdrawing criminal charges against all protesters” and described the mainland Chinese government as “Chi Nazi”, a derogatory term accusing it of human rights violation. 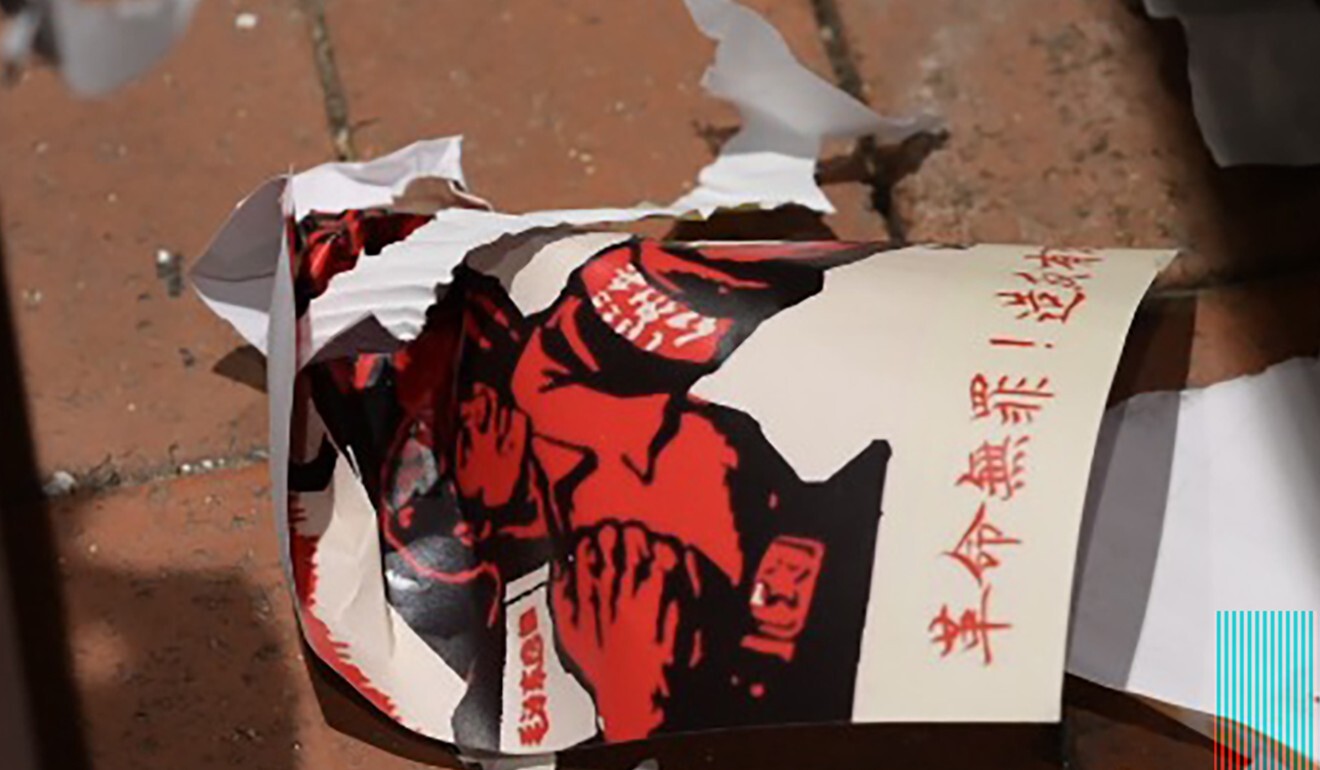 A torn message from the wall.

In another clip uploaded to the Facebook page of a group called “Hong Kong With One Heart” on Saturday night, a woman can be heard saying that she and her partners are “cleansing HKU” and “we don’t want our children to study in such a dirty university”.

The faces of those taking part in the action are blurred out in this video.

“We are a group of ordinary Hong Kong citizens. We don’t have leaders or organisations and we don’t get paid,” the anonymous woman says in the video.

“Hong Kong With One Heart” describes itself on Facebook as formed by a group of residents who “love the country and Hong Kong” and cannot tolerate “black violence”, referring to the actions of radical protesters amid the months-long social unrest last year, sparked in June by the now-withdrawn extradition bill. 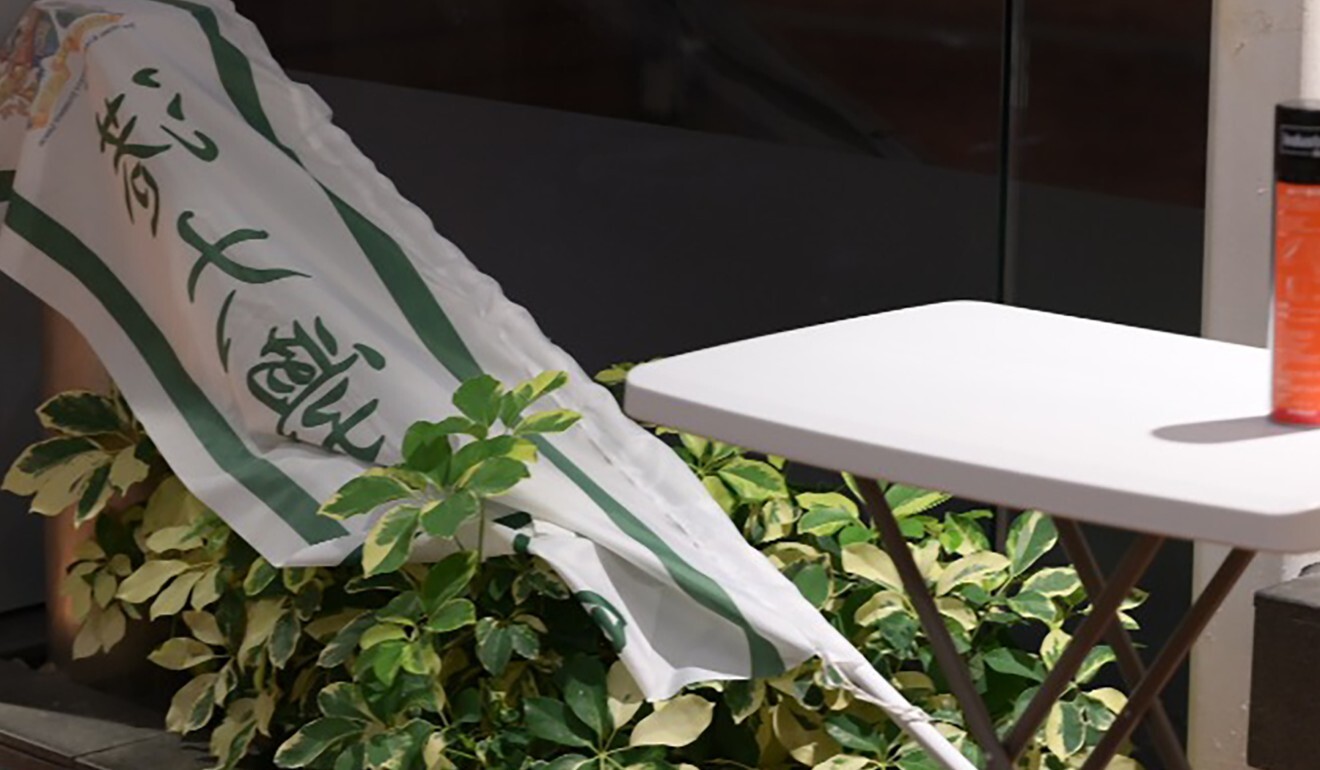 A banner is dragged down at HKU’s Lennon Wall.

It was the second time the Lennon Wall on the HKU campus had been vandalised since July this year. On July 11, at least eight white-clad people tore apart posters on the wall.

Lennon Walls throughout the city have been hotspots of conflict between opposing camps in a politically torn society, especially at the height of last year’s protest movement.

The original Lennon Wall was established in the 1980s in Prague, in the Czech Republic, and was covered with graffiti and lyrics inspired by the Beatles following the murder of band member John Lennon. 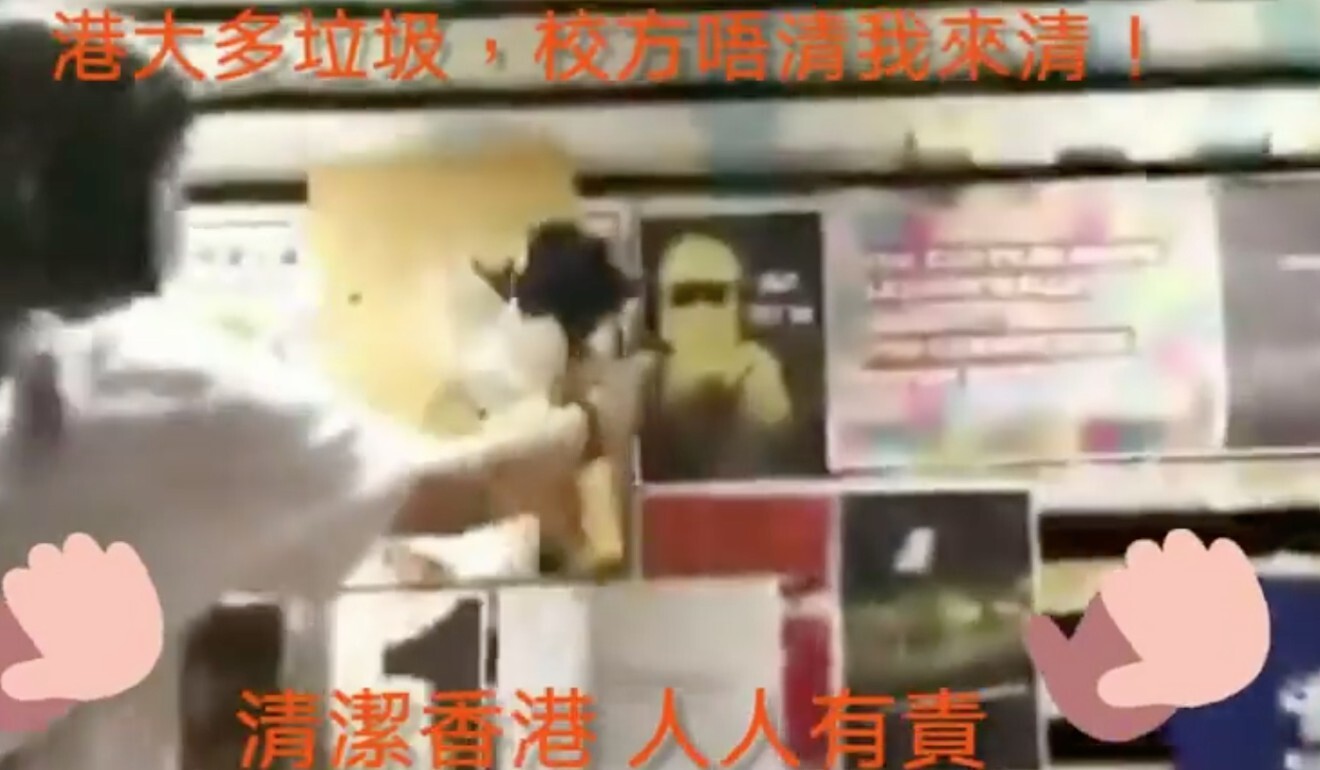 A screen capture of a video posted online showing people defacing the wall.

A university spokeswoman said at around 7pm on Saturday, more than 30 people walked from HKU MTR station to University Street, where they removed a batch of posters on the wall.

“When more security guards were called to the scene, the group started to leave,” the spokeswoman said. “The university deeply regrets that similar acts of destruction have repeatedly occurred on campus, and reiterates that damage to campus facilities and displays by any organisation or persons will not be tolerated.

“The university is reviewing the incident, as well as campus management and security measures, and does not rule out the possibility of pursuing further action.”

Student union president Jeh Tsz-lam said makeshift shrines for protesters who died as the movement raged last year, including those for Chow Tsz-lok, who fell from a car park in Tseung Kwan O as police and protesters clashed nearby, as well as the union’s flag were also destroyed on Saturday night.

In a statement issued on Saturday night, the HKU student union condemned the “uncivilised vandalism”, saying it was a manifested threat to freedom of speech.

“The union strives to safeguard the freedom of expression of students. We shall never tolerate any vandalism of the Lennon Walls. We shall stand firm against tyranny and self-censorship in this last bastion of freedom of speech,” the union said.

“The university should stand alongside students and assist the seizure of vandals, including providing CCTV footage,” the statement added. “If the university fails to respond to the incident, the union will call for escalation of actions.”

The union also said it reserved the right to take legal action against the vandals.