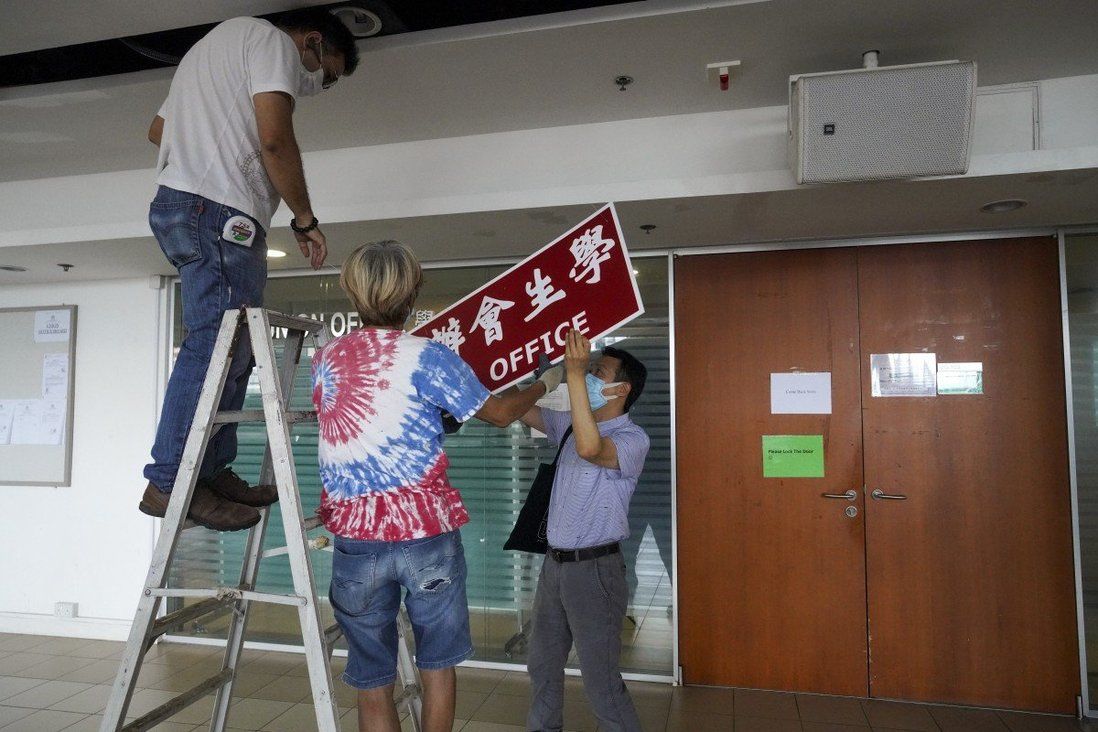 The students, under investigation for a resolution mourning the death of a police attacker, were given no chance to defend themselves, says governing council member who resigned over decision.

Insiders have said a University of Hong Kong decision to ban more than 30 student leaders from campus sidestepped normal disciplinary procedure, a move that has provoked concern among some and led to a member of the school’s governing body resigning.

Sources spoke to the Post shortly after HKU’s governing council on Wednesday ruled that all student leaders involved in last month’s passing of a resolution mourning the death of a man who stabbed a police officer would be banned from stepping foot on campus or using any of its facilities and services.

But HKU council chairman Arthur Li Kwok-cheung on Thursday said the decision was about risk mitigation for the university and should not be seen as disciplinary action. 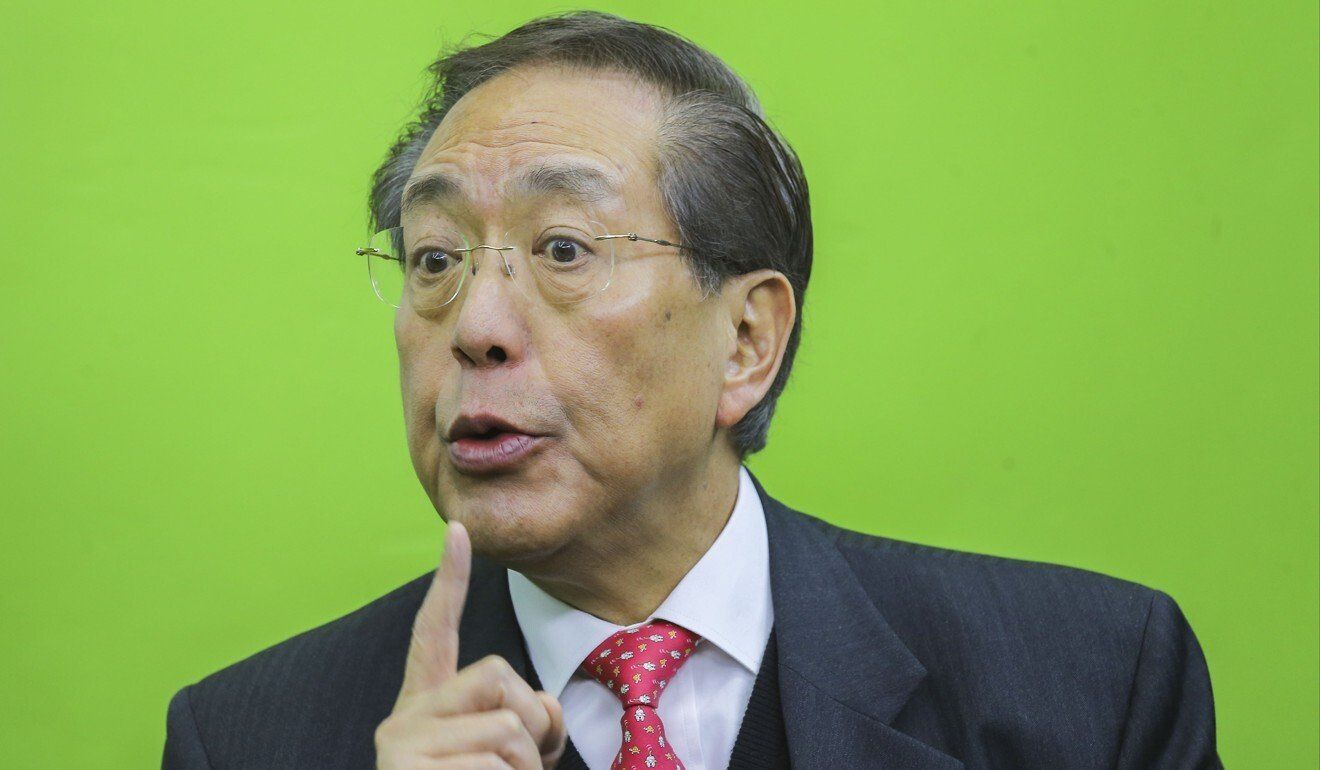 Cheung said he had asked the council to postpone the special meeting as it was arranged in an abrupt manner and he was unable to attend. He also asked if he could take a look at the report confidentially, but the council insisted on going ahead with the meeting without allowing him to do so.

“I told the council that I disagree with any punishment decisions they made, as the students involved did not have any chance to defend themselves through regular procedures,” he told the Post. “That was disappointing. The students were wrong, but they should be given a chance to explain.”

An HKU management source also said that, traditionally, a disciplinary committee would be set up by the university rather than having the council make its own punishment decisions.

The committee would include professors, students and legal advisers, who would handle the case independently, while the students involved would have the chance to defend themselves, the source added.

“But this time, it seems the council has bypassed some regular procedures and has directly ‘punished’ the students even though [they termed it] ‘precautionary measures’,” the source said.

“The university council, chaired by pro-government Arthur Li, seems to be making some top-down decisions.”

Edy Jeh Tsz-lam, a student representative on HKU’s governing council, characterised the decision on the punishment as “forming a judgment before the trial” given that the student leaders were not able to defend themselves. 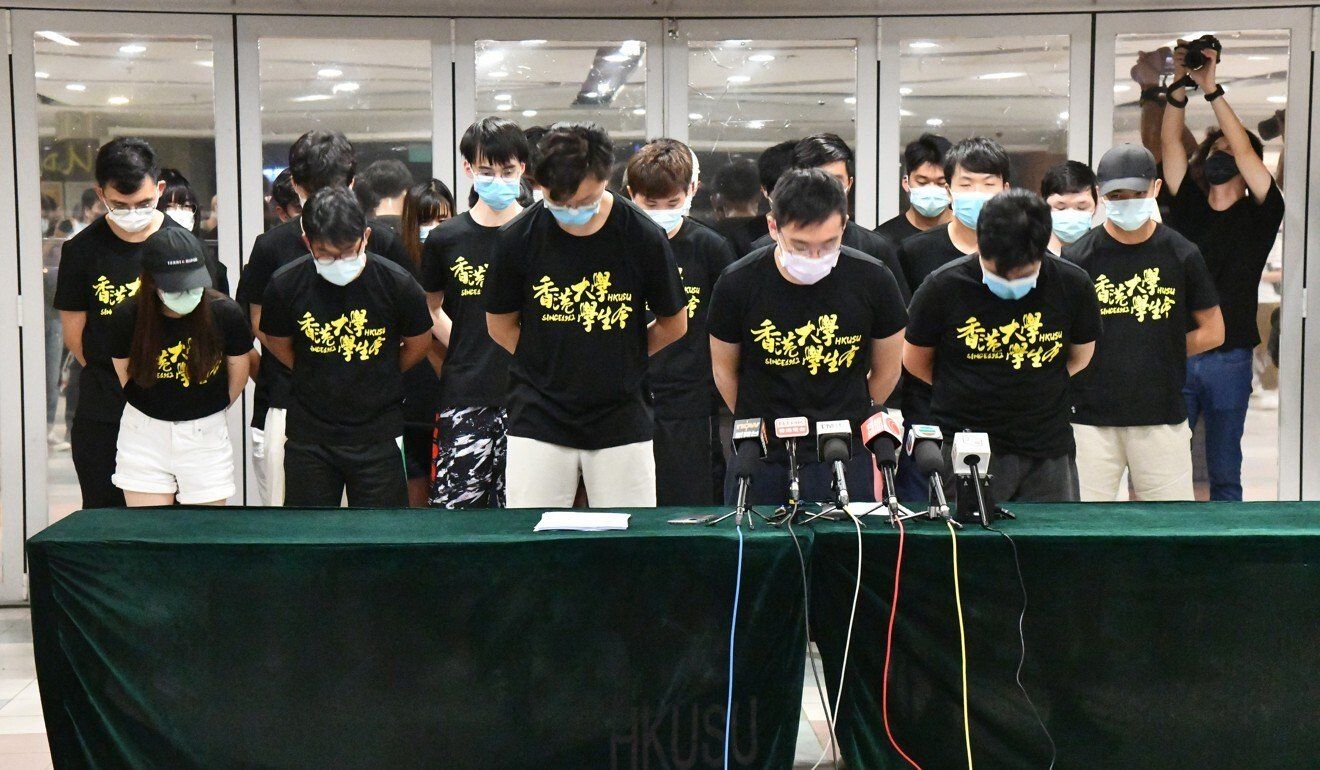 HKU student union leaders apologise after being criticised for passing a motion ‘appreciating the sacrifice’ of a man who stabbed a police officer before killing himself.

The governing body said that as the resolution – passed on July 7 but quickly withdrawn after an outcry – was under police investigation and could have broken the law, allowing the involved student union council members to move around freely on campus could put the university at legal and reputational risk.

According to another HKU source, the punishments were suggested by a five-member panel set up on July 27 by the council. The panel, however, was composed entirely of council members, including Dr Henry Chan Hin-lee, who oversaw the meetings.

“It was worrying that those on the panel making the final decision were also council members. There wasn’t much transparency in the process. The panel simply made its suggestions within eight days, with the school having a limited say,” the source added.

Another insider familiar with the HKU student union council noted that only 30 of the body’s more than 40 members had voted in favour of the motion, while two abstained. But since voting records were anonymous, it would be difficult for the university to know exactly who to enforce the disciplinary measures against.

Responding to the accusations, Li told the Post that the HKU council he chaired served as the university’s highest governing body, and overseeing risk management was one of its key responsibilities.

“Having considered the serious risks posed by the student union council incident to the safety, reputation and legal liability of the university, the HKU council decided to accept and endorse the panel’s recommendations on an immediate risk-containment measure to ensure that the risk is being effectively managed,” said Li, also a member of the Hong Kong leader’s de facto cabinet, the Executive Council.

“The council thereby requested the university management to execute the above risk-mitigation measure, which should not be treated as a disciplinary action.”

According to HKU’s governing ordinance, it is up to the vice-chancellor to determine if a complaint against a member of the university should be brought before a disciplinary committee.

A five-member panel consisting of three university representatives – normally professors or lecturers – and two students is then formed to discuss the case.

Details of the complaints and information about relevant past cases are to be presented to the panel 14 days before any hearings.

The involved students are then formally invited to a hearing where they are allowed to bring legal representation and given a chance to defend themselves. Students are welcome to challenge the decision if a punishment is administered.

Former student union leader Billy Fung Jing-en attended such a disciplinary hearing in 2015 after he was charged with public disorder by a Hong Kong court for storming a university council meeting.

Michael Davis, a former professor of human rights law at the university, said initiating disciplinary action at the council level had given the appearance of “top-down political interference” and could be perceived as encroaching on academic freedom.

“Students are young people and should be treated with respect. In this case, students may conclude that their due process rights are not being protected. Students who were not involved may also feel concern that any exercise of their basic freedoms is risky,” Davis said.

“This may create the impression that anyone on campus who writes or says something that the government disapproves of will be targeted. Such would not be conducive to academic freedom.”

Davis said he hoped the vice-chancellor and university administration would exercise restraint and inform the council of those concerns, both as a guard to institutional autonomy and to ensure the proper process was being respected in regard to student discipline.

Timothy O’Leary, formerly the head of HKU’s school of humanities and an ex-governing council member, said in the past if a staff member or student was accused of an offence, the council would have waited until the outcome of the full disciplinary process before taking action.

“Taking this action before conviction is new. It seems to deny the presumption of innocence for a person charged with an offence,” he said.

A group of HKU alumni on Thursday started an online petition demanding the governing council revoke the punishment against the student leaders over the “procedural and fairness issues”. The council, the petition argued, had no standing to directly penalise students under the school’s governing ordinance.

Meanwhile, seven HKU court members urged the council in an open letter to withdraw the ruling. It said the decision amounted to severe disciplinary action against students who they insisted had not violated the University of Hong Kong Ordinance.