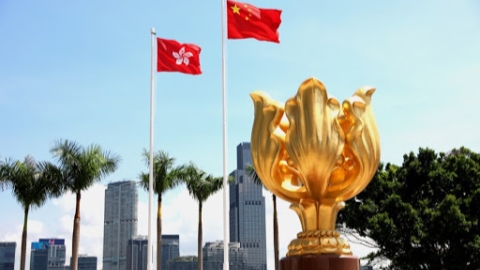 The government of China’s Hong Kong Special Administrative Region on Saturday strongly opposed and condemned groundless accusations by some foreign governments and entities against the decision of the Standing Committee of the National People’s Congress on the qualification of members of the HKSAR Legislative Council.

Such accusations were aimed at undermining the relationship between the central government and the HKSAR under “one country, two systems,” an HKSAR government spokesperson said in a statement.

The spokesperson described the accusations as flagrant interference that breaches the basic guiding principles of international relations.

As an inalienable part of China, the HKSAR is a local administrative region that enjoys a high degree of autonomy and comes directly under the central government, the spokesperson said.

Article 104 of the HKSAR Basic Law requires designated public officers including LegCo members to swear to uphold the Basic Law and swear allegiance to the HKSAR in accordance with the law.

Swearing allegiance to the system of the country and upholding national laws is an international norm for public officers and any breach of the oath will not be tolerated, the spokesperson said.

Those foreign political figures who made the accusations against the central government and the HKSAR government are clearly applying double standards.

The decision by the Standing Committee of the NPC is constitutional, lawful and necessary, which set out clearly the consequences of LegCo members violating the legal prerequisites of upholding the Basic Law of the HKSAR and swearing allegiance to the HKSAR, the spokesperson said.

Such consequences were also applicable to LegCo members who were confirmed in accordance with the law to be ineligible to be candidates for the LegCo election, which provided the solid legal basis for the HKSAR government to announce their disqualification.