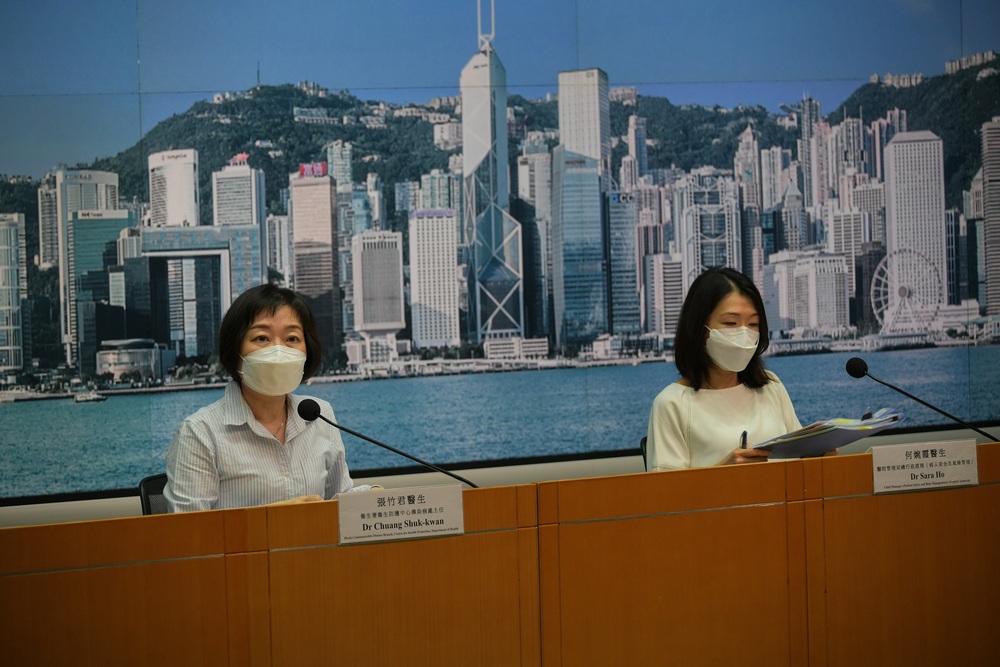 Hong Kong reported 284 new Covid-19 cases on Saturday as health authorities are looking into some leads between the outbreak clusters in a Hung Hom snooker club and a Sai Wan residential building.
Among the new cases, 116 were confirmed PCR tests, and 168 were positive rapid antigen test results reported by citizens. The Centre for Health Protection’s Chuang Shuk-kwan said the tally of the fifth wave of pandemic now stands at 1,195,616.

The Sky Cuisine cluster in Sheung Wan added 11 more cases, amounting to 39 guests -- 21 men and 18 women aged from seven to 90 -- from over 15 families in total. Two of the staffers were infected with the coronavirus as well.

One of the staffers lives at West Terrace in Sai Wan Estate, which was earlier locked down. Health authorities will see if the two outbreak clusters were linked, Chuang said.

Meanwhile, six more cases were added to the Sun Mong Club cluster in Hung Hom. Among the new cases reported today, two were staff members who prepared food and worked at the bar.

One staffer last went to work on Monday and tested positive two days later. As for the other four customers, they were throwing darts at that time, according to Chuang. The cluster now saw 10 customers and two staffers infected.

Twenty-two cases were identified at designated quarantine hotels between the third and sixth day of patients’ arrival. The last imported case involved a 31-year-old man arriving on May 1 from Thailand via Singapore. He tested positive on Thursday (May 12) with a CT value of 17 to 18, suspected to be a local case.

She continued that authorities detected another case involving the Omicron BA.4 variant. The patient was a 60-year-old woman who arrived in the city on Monday from the U.S. via Switzerland, and she suffered a sore throat upon her arrival already. So far, the city has seen three cases involving the new Omicron variant.

The Hospital Authority’s chief patient safety and risk management manager Sara Ho Yuen-ha reported one more death, pushing the city’s death tally to 9,147. The deceased patient was a 77-year-old woman who had no vaccination record.

Ho noted that public hospitals and treatment facilities are now housing 755 patients. Among them, three are in serious condition, and one in critical condition has been admitted to a hospital’s intensive care unit.

A total of 106 patients have recovered from Covid in the past 24 hours, and 80 of them have been discharged.
#Coronavirus  #COVID-19  #Covid
Add Comment