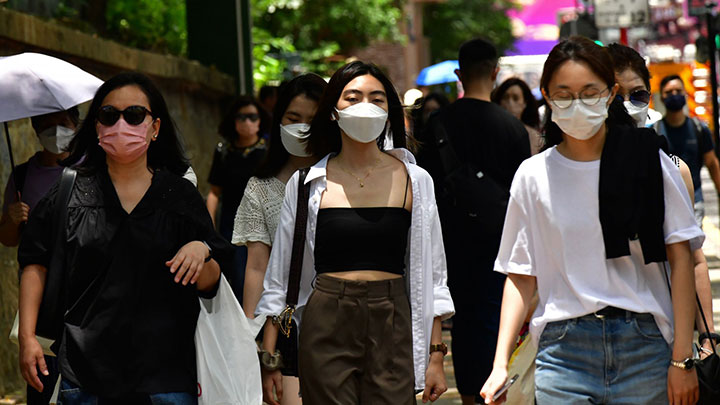 Hong Kong reported 2,992 Covid-19 cases on Sunday as health authorities said the number of BA.4 or BA.5 cases took less than one percent of the overall tally of the city.
Among the new infections, 2,773 were locally transmitted, including 1,194 confirmed via PCR tests and 1,579 verified positive RAT test results. The official caseload of the fifth wave now exceeded 1,258 million.

The remaining 219 infections were imported cases, according to Chuang Shuk-kwan from the Centre for Health Protection. Of them 115 were detected at the airport, 83 at quarantine hotels and 21 were patients identified in local communities after completing the seven-day isolation.

The imported cases saw 58 traveling from the UK and 22 from the US.

Chuang said the authorities have been doing genetic analysis, and although the number of local BA.4 or BA.5 cases has increased compared to late June, it counted only less than 1 percent of the overall tally. She believed that it may be because of the high transmission of the subvariant, and the authorities will keep monitoring the situation.

Three more residents and one staff member of Hong Chi Oi Tung Hostel were confirmed and 18 other residents had to be quarantined. The family of one of the students at Hong Chi Pinehill No.3 School tested positive and the class of four students will be suspended for one week.

Hospital Authority’s chief manager Gladys Kwan Wai-man reported two new deaths, pushing the death tally of the fifth wave to 9,199. The deceased involved a man and a woman aged 70 and 85.

Public hospitals and treatment facilities are now housing 924 Covid patients. Among them, 20 are in critical condition, 27 are in serious condition, and five are staying in hospitals' intensive care units.
#COVID-19  #Covid
Add Comment